Professional 360 video production is exploding in a big way. With the recent innovations in VR, there is now a high demand for immersive, high quality 360 content; not to mention the huge numbers of people watching 360 video on YouTube and Facebook. In order to create this content for the ever expanding VR audience, professional quality cameras are required to ensure that the 360 video is good enough to sell to millions of people.

Thankfully there are now more than a few option for those looking for a professional 360 camera. These cameras will be out of most peoples price range, but if you are looking to start shooting professional quality 360 video then these are the cameras you will need to use.

This outstanding 360 camera is designed for 1 purpose, to livestream crystal clear 360 video for as long as possible. The Orah 4i is a livestream capable 360 camera with a dizzying number of features that makes it the best in its class. Its 4 lenses combine to shoot 4k 360 video which it can also livestream to YoutTube, Facebook or any other livestream service.

What makes this camera special is the fact that you can plug it in and leave it livestreaming for up to 48 hours at a time, so you can capture whole weekend long events in 360 degrees should you wish. The camera is most suited for use at events where the hosts can connect to millions of people live and share their event in 360 degrees. 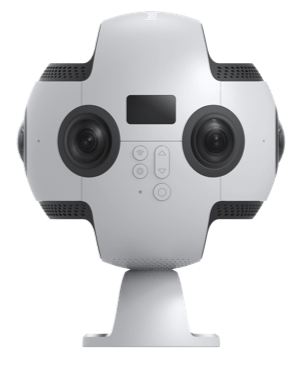 Insta360 have already created a 4K 360 camera as well as a 360 camera accessory for iPhone and Android, now they are taking their expertise to the next level and are releasing a professional 8K 360 camera. The Insta360 Pro looks set to shake up the world of professional 360 cameras by introducing 8K video quality at a relatively affordable price.

At just over $3K, the Insta360 Pro will be the most affordable professional 360 camera ever and it looks set to be one of the best aswell. Not only can it record full 360 video in 8K resolution, but it can also livestream 360 video and shoot in 3D too! The Insta360 Pro is marketed at those who want to create content for VR users, but who can’t afford the very expensive cameras available at the moment. I’m really excited about this camera and can’t wait to try it. 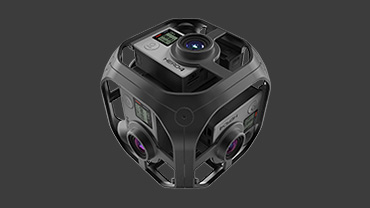 The GoPro Omni isn’t a 360 camera itself, it’s a housing that allows you to combine 6 GoPro cameras into a single unit in order to take 360 photos and videos. This results in some very beautiful 360 media, as you can imagine the power of 6 GoPro’s is quite substantial, however it’s also not the easiest system to set up and use.

While the Omni does allow you to click just one button and have all the cameras start shooting at the same time, you have to first set up the cameras correctly and ensure they all have enough battery and memory to keep running. GoPro is set to release a dedicated 360 camera at the end of 2017 to replace the Omni.