A very decent, cheap and portable 360 camera that attaches to your iPhone. A great way to start taking 360 photos ad videos without breaking the bank.

Designed to plug directly into an iPhone, this small but powerful device is an easy, inexpensive way to step into the word of 360 cameras. The Insta360 Nano is compatible withe the iPhone 6 and higher, it plugs straight into the phones lightning port where you can control the camera from the phones screen. The Insta360 can be used without a phone but you won’t be able to see the photos and videos. The insta360 takes great quality 360 photos and decent 360 video. It’s a sub $200 360 camera so you won’t be getting the same quality as a more expensive camera like the Samsung Gear 360, but overall it’s well worth its price.

The insta360 Nano is unique in the world of 360 cameras in that it is designed to plug into a phone rather than just connect to it wirelessly. The chassis is made of two distinct sections, a larger head where the lenses are located and a slim body that glides down the edge of your iPhone. Measuring 4.3 x 1.3 x 0.8 inches, the insta360 is small enough to fit in a pocket but should always be protected with the cloth bag it comes with.

An advantage of the cameras unique design is that it essentially becomes a part of your phone and there are no selfie sticks or lengthy transfers required. An unavoidable flaw is that you will need to hold your phone upside down to use the camera properly. You may find yourself tuning your phone up and down a lot when using this camera, a small nuisance but something most people will get used to quickly.

Although the camera is designed to be used with an iPhone, it is possible to use it without one. The camera has its own battery, memory card slot and USB port so you could feasibly use it without an iPhone, however you wouldn’t be able to see your images or videos until you connected it ti an iPhone or transferred the files to a computer.

You’ll find that when uploaded to 360 photo sharing sites or Facebook, the photos appear quite clear, however zooming in will quickly reveal blurriness and pixelation. The Insta360 certainly can’t produce as high quality 360 photos as the Gear 360, but it does a very decent job at a fraction of the cost.


This interior shot taken with a Insta360 reveals the relatively high quality images that the camera can produce indoors. Color contrasting could be better but overall this is a good performance and quality can only get better in an outdoor environment.

This outdoor photo example from the Insta360 demonstrates its full potential. The photo is bright and has almost no visible stitching lines, however some details are blurred due to the limited resolution.

The insta360 can shoot video at a resolution of 3040 x 1520, which is somewhere between 2K and 4K. Compared to other low cost 360 cameras the video produced by the Insta360 is quite good, however these are some obvious blurring issues due to the lower than 4K resolution. Remember 4K is the minimum resolution required for 360 video to look anywhere close to HD, so this will not be a HD experience

In this low-ish light video you can see the limits of the Insta360. The quality is average and with lots of movement some objects appear blurry, however it still holds up fairly well given the challenging environment.

In this day time example the video produced by the Insta360 Nano holds up much better. When viewed at the highest quality setting the image is bright and colourful, if not fully HD. Overall I would say the video is fine if you just want to make and share 360 videos with your friends on social media. If you want to create more professional looking 360 videos then you’ll have to spend a bit more money on a camera like the Samsung Gear 360.

As with most 360 camera, the Insta360 Nano comes with a dedicated app. You can launch the ap from the homescreen as normal, or it will launch automatically when you plug in the Insta360 to your iPhone. When you do either of these things the app will launch upside down, that’s because you need to turn your phone upside down to use the camera. 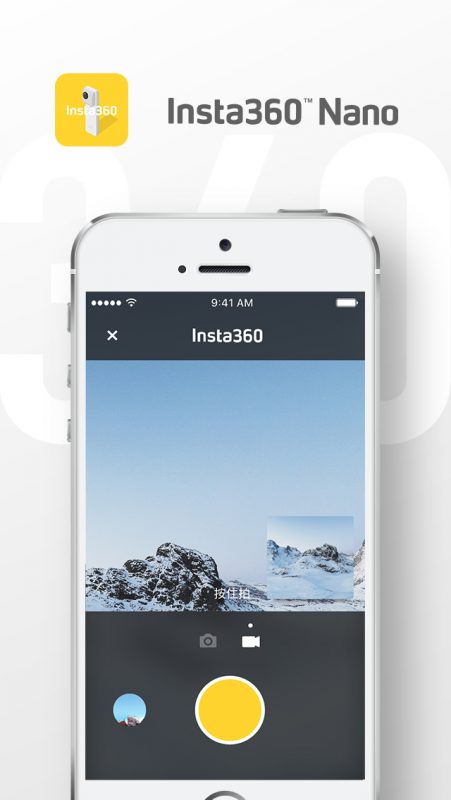 From the app you can control camera settings such as brightness, resolution, ISO. You can also view all your 360 photos and videos and apply filters to them.

The Insta360 Nano is a welcome addition to the crop of 360° camera to be released this year. Its low price point and good array of features should help to bring 360 camera into the mainstream. Photo quality is above average and beats out similarly prices cameras. Video is weaker but not a deal breaker and still looks great on social media. As one of the cheapest 360 camera to be released I’d say this is a pretty good bargain, especially considering you also get a VR viewer (similar to Google Cardboard) include with the camera! 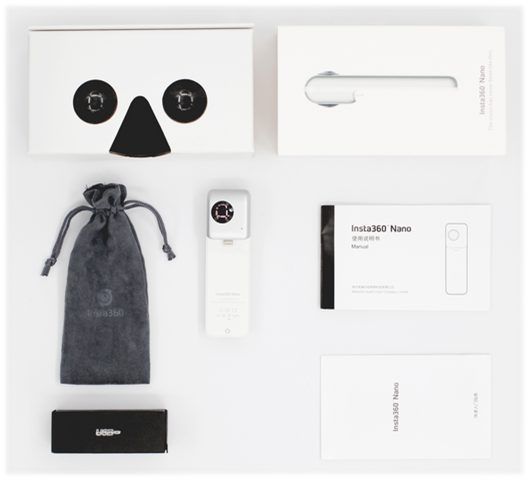 If you own an iPhone 6 or better and are looking to dabble in the world of 360 cameras, the Insta360 Nano couldn’t be more of a perfect fit. If you want a similar priced camera but don’t have an iPhone, the LG360 is for you.

SEE ALSO: Compare the Insta360 Nano specs to other 360 cameras