The LG 360 cam is one of the first 360 degree cameras to be released that is targeted at the average consumer. LG is hoping to establish a foothold in this new product category which looks set to explode along with the popularity of VR. What makes LG’s offering stand out from the crown is its low price; at $200 it undercuts all other 360 cameras released so far, but does this low price come with a cost in terms of video and image quality?

The LG 360 Cam is a great value 360 camera that is perfect for anyone who wants to use the camera for personal fun. The quality of the video is not high enough for any serious film work.

The LG 360 Cam is capable of filming 360 degree footage in 2K resolution. Whilst this is an improvement on some of its competitors, it still falls short of what is required for high definition 360 video. As explained in my What makes a good 360 degree camera post, 360 degree imagery requires a resolution of at least 4K to look anywhere close to the high definition we are used to seeing. The limited 2K capability of the LG 360 cam means that video ends up looking rather pixelated and low quality, whilst this may be acceptable for causal users who just want to experiment with the technology, anyone who wants to undertake some serious 360 film making may be disappointed with the quality of the video.

The LG 360 Cam shoots in full 360 degrees with 2 fish eye lens’s, it stitches the output from each lens together to create the 360 effect. The stitching is done reasonable well, however in most videos there is a noticeable ‘blind spot’ or distortion where the two images are stitched together, again this effect can be reduced with good lighting. Each video can be a maximum of 20 minutes long before the camera will stop automatically, if you want to take longer clips you need to manually start recording again and stitch the two clips together in post production.

The LG’s dual lens’s take 360 photos at a resolution of 16 megapixels, more than enough to produce clear images but much less than the Gear 360’s 30 megapixel photos. Never the less, the 360 photos produced by the camera are clear, colorful and bright. The quality is high enough that 360 images uploaded to facebook will still impress your friends.

The candy bar shape of the camera is very similar to the Ricoh Theta S and distinctive from the eyeball shape of the Samsung Gear 360. The camera is easy to handle, very small and light, can easily fit in a jacket pocket and is compatible with and standard sized tripods and selfie sticks. Controls are basic, with only a few buttons to control the shutter, power and wifi/bluetooth connectivity. Most of the controls are contained within the accompanying LG Friends Manager App which is available on Android Play store and the Apple App store. It’s worth noting that this camera is compatible with all phones, where as the Samsung Gear 360 is only compatible with the last 2 generations of Samsung handsets. 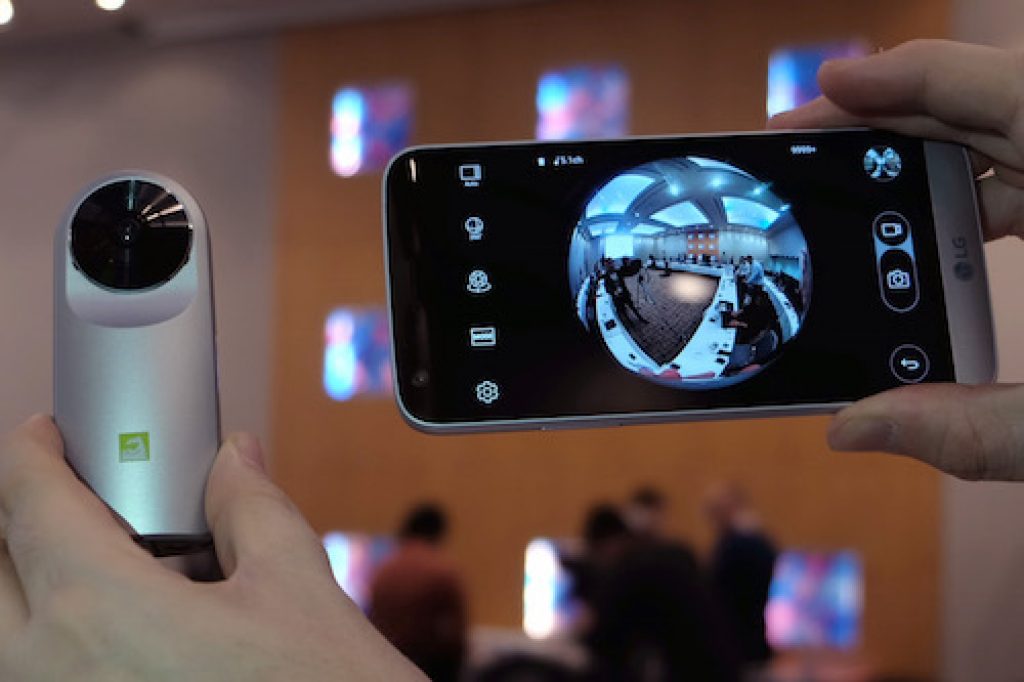 The App is an essential part of the camera software and is required to stitch the two images taken by the camera to create 360 degree images and videos. It has been reported that large files can take several hours to transfer and stitch using the phone app, which may prove troublesome for keen users. The App allows you to choose between camera modes, such as Night, as well as change settings for manual exposure, ISO (ranging from ISO 50 to ISO 2700), shutter speed (from 1/2 to 1/6000) and white balance.

The LG 360 Cam is a great value 360 camera for casual users who just want to try out this new technology as a hobby. The camera is well made, very easy to use and produces some very good 360 degree images. Video is where the camera lets itself down; even in the best lighting conditions the quality resembles video taken on a phone from 10 years ago.

If you are looking to experiment with 360 imagery, take some cool photo’s and maybe make a few home movies in the 360 degree format, then this excellent value camera is probably the best option for you right now.

Update: This camera is now an absolute bargain at just over $100. Offer available on Amazon

Artem Lazukin on Amazon said: This camera is just totally amazing as it is changing how I record videos now, especially parties since I’m able to see everyone at the same time.

Richard Easton from Expert Reviews said: The LG 360 Cam is a great introduction to spherical 360-degree video at a good price, and it works with any Android or iOS device

James Morris  from Trusted Reviews said: The LG 360 CAM ups the virtual-reality video quality a notch, and reduces the cost too.