The long awaited Vuze VR 360 camera is now finally available at B&H Photo after facing several months of delays. The Vuze VR camera is a 360 camera that can shoot full 360 video in 4K as well as 3D. The unique design features 8 HD lenses and 4 microphones that can record 3D audio.

The Vuze is designed and made by Humaneyes Technologies, a company dedicated to making content creation for VR as easy as possible.

Lets take a look at the specifications and price of the Vuze VR camera and think about where it sits in the growing 360 camera market. Can it compete with the many cheap cameras being released, or is it designed for more serious 360 video creators?

The Vuze is retailing for $799, which is considerably more than some budget 360 cameras like the Ricoh Theta S and LG 360 Cam. Is this price point justified? Unlike the aforementioned cheaper cameras, the Vuze is designed for people who want to get serious about creating excellent content for VR. It promises 4K resolution 360 video in each eye as well as the ability to shoot in 3D, something that no other 360 camera can replicate.

The key to the success of the Vuze is whether it can produce video at a high enough quality to look good on a VR headset, and therefore justify the extra cost. If it can then the Vuze could be the most cost effective way to start producing high quality 360 video for VR. Remember that many professional 360 cameras cost up to $40,000, so if the Vuze can even start to compete with those it will be considered a bargain.

Another sticking point for 360 video creation is editing. So far there are very few programmes that can edit 360 video, let alone do it well. A much welcome feature of the Vuze is that it comes packed with its very own software suite, known as Humaneyes VR Studio, which will handle post processing and editing. This software is said to simplify the 360 video creation process to a one-button and you’re done system, eliminating much of the waiting time associated with 360 video production. 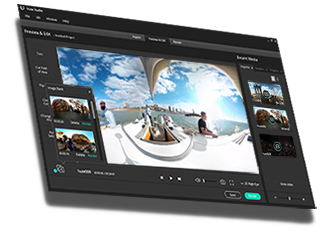 Once we get our hands on a Vuze VR Camera we will be sure to test it thoroughly and post the results here. Be sure to opt in to our 360 camera alerts to be the first to know when we do!