The VRDL360 is a new 360 camera that has just started an Indiegogo campaign. The camera has already been developed, but if you pledge $99 to the project you’ll receive a camera in September.

The VRDL is a candy-bar shaped camera that can shoot 3K video, and most excitingly, 7K 360 photos. The fact that this camera can take such high resolution photos could make the best consumer 360 camera for shooting 360 photos.

Let’s take a look at the full specifications of the VRDL360:

The specs of the VRDL are very decent compared to other 360 cameras recently released, and for only $99 it’s one of the best value cameras too. The camera is clearly designed to take excellent 360 photos; the two lenses combined can take 32 megapixel (7K) photos and you can control the ISO up to 1600 to deal with low light environments.

Most 360 cameras focus on video and leave photos as an afterthought, so there aren’t very many 360 cameras that can take truly impressive 360 photos. This camera may fill a gap in the market for people who are more interested in photography than video.

Let’s take a look at some example photos taken with the VRDL and see if the impressive specs actually lead to decent 360 photos.

Look at these photos from a pre-production model of the VRDL 360 but it still looks like it can indeed take amazing 360 photos! The detail on every photo is exemplary, you can really see the 32 megapixels doing their work. The outdoor photos are parasitically good and I especially like how vivid the colors are. I can hardly see a stitching line in any of the example photos which is a pleasant surprise.

The only issue I have is with the indoor image where there is a lot of overexposure on the windows and doors. Hopefully there can be some adjustments to the software to tackle this issue before they camera is fully released. 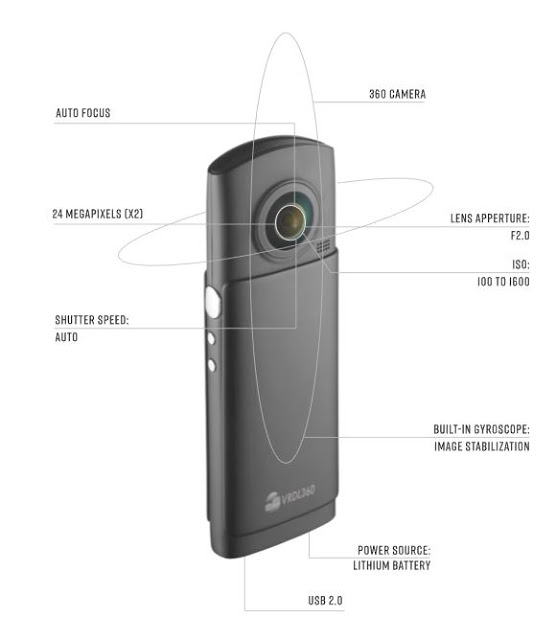 I don’t have any example videos yet from the VRDL yet. but we do know it can shoot 3K quality 360 video which is still pretty good considering the price of the camera. 4K would have been ideal, but I can forgive them considering the photos are so good.

You’ll also be able to live stream in 360 by connecting to YouTube and Facebook via the official app. 3K live stream is actually pretty decent as most 360 cameras struggle to get past 2K; this means you should be able to share your experiences in 360 without the resulting image being blurry and unwatchable.

I’m looking forward to testing out the VRDL and I’m happy that someone has developed a 360 camera that can take amazing photos. If you want a very good value 360 camera that specialises in 360 photos, then the VDLR is your best bet, espcially as it’s only $99 if you back it on Indiegogo this month.

You can also join the VRDL Facebook Group to discuss the camera with other users and enthusiasts.