I’ve spent a few days shooting with my new Garmin VIRB 360 and I’m just starting to get the hang of its many features. The VIRB 360 is a 5.7K 360 camera that was hotly anticipated to become the top 360 camera of the year so far, but how does it compare with the Samsung Gear 360 (the 2017 edition)? I went out and shot some photos and videos with both cameras in the same environment so I could compare them directly. We’ll take a look at the footage a bit later but first lets look a the specifications of both cameras side by side to see what we are dealing with.

Just by looking at those specifications, you would conclude that the VIRB 360 is superior to the Gear 360 in almost every way. The maximum video resolution is much higher in the VIRB, which can shoot at 5.7K. Photo resolution is almost identical but still slightly higher in the VIRB, not to mention the myriad of sensors extra features such as being waterproof to 10m. Never the less, there are a few catches that the spec sheet doesn’t fully reveal.

While the VIRB can shoot 360 video at 5.7K (a much higher resolution than almost all other 360 cameras), it cannot stitch the videos together at this resolution. What this means is that when you shoot at 5.7K on the VIRB 360 you will output two separate video files which you much stitch together yourself using software. This is a time consuming process and may be beyond what many people will tolerate. Thankfully the VIRB 360 can stitch 360 video at 4K resolution so you’ll be able to use your vieo straight away.

For the purposes of this comparison I’ll be comparing the video of the Samsung Gear 360 against the video form the VIRB 360 at 4K resolution. Like I said, the VIRB can shoot at 5.7K which will almost certainly look better, but most casual users won’t want to go through the process of manual stitching, so I’m keeping this a 4K comparison. Photo’s are stitched automatically so no issues there!

I shot the above video using both the Garmin VIRB 360 and the Samsung Gear 360 at the same time and using the same tripod. Both videos were shot at 4K resolution, but you can still see a significant difference between the footage. The VIRB seems to produce much sharper footage and the colors are most accurate, still, the Gear 360 holds its own and still looks fairly decent. The audio is another factor, you may not be able to hear it here but the VIRB is able to record 360 audio, where as the Gear 360 has notoriously poor audio quality. 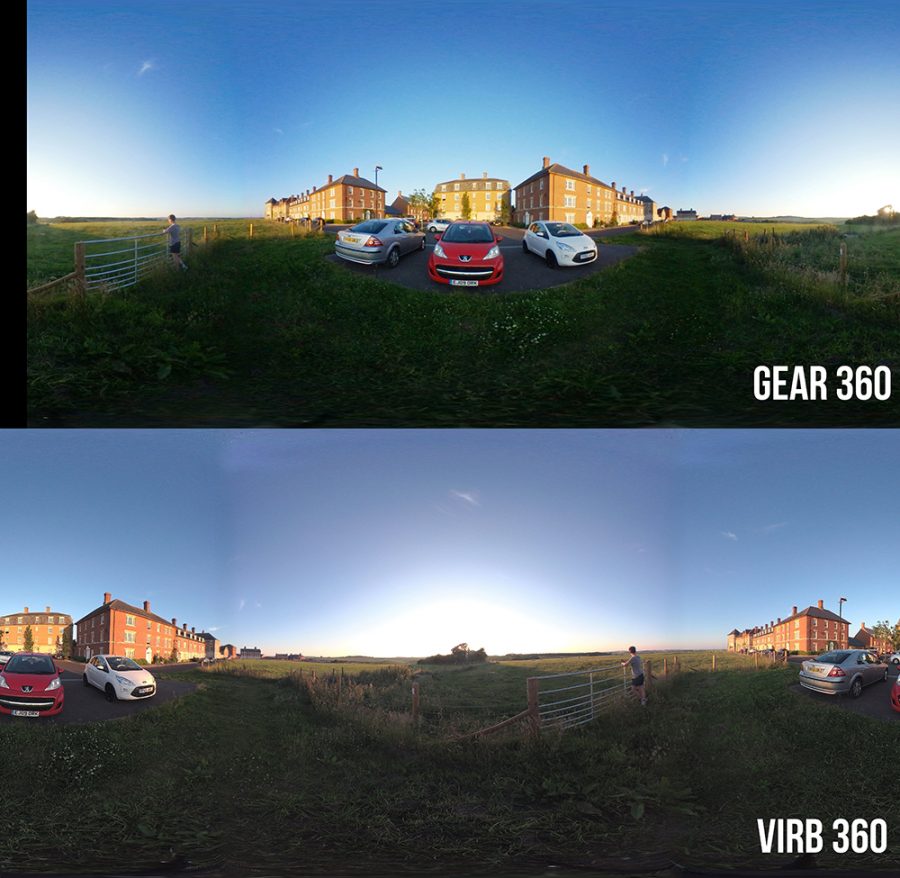 These photos have been down-scaled so they fit on this website, it reality they would both be around 5500 x 2700, but as you can see the VIRB produces slightly larger images. As for the image quality I think the VIRB wins again thanks to a sharper image and more accurate coloring. The colors in the Gear 360 shot looks over saturated compared to the VIRB and the details are much less apparent. While the VIRB 360 photo looks great, at 15 megapixels it’s still a rather small image for 360 photos. Considering the 2016 Gear 360 can shoot 30 megapixel 360 photos I would have expected the newer, and much more expensive, VIRB 360 to be able to at least equal it.

The VIRB wins this comparison as far as I’m concerned, but that’s hardly a surprise considering that it’s nearly $600 more expensive, but is it worth the extra expense? The quality of the video is significantly better and you’ll be able to shoot at the even higher resolution of 5.7K, but $600 is a lot of money and the photo quality isn’t much greater. The VIRB also has several other features to consider though, such as half a dozen sensors, augmented reality overlays and water resistance to 10m. To summarise, the VIRB 360 certainly produces better quality 360 video than the Samsung Gear 360, but that’s not a good enough reason to get it. The VIRB is primarily an action cam so you should probably only consider buying it if you are going to use every feature.

I’ll be creating a full review of the Garmin VIRB 360 once I’ve tested out all the features, in the meantime you can see all the videos I shoot with the VIRB on my YouTube channel. If you can’t wait to get your own VIRB 360 you can do so now on Amazon!