Are you looking for the best 360 camera for photography? Most reviews focus on the video capabilities of 360 camera, but shooting immersive photos is a useful and creative tool that should be given equal attention. In this post we will focus entirely on 360 cameras that are awesome at shooting 360 degree photos.

Whether you are looking for a professional option or something a bit cheaper there’s a perfect 360 camera for you on this list.

360 Image Before It’s Been Stitched

What You Should Look For

When choosing a 360 camera specifically for photography you need to keep an eye out for some key features.

Sensor Size: This is largely what will determine how well a 360 camera can shoot photos. The larger the sensors in its lenses the better; unfortunately most consumer 360 cameras have small lenses, but there are a few exceptions

DNG RAW: If you want the best quality images then shooting in RAW is a must. RAW files keep all the data and allow you to get finer detail and more accurate light, massively improving the quality of your images. You will need a program like Adobe Photoshop or Lightroom to be able to edit these files and know how to work with them.

Auto HDR: If you don’t own or don’t want to invest in editing software then a good alternative is auto HDR, a mode which stacks several images on top of each other and produces a final image with improved dynamic rage.

Stitching Accuracy : A unique issue for 360 cameras is the accuracy of its stitching algorithms. 360 images are made when two or more lenses shoot a wide angle image, both of which are stitched together to create the final 360 image. This process can sometimes leave a line where the two images meet; this will be different for each camera and some are better than others.

The Ricoh Theta Z1 is the best 360 camera for photos, in fact it as designed for this very purpose. The Z1 is capable of shooting awesome quality 360 photos thanks to its large 1 inch lenses, larger than any other consumer 360 camera. These lenses allow it to capture more light and detail and make the Z1 the camera of choice for VR tours.

The Z1 can also shoot DNG RAW photos which allow you to get the absolute best quality out of every image. The Z1 is perfect for professional or semi-professional use such as real estate virtual tours of construction site tours.

The Theta Z1 is the only 360 camera with variable aperture which is a feature usually reserved for DSLR cameras and allows the camera to shoot in more varied lighting conditions. I’ve also found the Z1 to be very accurate at stitching 360 images and the Lightroom Plugin allows you to manually fix stitching errors quickly. 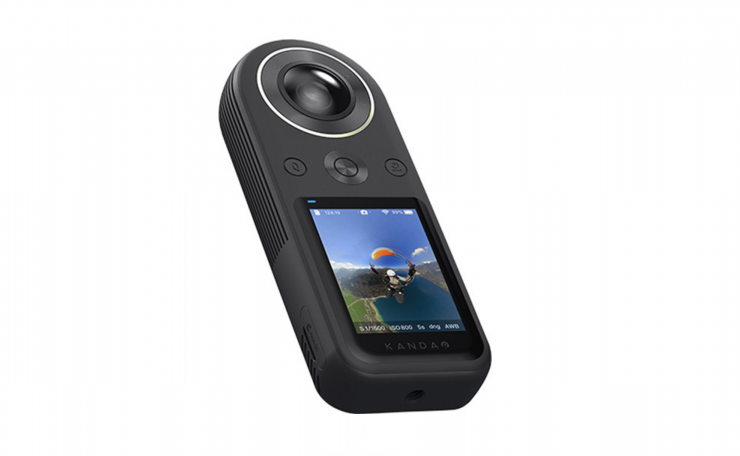 The headline feature of the QooCam is its 8K video resolution, which is an extremely impressive innovation for a consumer camera. While the QooCam leads the pack in terms of 360 video it’s also no slouch when it comes to shooting photos.

The QooCam’s DNG 8 mode stacks 8 individual images on top of each other to create a super high dynamic range image that looks great in practically all lighting conditions. Compared to the Z1 it’s a close call. What makes the QooCam the slightly worse option is its smaller lenses and lack of aperture options.

If you are a looking for a 360 camera that’s great at shooting video as well as photos then the QooCam 8K is definitely worth considering.

Buy from Kandao back to menu ↑ If you are looking for a more casual option then the Insta360 One R could be the perfect camera for you. With a more reasonable price and some powerful features, the One R is perfect for those who want to shoot 360 photos for social media.

The One R can shoot 18 megapixel 360 images, features an auto HDR mode and can shoot DNG RAW photos for those who want extra control during post production. The One R also features a “night mode” which automatically combines several images together to get great quality photos even in low light conditions.

The One R’s main features are video based but it’s a pretty capable camera for shooting photos and with some decent editing could even be good enough for VR tours.

Released a few years ago the GoPro Fusion was way ahead of its time. Feature excellent color and lens technology the Fusion brought a quality never before seen in consumer 360 cameras. Newer devices have caught up but the Fusion still remains relevant and, most importantly, cheap!

When it was first released the Fusion was pretty pricey, but now you can find in for as low as $250/£230, an absolute bargain for what the camera can do!

The Fusion can shoot 18 megapixel photos and shoot in DNG RAW mode. As discussed previously shooting in RAW is the best way to get the most out of your 360 images. The colors and details that the Fusion can capture are way beyond other cameras at a similar price.