The QooCam 8K is the first ever consumer 8K 360 camera; this is a huge upgrade from previous 360 cameras which so far have only managed 5.7K resolution at most. While resolution isn’t everything, such a large image size results in very sharp and clear video. The QooCam also features  1/1.7“ sensors which is around 50% larger than the lenses used in most other 360 cameras, this allows the QooCam 8K to work well in low light conditions. Let’s take a look at the full technical specifications of what looks set to be the most feature packed 360 camera ever!

High Resolution Video: At 8K the QooCam 8K features the highest resolution video of any 360 camera by quite some margin.

4K Reframed Video: Most people use 360 cameras to create re-framed video but have been limited to 1080p. The QooCam 8K will allow for 4K reframed video at truly high definition.

High Quality Photos: The camera has the ability to shoot high resolution 360 photos at 7680 x 3840 which is among the highest of any 360 camera out right now. The QooCam will also feature 12-Bit DNG RAW as a photo option, allowing you to capture a huge amount of image data for post processing.

3.5mm Audio Jack: While the camera itself doesn’t feature stellar audio hardware it does allow for external microphones to be attached via a standard audio jack.

Large Battery: The 3500 mAh battery is among the largest of any 360 camera, however it will need all this power for the arduous process of shooting 8K video.

Built in Memory: Enjoy up to 64GB of internal memory as well as a microSD card slot. When shooting 8K video you’ll need all the memory you can get!

The defining feature of the new QooCam is of course 8K video resolution. Various tech companies have been vying for the highest resolution camera for the past few years. First 4K was considered the top feature, then 5.7K cameras came along and now Kandao has become the first to introduce an 8K 360 camera for consumers. This is a really huge resolution and should go a long way to fixing the relatively low quality we find when shooting in 360.

Up until now if you wanted 8K 360 video you needed to invest thousands in a pro level camera. I didn’t think an 8K camera was on the horizon for the consumer market for at least a few yeas, but here it is! What’s also astounding in the extremely high bit rate than Kandao claims the QooCam 8K can shoot in, up to 200mbps! This should result in very sharp and crisp looking video but will also take up a huge amount of memory space. It’s for this reason that the QooCam 8K features internal memory of 64GB as well as  a microSD card slot to expand that memory.

The QooCam 8K can also shoot 4K video at 120fps which is a higher frame rate than any other 4K 360 camera. This is actually a more exciting feature for me personally as I have always thought that 360 video and slow motion make an excellent combination. Previous cameras have only been able to shoot high frame rate 360 video at low resolutions but the QooCam may be able to deliver decide quality slow motion.

This is the most impressive video shot with the QooCam 8K that I’ve seen. It features 10 bit 8K hyperlapse video re-framed and the result is pretty amazing. The quality of the video is beyond any other 360 camera under $1000 and certainly better than all the consumer cameras out now. Notice the lack of pixelization, vibrant colors and details even in the distance. Also notice the maximum video resolution of this re-framed video is 4K, much larger than the max 1080p possible with cameras like the GoPro Max and Insta360 One X.

The QooCam 8K is the first consumer 360 camera to shoot 10-bit video which allows for greater control of color and exposure in post production. 10-Bit video, when edited correctly, can result in much higher quality video – just what users of 360 cameras have been asking for. To put it into even greater perspective, the QooCam 8K will be able to capture 1 billion possible colors, 64 times more than the 16.7 million colors than 8-bit video used by other consumer 360 cameras.

This short video shot at the maximum 8K shows the potential of the QooCam 8K as a VR camera, The 8K video (if you can load it) looks crisp and detailed, even around the edges where 360 video scan sometimes appear blurry. The quality of the video is on par with some professional 360 cameras which cost thousands of dollars. The colors also appear natural and not washed out. There does appear to be some stitching artefacts, particularly when the man holding the child walks through the stitching line, but this could be improved with software updates. This video shows how the QooCam 8K is likely to be to go to 360 camera for creating 360 virtual tours.

This night time footage shows that the QooCam 8K can work well in difficult lighting conditions and again it performs better than all other consumer 360 cameras. The lack of noise in the shadows and glare in the lighter areas makes for a really stunning video. The excellent performance in low light is no doubt due to the larger sensors in the dual lenses.

If you want to use your 360 camera as an action camera, stabilization is extremely important. Thankfully many companies have developed software which can completely stabilise 360 video even in the most extreme circumstances. The QooCam 8K will feature such stabilization as demonstrated in their launch video.

While people tend to focus on resolution to determine how good a cameras video will look it’s actually the size and quality of the image sensors that makes the most difference. The QooCam 8K seems to beat the competition in this department too, featuring two 1/1.7“ Sensors which are over 50% larger than those found in most other consumer 360 cameras. Only the Ricoh Theta Z1 has a larger sensor but this is mostly a photography camera. The larger sensors will allow for greater dynamic range accurate color and improved performance in low light conditions. The QooCam will be hard to beat when it comes to video quality.

The previous Kandao camera, the first QooCam, didn’t have a huge amount going for it. One thing it could do better than many other 360 cameras was shoot RAW DNG photos, often with excellent results. The QooCam 8K retains this feature and allows you to shoot the maximum quality photos possible.

The QooCam 8K is accompanied by a desktop editing software for Mac and Windows as well as an App for both iOS and Android. The desktop software allows you to batch process your video and photo files and render them at the highest quality. The new QooCam app lets you reframe your 360 files into 1080p flat videos as well as change speed, add filters and export in 360. 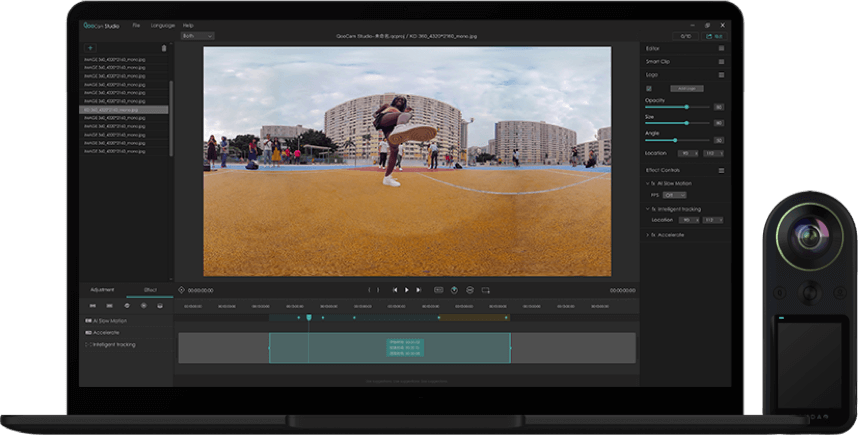 Available from Kandao back to menu ↑
SaveSavedRemoved 0