Prior to the release of the Garmin VIRB 360 I was very enthusiastic about it. It certainly had the specs to beat any of the current competition; 5.7K resolution, water proof to 10 metres, impressive stabilization features, augmented reality overlay, the Garmin has pretty much everything you could ask for in a 360 camera.

So I’ve had the VIRB for over a week now, and let’s just say it’s not gone quite to plan. While I’ve managed to take some impressive 360 video, I’ve encountered several bugs and issues that have frustrated by experience with the VIRB 360.

Update: Garmin have dealt with some of the issues I listed below. See my VIRB 360 Hands On Review for a full overview of this camera

Garmin VIRB 360
A series of updates has dramatically improved the features on this 5.7K camera. One of the best for 360 video.
$749
Check Amazon 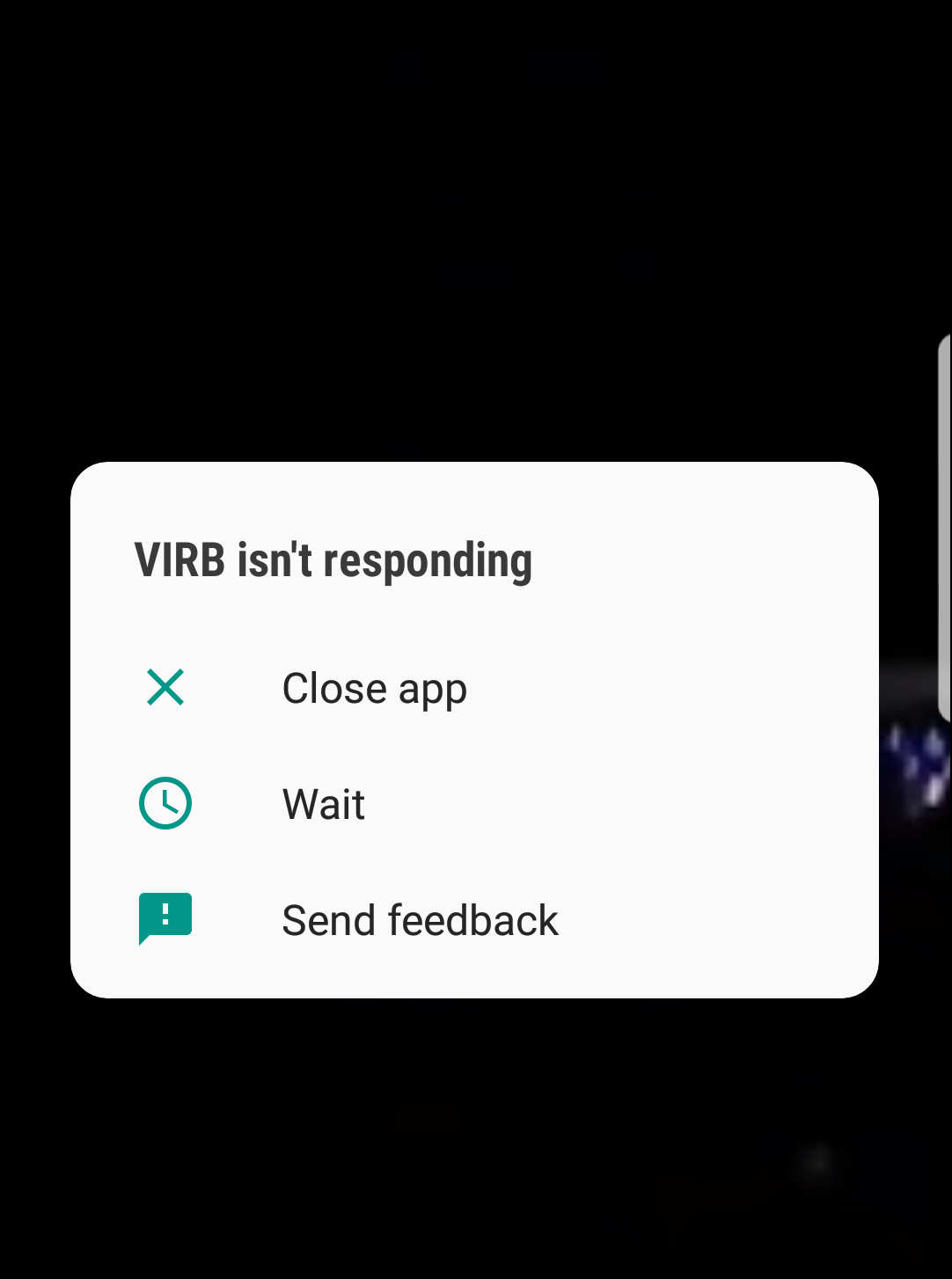 An all too common occurrence

The biggest issue I’ve had with the VIRB is using the official app to connect my phone to the camera and use to remotely. The connection is laggy and sometimes doe not work at all. I’ve had several instances where the app has repeatedly told me to manually “forget” the wifi network used and reconnect, bit after doing so I simply get the same message again. even when the app does work, it does so slowly and inefficiently. Changing settings sometimes causes the connection to fail and shooting video causes the screen to freeze. Even when everything is working, there is still an issues with the preview image on your phone, it’s displayed in a ludicrously low quality and lags behind reality by about 5 seconds, something I’ve not seen on any other 360 camera app.

This app is a major frustration and is almost unusable, but thankfully apps can be updated, I just hope Garmin does so quickly because these types of issues should not be occurring after release.

Update: After 6 months the app has received several updates and is much more stable now, but it’s not the best app out there. At least it works now!

I never expected the VIRB 360 to be a great 360 photo camera, but for a $800 device, the quality is pretty poor. The Samsung Gear 360 at just over $200 can take better 360 photos than the VIRB. The two lenses on the VIRB can only shoot 8mp images each, this is very low for 360 images which need a much higher megapixel count to look sharp. In some situations the photos can look pretty good, outside and with good lighting for example, but in any challenging environment 360 photos look dull and pixelated.

This is probably the best quality 360 photo I’ve taken with the VIRB 360 and it still lacks a certain sharpness that I’ve come to expect from more expensive 360 cameras. There isn’t much that can be done about the low quality photos as it stems down to a hardware limitation, so if you are looking for a 360 camera to take photos I’d avoid the VIRB (videos are very good though!).

Update: Firmware updates have lead to an upgrading of the photo quality, particularly in low light conditions. The VIRB 360 is still an average camera for photography.

Since I’ve had my camera I’ve received 2 major firmware updates from Garmin which have fixed all the hardware issues I’ve had, but upon first receiving the camera a few of the manual buttons seemed to not be functioning. There is a manual record switch on the side of the camera that lets you start recording video without connecting to the app and this was not working for me until I updated the firmware. I missed out on a pretty cool filming opportunity because the app wouldn’t connect and the manual side button was not working, which is kinda frustrating. Like I said these issues have now been fixed with a firmware update, so if you get the camera make sure to update immediately.

Update: New firmware seems to have fixed these issues. I now don’t get any more hardware issues.

The Garmin can shoot 5.7K 360 video, higher than almost all other 360 cameras under $2000. This is one of its headline features and yet I question whether it’s even worth the bother shooting at this quality. The VIRB cannot automatically stitch 5.7K 360 video due to lack of processing power, so when you shoot a this resolution you get two flat images that you must stitch yourself. Garmin provides no program, app or software to allow you to do this and offers no assistance in informing you of the best way to stitch this video.

Many people will not be familiar with stitching 360 video (I certainly was not until recently) and doing so requires some pretty advanced software. Even if you do work out how to do it, there are very few places where 5.7K video can up uploaded. YouTube doesn’t have this option and will downscale the video and Facebook doesn’t even accept 4K yet. Manually downscaling 5.7K to 4K is a good compromise and will result in great looking video, but I haven’t quite worked out how to do this yet. My point is that Garmin should be providing software that does this simply and easily, this camera is aimed at consumers after all, not video professionals.

Update: Garmin released at update to their VIRB Edit software that can now stitching 5.7K video automatically. This is probably the most important update for the VIRB 360 and dramatically improves its usability.

The advertised battery life of the VIRB 360 is about 1 hour of continuous recording which isn’t great to begin with, but to be fair most 360 cameras have a limited battery life. In reality the battery life of the VIRB may even be worse than this, especially when connected via wifi to the app. The battery could maybe last you a day if you made sure to turn it off as soon as you finish recording and only use the wifi connection sparingly. Spare batteries will become available to buy soon and the camera can be charged with a power bank, but this is extra cost and hassle. Sometimes software updates can optimise battery life, but I think this is always going to be an issue with this camera.

Update: The battery life is still poor, but if you disconnect the camera from the app the battery will last twice as long. This is also becoming a common issue among all 360 cameras.

So that was a pretty scathing analysis of the VIRB 360, but I would like to point out that there are a lot of good things about this camera which I’ll also be discussing soon. I don’t like being a beta tester and with the state of the software upon release that’s kinda of what I feel like I’m doing. I almost wouldn’t mind if this was a low cost, crowd funded camera that was upfront about its issues, but Garmin is a serious action cam manufacturer that should know better than to release an unfinished product.

Mercifully most of the problems can be fixed with software updates, in fact just fixing the app will make the whole camera twice as good in my opinion. If you’ve finished reading this and none of the issues I’ve discussed are a deal breaker for you, then you should certainly give the camera a try because it’s one of the most innovative 360 cameras ever in my opinion.

Update: I’m writing this after 4 months or so and as you can see, there have been quite a few updates that have fixed many of the issues I discussed. Out of all the 360 cameras I own (over 10), the VIRB 360 is probably the best for video and I would now happily recommend it.

The VIRB has also recently received a price cut on Amazon. Click here to see if it’s available.

How To Start A Virtual Tour Business – Full Guide