The Insta360 One X is the second generation camera from this growing tech company and the sequel to 2017’s very popular Insta360 One camera. The new camera retains the same goals as the original, to allow people to shoot 360 VR video and create super stabilized “normal” video, but with several key upgrades. If you are thinking about upgrading, or if you are not sure if the Insta360 One X is worth the extra cash, then read on as I take you through a detailed comparison between the two 360 cameras. 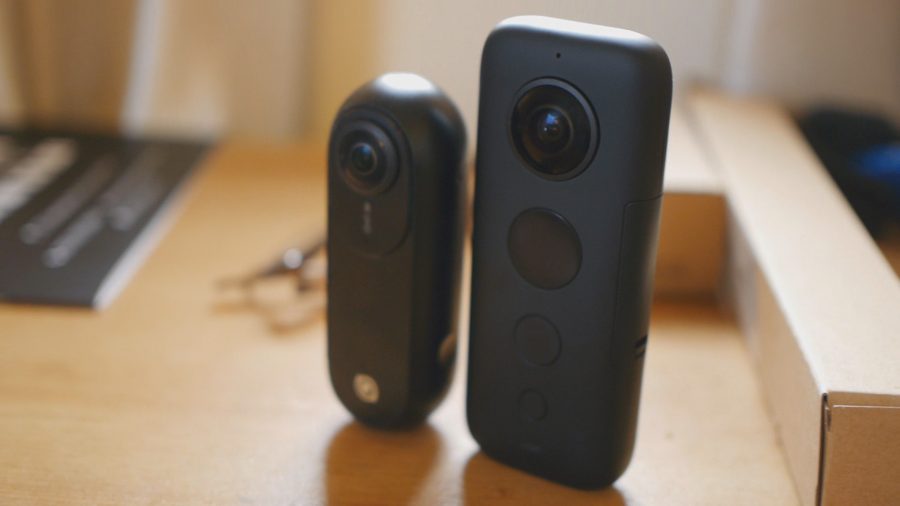 One of the most obvious differences between the two cameras is what they look like. The One X is larger and heavier than its predecessor and features an additional LCD screen. The One X is pretty much entirely plastic whereas the One is a mix of plastic and glass. The One X is certainly an improvement but neither camera uses the most premium materials.

The LCD screen and extra manual controls are the biggest improvement in terms of design and it allows you quickly change any camera setting without connecting to an app. The original Insta360 One is much harder to control and you cannot alter any settings manually. The new Insta360 also features a removable battery, this means you can buy spares and have them ready in case you run out of juice.

You’ll want to play close attention to this section, as video is by far the most important feature of both cameras. The Insta360 One can shoot 360 video at 4K resolution whereas the One X can shoot 5.7K. This is a significant difference and the end result is much sharper video from the One X. Not only is the resolution higher with the One X, but the quality of the image is significantly better. The one X can shoot video with better dynamic range, lighting and color balance. I’m unsure if Insta360 altered the optics in the latest device, but whatever they have done has worked!

Bit rate is another important factor when looking at video quality and it’s no surprise that the One X has the One beaten here too. I’ve fond the One X captures video at around 70Mbps whereas the original one is limited to 40Mbps.

So what does all this mean? If you were looking to shoot 360 video to view in a VR headset, the One X is a MUCH better camera for doing so. If you are more interested in the freecapture/overcapture feature that both cameras offer, again the higher resolution from the One X means your final cropped video will look much sharper and pretty close to HD.

Get Insta360 One X with Free Selfie Stick

A big upgrade to the One X is the frame rate options that allow you to shoot in slow motion. You can choose to shoot in 4K at 50fps or 3K at 100fps and doing so allows you to slow down sections of your video. You can even combine fast motion (hyperlapse) and slow motion to create awesome looking videos.

The One X is simply a much better camera for video capture in every way. If you budget can stretch to it, then I seriously suggest opting for the One X if you at all serious about capturing video with a 360 camera.

While the One X knocked it out of the park when it came to video, photography is not as clear cut. The specs actually suggest that the One X has seen a downgrade compared to the One. The One X can shoot photos at 18mp, whereas the one can shoot 24mp images.

While its true that more pixels tends to mean a better looking image, that’s not always the case. I’ve found that the One X actually shoots far more attractive looking 360 images despite being a lower resolution. The reason for this is down the improved optics in the One X which capture light and color better than the Insta360 One ever could. 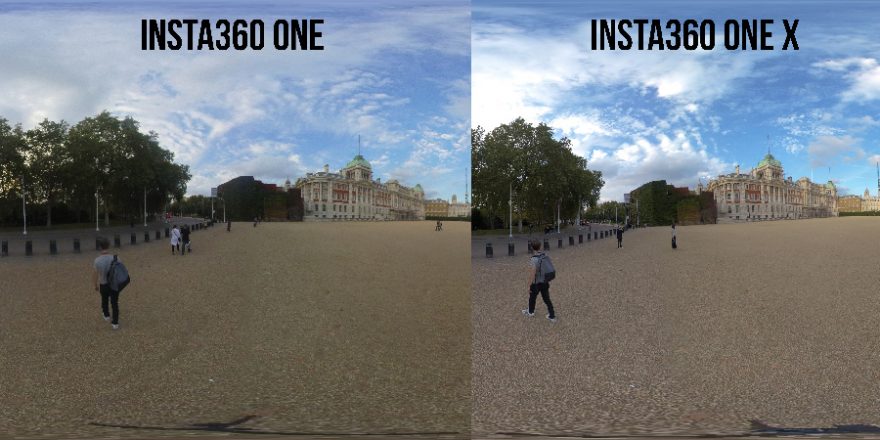 You can see in the image above, where I’ve combined one two images taken with both cameras in the same location, the difference in quality between the two. The details of the buildings in the distance are much clearer in the One X image and the photo looks generally more appealing.

The reduction in resolution really doesn’t matter too much anyway, as the vast majority of 360 images are viewed on a small phone screen where resolution isn’t such a big consideration. So despite being an apparent downgrade, in fact the One X is a much better camera for 360 photography than the One.

HDR Photo/Video: The One X features a HDR mode for both photo and video, improving the dynamic range of both.

Livestream: Both cameras can wirelessly livestream in 4K, however the improved quality of the video from the One X means that the stream is likely to look superior from this device.

RAW Mode: Both cameras can shoot photos in a RAW file format allowing you to edit and color correct without loss of quality, however the One X can also shoot RAW video files in the LOG format.

I think it’s pretty clear that the One X is a superior 360 camera in almost every way, which isn’t much of a surprise. But is it really worth upgrading? I think it is, because the quality of both the video and images coming out of the One X is just so much better. Both cameras retain the same epic stabilization, but combining this with 5.7K video makes for a much better product.

The One X is more expensive than the One, but not hugely so. Given the number of extra features you get I think choosing the One X over its older sibling is a no-brainer!

You can buy the Insta360 One X from the Insta360 website. If you use this link then you’ll also receive a free invisible selfie stick that’s specially designed to work with the One X