GoPro Max vs GoPro Hero 8: Which should you buy?

If you are reading this post then you may be struggling to decide between the GoPro Max and GoPro Hero 8. The Hero 8 is the latest in a long line of successful action cameras that made GoPro the household name it is today whereas the Max is a second generation 360 camera that is still somewhat of a new venture for GoPro.

Both of these cameras are excellent at what they do, top of their respective categories in fact, but they have some major differences. Both can be used as action cameras and both are good for vlogging, but each has key strengths and weaknesses that need to be considered.

Shooting video is what both of these cameras are designed for. Each of these cameras uses 12 megapixel sensors with similar lens technology, the main difference being that the Max has two lenses where as the Hero 8 has one.

The GoPro Max has two video modes; 360 mode and Hero Mode. 360 mode is shot at 5.7K resolution and allows you to capture the whole 360 degree field of view (that’s everywhere at once). 360 video can be viewed in a VR headset or it can be “re-framed” into a normal video, allowing you to choose where the camera is pointing after you’ve finished shooting.

While 5.7K sounds like super high resolution the end result isn’t as sharp as you might expect. That 5.7K has to fill a much larger space than a normal video, so the end result looks more like 1080p. 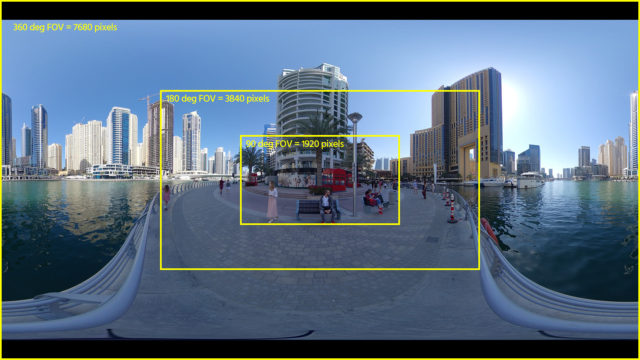 So don’t expect super high quality video from the GoPro Max in 360 mode. Having said that, the Max is currently the best 360 camera for video right now and I’ve been very impressed with what it can do.

The advantage of 360 video isn’t the high quality but the fact you can capture everything at once. This allows you to pick and choose what the camera focuses on after you. This is not only perfect for vlogging but also for action shots. Imagine not having to ever point the camera or never missing an awesome moment.

Another great thing about 360 video is that it enables amazing stabilization thanks to the number of pixels involved. GoPro’s Hypersmooth stabilization has been made famous on the Hero range of cameras however it actually works far better on the Max.

The Max can shoot near perfectly stabilized video in even the most challenging of conditions. It’s perfect for skiing, biking, running, BMX, climbing or any kind of action shot.

In essence when shooting in 360 mode you sacrifice quality for a much greater edition potential and amazing stabilization. One of the unique selling points of the Max is that it’s two cameras in one. Not only can the Max shoot in 360 mode but it can also use one of its two lenses to shoot in Hero mode, which is essentially like shooting with a normal GoPro Hero camera.

Hero Mode allows you to shoot standard format video when shooting 360 isn’t necessary. Hero Mode is limited to 1440p resolution so it can’t match up to the sharpness that 4K video brings to the Hero 8.

When shooting in Hero Mode you can choose either lens to record with and thanks to the Max’s large screen you can record yourself while also seeing what your recording; this makes Hero Mode perfect for vlogging.

The Hero 8 is GoPro’s newest action camera and features the latest sensor and color technology, two things that GoPro is well known for. The Hero 8 can shoot 4K video with stunning quality, surpassing pretty much every other action camera on the market. The Hero 8 also has a range of slow motion modes, up to 240fps at 1080p.

Perhaps most impressive is the ability to shoot 120fps video at 4K resolution; one of very few cameras at this size and price range that can do so.

Hypersmooth stabilization is also included in in the Hero 8, however it’t not quite as impressive as the Max.

For standard video the Hero 8 is an ideal choice thanks to its tiny size and superior quality video but it’s harder to get creative. 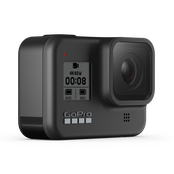 Buy Now
back to menu ↑

GoPro redesigned the Max to be smaller and easier to use compared to the Fusion, their first generation 360 camera. The max more closely resembles a standard GoPro camera and is firmly aimed at mainstream users.

The Max features a large touch screen as well as a manual power and shutter button. It’s perfectly possible to control every aspect of the Max from the very responsive screen. You’ll also find 4 separate microphones on the Max which are capable of recording very high quality audio.

The Hero 8 is much smaller than the Max but also features a handy touch screen for full manual control. A change from the previous version is that the hero 8 doesn’t require a bracket for many of GoPro’s numerous accessories thanks to the inclusion of the attachment point on the body itself. 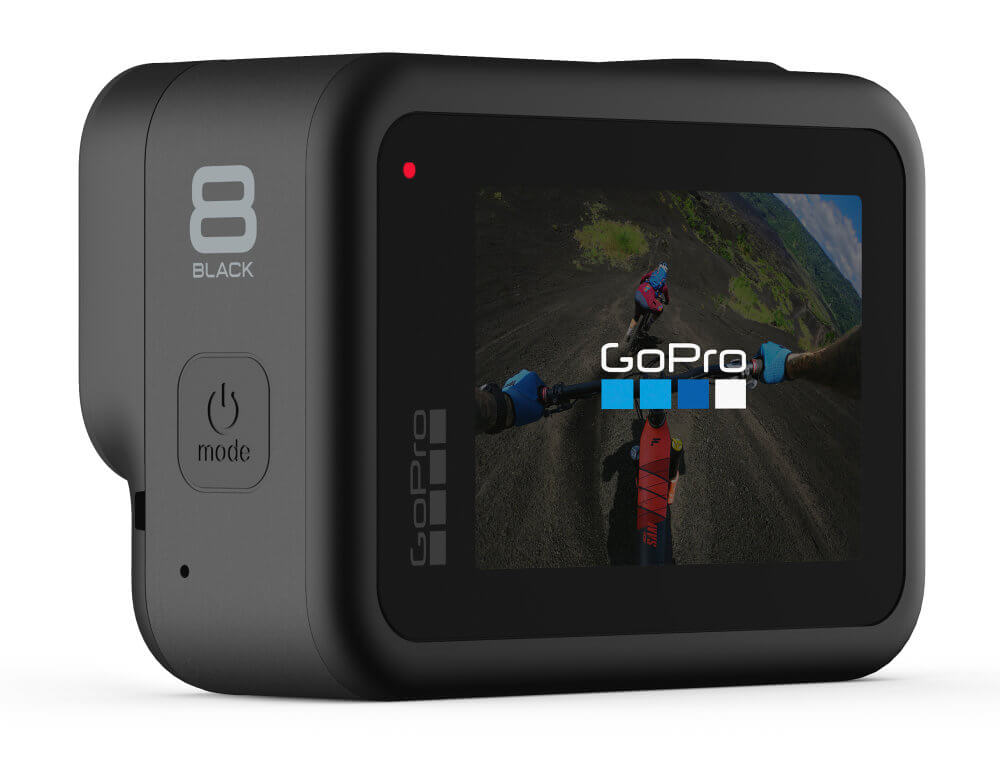 Speaking of accessories GoPro has developed its most impressive range yet which can significantly improve the Hero 8’s functionality. LED lights and microphone mod turn the camera into a powerful film making device, albeit at an extra cost. 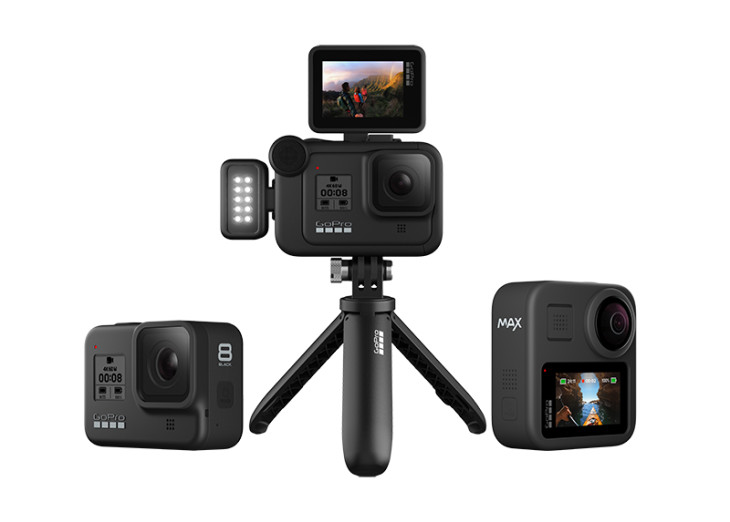 Both cameras are fully waterproof without any extra case and they both feature the rugged build quality and shock proof design. Be aware that the two lenses protruding out of the Max are particularly vulnerable; thankfully GoPro provides lens protectors in the box.

GoPro’s have always been video first and photos second and nether of these cameras are going to match up to a dedicated photography camera. That’s not to say you can’t get some decent quality images from these cameras.

The highest resolution images possible with the Hero 8 is 4000 by 3000 pixels, an aspect ratio of 4:3. This isn’t huge, but more than enough for sharing on social media and many flagship phones shoot at a similar resolution.

There are several photo modes available on the Hero 8 including:

Superphoto uses the GoPro’s processing power to automatically analyse a scene and improve color and dynamic range, a subtle but effective way of improving the quality of an image. HDR mode is a more obvious effect which combines three exposures to create a very dynamic image even in low light conditions.

While these two modes are great for improving the quality of your images, the down side is that RAW mode is disabled. In many cases shooting in normal mode with RAW enabled will result in better quality if you are able to edit in Lightroom or Photoshop.

The GoPro Max has a different set of capabilities. The Max can shoot both 360 and standard photos using either one or both lenses. Photo quality is average and it doesn’t feature a RAW mode, which is actually a step back from the Fusion (RAW mode will likely be introduced in a future software update).

The one unique photo feature of the Max is PowerPano. This modes allows the camera to shoot error free full panoramas in a single shot, as opposed to the awkward way panoramas work on phones. Other than this the photography capabilities of the Max are nothing to shout home about.

Verdict – Which Should You Buy?

The battle between the GoPro Max and Hero 8 is a friendly one as they are part of the same family. Still, many will be wondering which is best for them. If you want the highest quality video and photos possible then the Hero 8 is for you. It’s amazing that you can get such high quality video in such a small package and it’s a significant boost

If you want to get more creative, shoot some unique, cinematic shots and are willing to learn how to edit 360 video then the GoPro Max is your choice. Personally I’d choose the Max for its flexibility, stabilization and the fact that it’s two cameras in one. At only $100 more than the Hero 8 I think it’s pretty reasonably priced too.

How To Start A Virtual Tour Business - Full Guide