GoPro Fusion vs Insta360 One: Which should you buy?

The Insta360 One (check price) and GoPro Fusion (check price) are two 360 cameras that have both proven popular among people who are interested in immersive media; that’s just about where the similarities end. The Fusion and Insta360 are very different beasts, with their own strengths and drawbacks. I’ve owned both cameras and I’m confident that I can help you choose between them. In this article I’ll be showing you photos and videos shot with both cameras as well an analyzing the hardware and software; once you’ve finished you should have a pretty good idea which is the better 360 camera for you.

GoPro Fusion vs Insta360 One

The two cameras look very different and have a lot of variation in hardware. Like most consumer 360 cameras both the Fusion and Insta360 feature two lenses which work together to create 360 media, however the similarities end there. The Fusion uses much more advances lenses with a lower f stop. The Fusion is also much larger than the Insta360, which is small enough to fit in your jacket pocket.

The Insta360 is designed to attach directly to your phone or be used interdependently with a tripod or selfie stick. The Fusion can only be used on its own and will connect to your phone wirelessly. 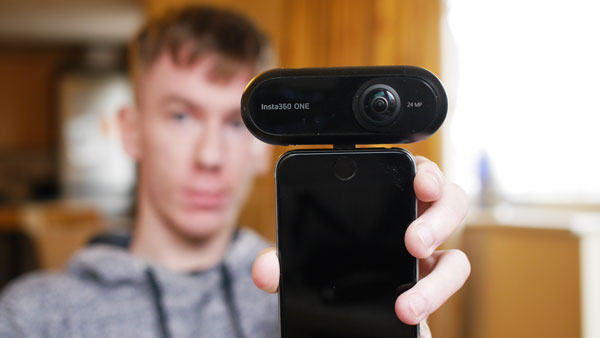 The Fusion is cased in a protective rubber shell, which allows it to be fully waterproof for up to 10ft. The Insta360 body is plastic and not waterproof, however there is a waterproof case accessory available. 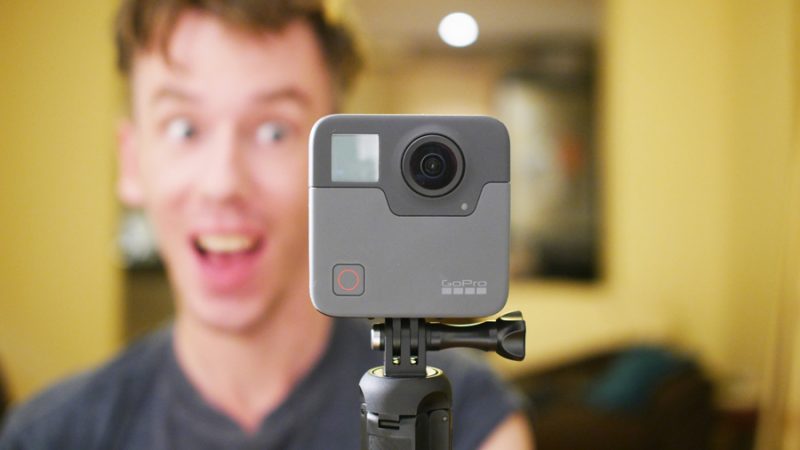 The most obvious difference in terms of specifications in the photo and video resolution. The Fusion can shoot higher resolution video and the Insta360 can shoot larger photos. While resolution does matter, you also need to consider the quality of the optics used to take shoot the images.

Other differences include the requirement for two MicroSD cards for the fusion and the lack of Ambisonic Audio on the Insta360. But what does all of this mean and is it important? Let’s take a look at what really matters when comparing 360 cameras.

If you buy either of these cameras you’ll probably want to shoot some 360 video, so which one is better for this? The answer is pretty clear; the GoPro Fusion shoots far better quality 360 video than the Insta360 One. Not only can the Fusion shoot 5.2K resolution video compared to the 4K the Insta360 is limited to, but the Fusion features much more advances lenses. Take a look at the video’s below to see the difference between the two cameras.

The Fusion is able to capture a much more detailed image, with a much higher bit rate. The Insta360 looks slightly blurry in comparison and it’s less capable of capturing accurate light. Most importantly the dynamic range of the Fusion video is far better, which makes it look much closer to HD quality we are used to seeing. The Insta360 is still capable of shooting excellent 4K video, but it is limited by weaker optics which can’t capture the same level of detail. 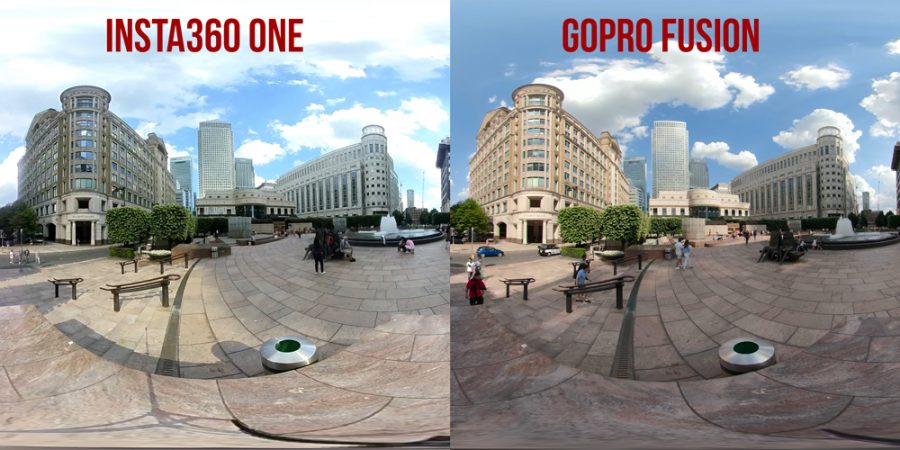 So if you are looking for a 360 camera to shoot video and you want the best possible quality, then the Fusion is definitely the clear winner in this comparison. What you should keep in mind is the difference in price between these two cameras; the Fusion is nearly three times more expensive than the Insta360, and the video quality is not three times better.

One similarity between the Fusion and the Insta360 is that they have software that allows you to manipulate your 360 video into a normal flat video. This is called overcapture or free capture and looks pretty awesome when done well. You can create cinematic, smooth video that can point in any direction.

The quality of the Fusion’s 360 video means that its overcapture video does look better than the Insta360’s, however the Insta360 has more options available to manipulate the video. The Insta360 free-capture software is simple and easy to use, and you can achieve great results just by using your mobile.

A very important feature for all 360 cameras is stabilization. No one likes to watch shaky video, but this is doubly important when watching 360 video, so cameras with better stabilization have a big advantage. Thankfully both of these cameras feature excellent software stabilization which can smooth out most bumps and vibrations when running, walking or when attached to a vehicle.

As for which is better, it depends on the situation, but I’ve found the Insta360 to be extremely good at creating smooth video when moving, which is extraordinary considering its low price. In any case if you are looking for a 360 action camera either of these choices will allow you to shoot smooth video.

Both of these cameras can shoot 360 photos as well as video, and unlike video it’s harder to determine which one is better in this regard. While to GoPro Fusion has superior optics, meaning it can capture more accurate light and better dynamic range, the resolution of its photos is limited to 18mp. The Insta360 One can shoot much larger photos at 23 megapixels. 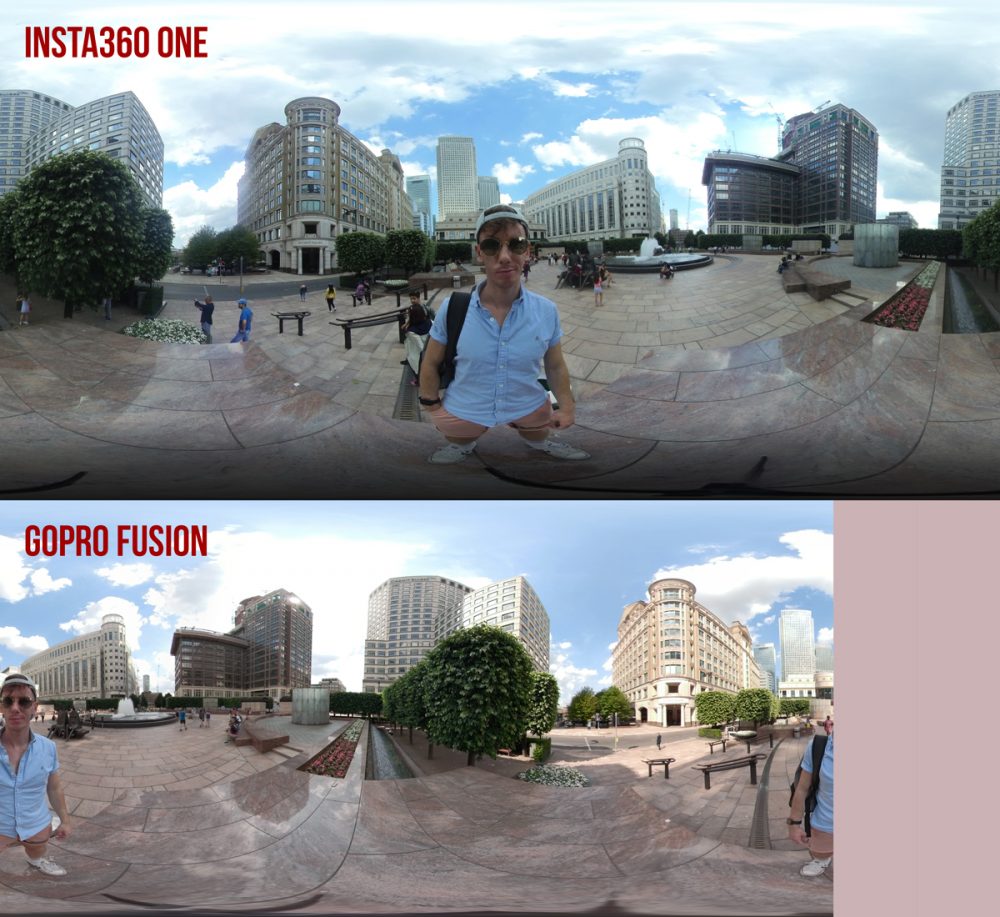 I’ve found that the Insta360 photos tend to look sharper on larger screens, however the Fusion Photos look better on smaller smartphone screens, where a large resolution isn’t as important. Both cameras can shoot RAW photos, which opens up a lot of editing opportunities in post production.

Both cameras also allow you to manually control exposure, ISO and light balance, however the Fusion is missing one very basic feature, a timer!

Having awesome hardware is great but if the software controlling it isn’t up to scratch then the overall experience can be frustrating. Neither of these cameras have perfect software, however one has a particularly terrible app. GoPro have had issues with software before, however the Fusion takes it to a whole new level. I’ve found the app that control the Fusion to be very slow at best, unresponsive at worst. Moreover it fails to connect to my modern Samsung Phone but works OK with a much older iPhone 6. Fortunately you can control the Fusion manually with physical buttons, but it’s a shame such an expensive camera is let down by its app.

The Insta360 One App is much more stable and easy to use, but isn’t perfect. I often lose connection with the camera if I’m more than a few feet away, and it cannot provide a live preview of your image.

Both cameras also have dedicated desktop software which are both far better than their mobile counterparts. The GoPro Fusion studio allows you to make a wide range of adjustments to your video before you stitch and render it, and the Insta360 Studio lets you quickly reframe your 360 video.

Software is a weakpoint for both cameras, however I would have expected more from the much more expensive Fusion.

If you want to know which of these is the better 360 camera, then my answer would undoubtedly be the GoPro Fusion. It can shoot much better quality video and is simply a premium product designed for the prosumer market, who are perhaps more serious about 360 media. The Insta360 on the other hand is target more at the casual user; having said that it is excellent value for money and in some ways outshines the much more expensive Fusion.

Both cameras are available on Amazon. Click the buttons below to see the cheapest listing.