The most important aspect of any 360 camera is the resolution that the camera is able to shoot in. It is generally accepted that 4K resolution is the minimum required for 360 degree video to have a decent quality appearance. The past year has seen the release of 5 consumer 360 cameras that can shoot in 4K, but which is the best? This table compares the features of every 4K 360 camera available right now. 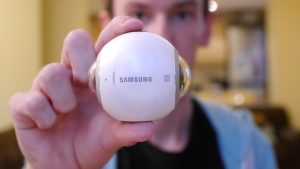 Samsung’s first 360 camera has turned out to be one of the best, beating traditional camera makers. The Gear 360 can shoot 4K 360 video with no blind spots and 30 megapixel stills. The videos are clear, smooth and look HD. The accompanying app is excellent and can control the camera from quite a distance; you can change settings such as ISO, HDR, timer, timelapse and color balance. 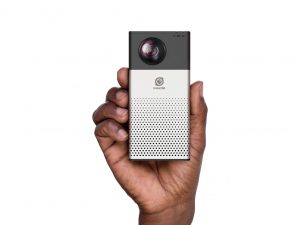 The Insta360 4K is part of a range of 360 cameras built by the same Chinese company. Whilst Chinese products tend to have a less than favourable reputation, this camera certainly bucks the trend. The Insta360 4K is made with high quality materials and works very well as a 360 camera. It shoots 4K video and its candy bar shape makes it easy to hold and shoot. It comes with a phone app compatible with iOS and Android, so this could be a great alternative to the Gear 360 if don’t have a Samsung phone.

The only issue is the price, which at $599 makes the Insta360 4K one of the most expensive consumer level 360 cameras. 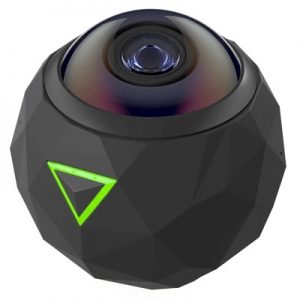 The 360Fly 4K is marketed as an action camera similar to GoPro, except this action camera can shoot in 360 degrees! However, as the camera only has one large fish eye lens there is a blind spot underneath the camera that will be a small black circle in the final video.

The 360Fly is waterproof to 30ft, shockproof and dustproof. It can be attached to bikes, cars, helmets, ski’s, surfboards and practically anything else! The 360 video is high quality and clear, however you are limited to how long your videos can be. Each video clip can be a maximum of 2GB in size, which for a 360 video is around 3-4 minutes.

This was the first 360 camera to be mad by one of the traditional big camera producers and there were high expectations that this 360 camera would be the best yet. Customers were disappointed to find that the camera was shipped with incomplete software making it frustrating to use. While the camera can shoot full 360 video in 4K resolution, getting the camera to actually do so proved difficult for users.

Nikon has released a few updates to rectify the issues, however the camera still suffers from bugs and inefficiencies. A great shame and an embarrassment for such an iconic camera designer. 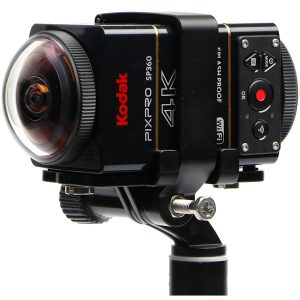 Yes, Kodak still make cameras! They were actually one of the first to release a 360 camera under $1000, this is their second generation 360 camera which shoots in 4K resolution. The biggest downside to this camera is that it’s actually 2 cameras put together and each needs to be purchased separately. This make the device quite expensive and a hassle to use. Once the combined power of both cameras is used however, the resulting 360 video and images are high quality with excellent color depth and a smooth framerate.

You have the option to buy just one of the cameras for half the price, however you will then only be able to shoot 360 X 215 degree video, meaning there will be a blind spot below the camera.

So by looking at the 4K 360 camera comparison table and the individual analysis what can we conclude? For a start the Samsung Gear 360 (review here) is the cheapest by quite a large margin, but does this mean it’s inferior to its more expensive counterparts? Not necessarily. The Gear 360 can shoot 4K video in full 360 degrees, it has an excellent low aperture and a range of manual controls. All in all I’d say it was the best camera out of the lot and certainly the best value.

Many of the other 4K 360 cameras, such as the 360fly 4K (review here) and the Kodak SP360 4K, have a limited field of view, meaning there will be a blind spot in the images they create. It seems strange, then, that these camera would be significantly more expensive than the Gear 360. Some of these cameras do have features that the Gear 360 lacks, such as waterproof and shockproof, which may explain a rise in price. If you want a more durable camera for shooting sports or activities then the 360Fly 4K is the best option.

My personal opinion is that the Gear 360 is the best value 4K 360 camera and indeed one of the best regardless of price. The Nikon Keymission has slightly more impressive specs, but has turned out to be a poor quality camera (check amazon reviews) and the Insta360 4K is too expensive.