The Nikon Keymission 360 was released last week after months of sky high anticipation. On paper the camera looked to be one of the best consumer 360 cameras ever produced; it shoots in 4K, has a full 360° field aof view, is waterproof, shock proof and has the iconic Nikon brand to back it up.

All Nikon needed to do was ensure the two lenses inside the camera could shoot clear, sharp images and this would be a surefire hit. Surely Nikon, who have spent decades designing the best lenses in the world, could manage this? As it turns out, no. 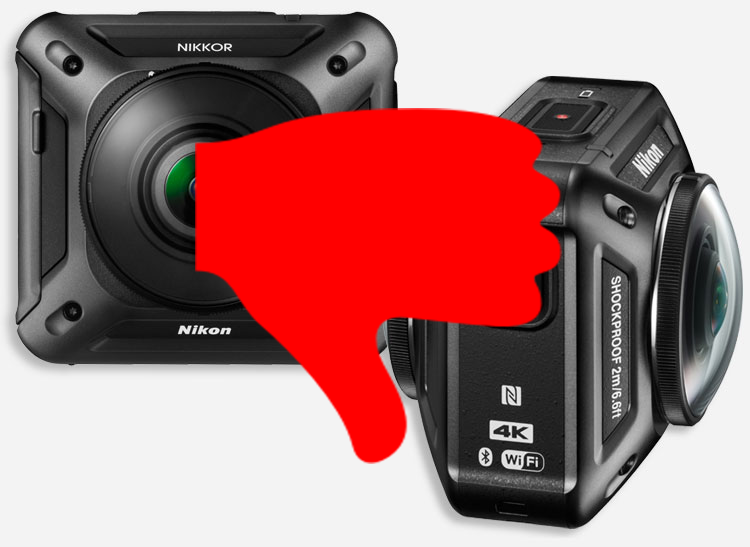 The camera currently has 2 stars on Amazon after 30 or so reviews. Most of the comments mention the poor image quality, lack of sharpness, the inability to manually control the camera, an un-intuitive app, the list goes on!

Even the Keymission 360’s standout feature, the fact that it’s waterproof, has been the subject of disappointment. It turns out that to use the camera in deep water requires a cover which results in a big black line cutting through the footage or image shot with the camera.

This really is a disaster of a release. What was supposed to be a contender for the best 360 camera now appears to be one of the worst, certainly not deserving of its $500 price point.

Lack of advertising and previews could have been the writing on the wall.

The power of hindsight is strong, but looking back it does seem like Nikon knew their product was not particularly good and maybe we should have spotted this. There has been next to no publicising or advertising for the camera and it was difficult to find preview images and videos from the camera in the weeks running up to release. In contrast, Samsung widely publicised the release of the Gear 360.

The lack of information is actually the reason I did not buy the camera myself. I thought it best to wait a few days until the reviews come in, now I’m glad I did.

Can the Nikon Keymission 360 be saved with software updates?

Are they working on a fix before commenting? Most of the Nikon Keymission 360’s issues stem from the software controlling the camera. Image quality and sharpness can be improved depending on the software handling the image processing and the app can obviously be changed. Samsung released a software update which dramatically improved the stitching accuracy of the camera, Nikon could do the same.

The hardware specifications of the Keymission 360 remain solid, minus the slight design flaw when used underwater. My guess is that Nikon rushed the software development in order to get the camera out before the Christmas shopping period starts.

Or is it too late?

When new technology is released, it’s not unreasonable to expect a few flaws that can be ironed out in future updates, however the Nikon Keymission 360 was simply not ready to be released. The damage is done to the name and the brand; even if Nikon release huge software updates dramatically improving the image quality, it probably won’t make up for releasing a very expensive but poor quality product.

It still remains to be seen if Nikon will even try and improve the camera, or just consider it a lost cause and abandon it completely

Alternatives to the Keymission 360

If you ask me, the only try alternative to the Keymission 360 is the Samsung Gear 360. Near identical technical specs but the Samsung can produce stunning quality 360 video and stills, it’s also significantly cheaper.

You can also check out my 360 camera comparison page and compare all the top 360 cameras out at the moment.