The first all in one 360 camera to feature 1 inch lenses. If you are looking for professional quality 360 images in an easy to use package then the Z1 is for you.

As with their other camera in the Theta line up, the Z1 utilizes a candy-bar shape which makes it easy to use both handheld and with a tripod/selfie stick. The Z1 is the thickest of all the Theta cameras but it also packs in two large 1 inch sensors, quite a feat of engineering for an all in one camera. 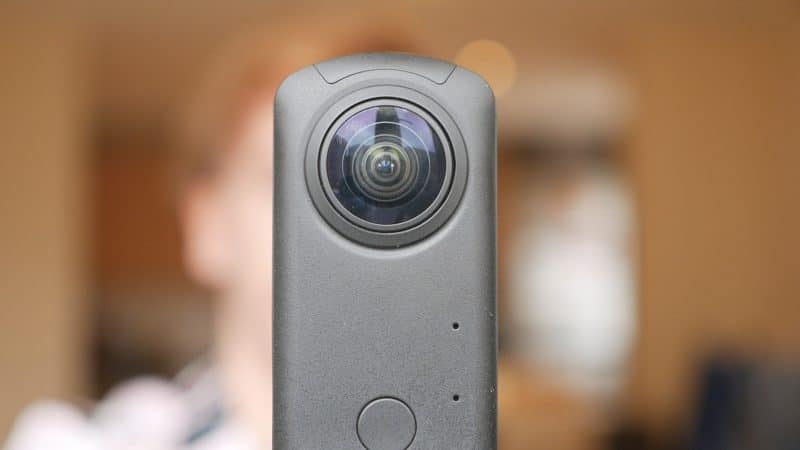 Ricoh never disappoints in terms of build quality with the materials used in the Z1 being high quality. Thw addition of an LCD screen is welcome and allows you to view battery and memory. You’ll find a few manual controls at the side of the camera which are useful for quick adjustments however full control of the camera can only be achieved when connecting to the official phone app.

If you were going to buy the Ricoh Theta Z1 you would do so because of its ability to shoot very high quality 360 photos. There are many 360 cameras out right now but most focus on video rather than photography; the Z1 takes the opposite approach. There are three features in particular that make the Z1 an excellent 360 camera for photos.

The Z1 is the first all in one 360 camera to use dual 1 inch lenses, this allows the camera to capture far more light and detail compared to its competitors. Lens quality, rather than image resolution, is far more important in determining the final quality of the images. Using 1 inch sensors also allows the Z1 to work well in low light conditions and indoors, environments where 360 cameras usually struggle. Check out this low light tour I shot with the Z1.

Probably the best feature of the Z1 is its ability to shoot RAW images. This, combined with the 1 inch sensors, allows the camera to capture huge amounts of detail. 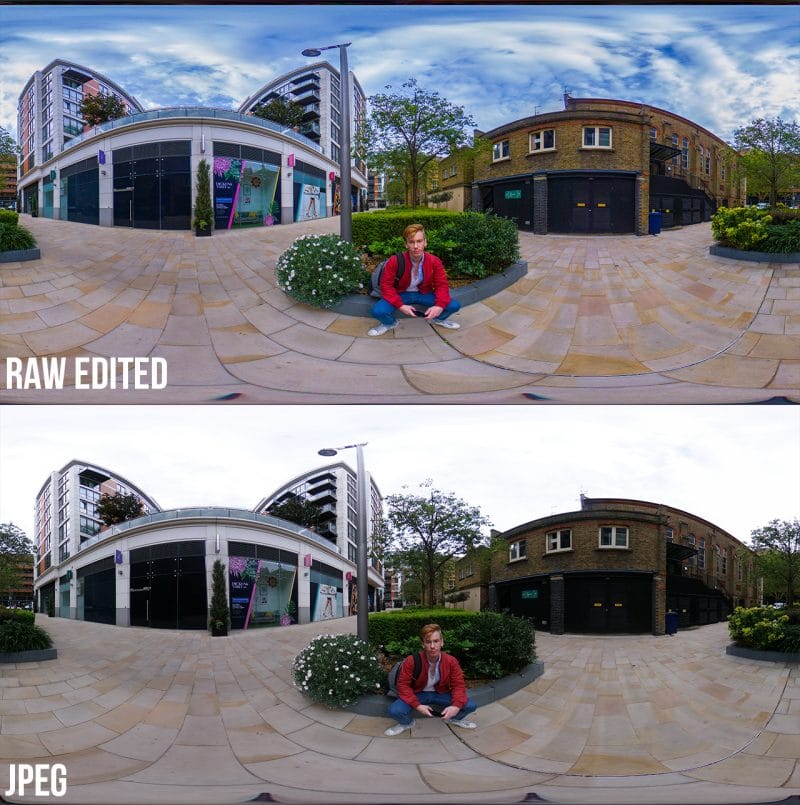 With some editing you can achieve image quality close to what you get with a DSLR set-up. Shooting RAW files does require you to undertake some editing, thankfully Ricoh have also made this easy.

The final feature that makes the Z1 a great all in one package for photos is the Adobe Lightroom plugin that Ricoh developed specifically for the Z1. This plugin allows you to import your RAW Z1 files and edit and stitch them directly in lightroom. Prior to this plugin editing RAW 360 images in lightroom would have left an unsightly seam line therefore making the final 360 image useless. Lightroom allows you to massively improve the quality of your RAW images quickly and efficiently. 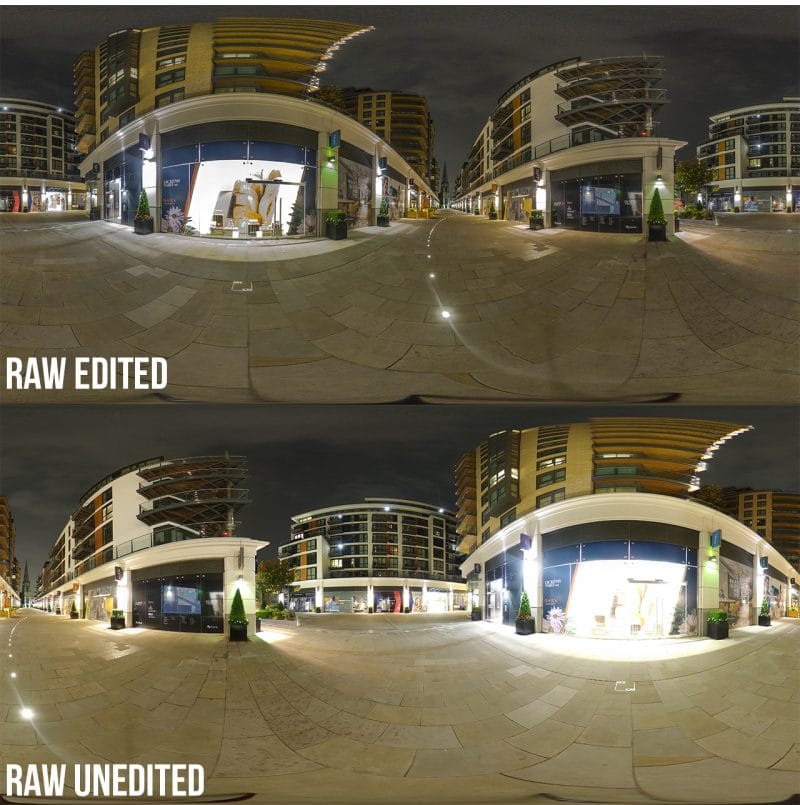 These three features working in tandem makes the Ricoh Theta Z1 the perfect camera for anyone looking to shoot high quality 360 images with a quick turn around and with minimal editing.

Another unique feature of the Z1 is variable aperture, allowing the camera to change how much light is let into the lenses. This is the first all in one 360 camera that has this feature and highlights how Ricoh is attempting to give the Z1 as many DSLR-like options as possible.

I would recommend always shooting in DNG RAW mode as this is how you’ll get the most out of this camera, however there is also an auto HDR image mode which combined 3 exposures to achieve a better looking image. Using this mode allows you to skip the Lighroom editing and still have a fairly decent looking image. 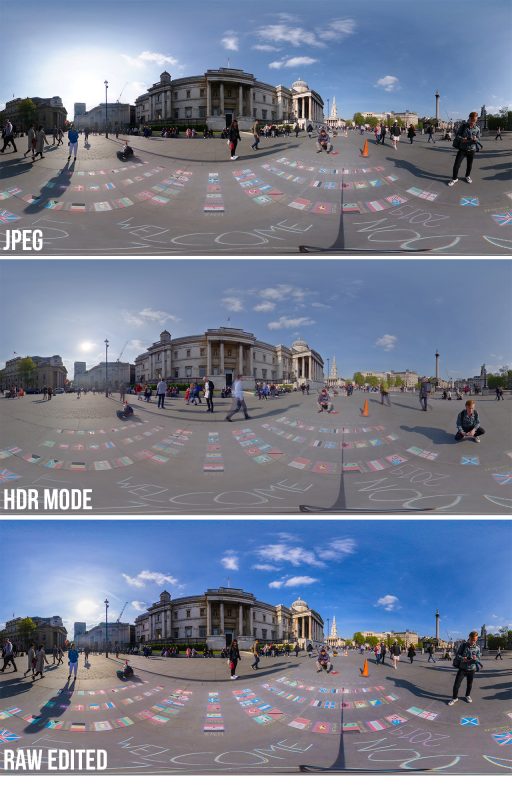 The Z1 can shoot 360 video at 4K resolution. There is no upgrade in resolution compared to the much cheaper theta V, a fact that has not gone unnoticed. While the lack of a resolution upgrade is disappointing that doesn’t mean the video quality isn’t superior. Those 1 inch lenses also work in video mode to capture excellent dynamic range and more accurate lighting.

The camera also features 4 microphones which can capture ambisonic audio which is great for immersion when viewing back on a VR headset.  On ths other hand there is very little in the way of software stailization so moving with the camera is probably a no-go. The Theta Z1 is certainly much more focused on photography than video so bare this in mind when deciding whether to buy it.

When great hardware is not backed up by equally good software it often leads to a frustrating loss of potential. The Theta Z1 certainly has excellent hardware and thankfully Ricoh have put equal effort into the software ecosystem making the Z1 a user friendly device.

The Theta App that controls the camera has been updated and connect reliably, providing instant previews and a wide range of options. Using the App you can exert full manual control over the Z1 just like you would on a DSLR. 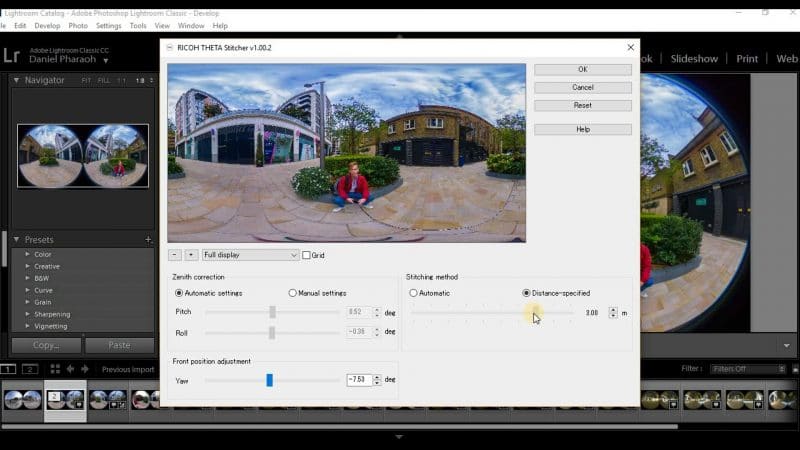 Ricoh’s Lightroom Plugin is a new piece of software and is very easy to use with a low learning curve. It allows you to stitch your RAW 360 images in Lightroom and has some options for changing stitch distance and starting position. The Plugin is reasonably basic but does what it says it will do.

While I do think that the Z1 is a great camera it certainly isn’t perfect. There have been some cost cutting measures which are disappointing and possibly unnecessary. Firstly the battery in non-removable which means you’ll want to bring a portable charger for longer shoots. Most frustratingly is the lack of expandable storage meaning you are stuck with the 19GB of internal storage included within the camera. If shooting videos this space will fill up quite quickly but it’s  probably enough for several hundred photos.

The Theta Z1 is the best sub $1000 camera for 360 photography and the easiest to use. It’s perfect for professionals who need higher quality 360 images with a low learning curve and quick turn around. While the price is certainly on the high side,and you’ll need a subscription to Adobe Lightroom to get the most out of it, for businesses who need a 360 camera for professional use its certainly worth the price.

The Ricoh Theta Z1 is available to order on Amazon in both the UK and USA. Click the button to be taken to the listing.