The Ricoh Theta V is the latest in a line of 360 camera from Ricoh, which is quickly developing a reputation as a leader in immersive content creation. The last iteration, the Theta S, was particularly well received and became the best selling 360 camera of the past year, but it lacked a few features that many new 360 cameras now posses. The Ricoh Theta V seeks to bring the brand back to the top of its game; 4K 360 video, spatial audio and a lightning fast processor are the headline features.

After using the Theta V for over a month I can confirm that Ricoh has maintained its run of excellent devices. It is perfect? No. But I’d confidently say that the Ricoh Theta V is the best all-round 4K 360 camera as of now.

A moderate upgrade from the previous model, now with stunning 4K 360 video and spatial audio. Missing a few key features that may disappoint some. 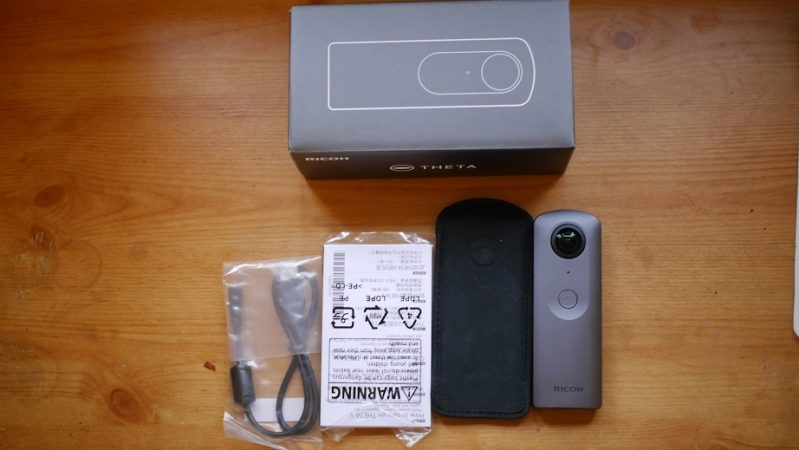 The candy-bar shaped camera is accompanied in its box by a USB cable for charging and transferring data, a small manual and a perfectly shaped case. Nothing remarkable here apart from the lack on a mini tripod, which is often included with 360 cameras. The Theta V is one of the only 360 cameras that can stand independently without a tripod so that may be the reason they didn’t bother to include one.

The design of the Ricoh Theta V is excellent. The candy bar shape is perfect for hand held use, it can stand independently but still be attached to a tripod or selfie stick if necessary. The Manual shutter button at the front is perfectly placed and the few other manual controls are clearly labeled.

The camera feels like a premium product and while it’s made out of plastic, it’s not the cheap kind. The two lenses protrude out of the top of the camera and you’ll need to be careful not to damage them, don’t carry the camera in a bag or your pocket without using the case. The lenses are also prone to smudging, so a fibre cloth may be another useful accessory to have.

The camera is reasonably thin, meaning the lenses are close together. This is good, because the closer the lenses are the less obvious the stitching line will be.

Let’s get to the important stuff. The Theta V can shoot full 360 video at 4K resolution, which is common among newer 360 cameras and considered desirable for good quality video. The Ricoh Theta S was limited to 1080p video, which by today’s standard is very poor, so it’s great to see Ricoh catch up in this regard. Resolution isn’t everything however, equally important is the quality of the lenses inside the camera, and this is where Ricoh says they have the edge.

Ricoh has said they upgraded the lenses with technology found is DSLR cameras and that the new processor can capture lighting and color more accurately. Let’s see if there is any merit in this.

This first video test of the Ricoh Theta V was shot in cloudy, overcast conditions. The Theta V performed very well when still on a tripod, but when moving the lack of stabilization makes watching the video difficult. The Theta V shoots very clear video with little noise or grain, it captures details and colors very accurately. Perhaps one issue is that it can overexpose very bright areas, like where the sun in shining from, but this is a common issue among 360 cameras.

Let’s look at another video, this time comparing the Theta V to one of its competitors.

In this video I compared video footage  from the Theta V with another new 360 camera, the Insta360 One. I concluded that the Theta V produced better 360 video then the Insta360 One, despite a lack of video stabilization. You might notice the video shaking in the Theta V footage, this is because it was on a very high tripod on a windy day, probably not how you would normally use it. Never the less, the lack of stabilization is a big omission which limits what you can do with the Theta V.

Despite this, it definitely shoots superior video, particularly at low light. The Theta V can capture color accurately and lacks the grainy noise found on the Insta360 One.

Manual options for video are limited, but you can alter exposure to adjust for different lighting conditions. You can also change the resolution from 4K (3840 x 1920) to HD (1920 x 960) but there’s literally no reason why you’d want to do this.

Another huge improvement on the Ricoh Theta V is how it records audio. The camera comes fitted with 4 separate microphones in various positions on its body, allowing it to record spatial audio. Spatial audio allows you to experience sound more realistically and is important for immersion; the Ricoh Theta V is one of the only 360 camera to have this feature.

Ricoh are taken audio even further by offering a 3D audio accessory which attaches to the base of the camera, this audio recording captures hyper realistic audio for crystal clear sound. This doesn’t come cheap though, the audio recorder is over $200! 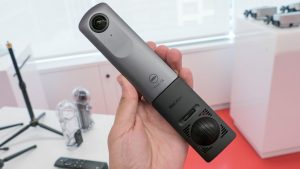 When the Ricoh Theta S was released it was considered to be the best 360 camera for taking photos. I don’t think that Ricoh Theta V can claim the same, but it’s still a decent camera for 360 photos.

The Ricoh Theta V can shoot 360 stills at 15 megapixels, which is actually the same as its predecessor. Many people have complained at the lack of a resolution upgrade, and i agree it’s a shame, but there have been improvements.

The Theta V does have an upgraded processor which allows it to capture more details, colors and light. But the best new feature in terms of photography is the instant HDR mode. This mode allows you to capture real HDR photos at the click of a button; the camera takes three photos simultaneously and blends them together to create the best photo possible.

See the difference between a normal and HDR photo: 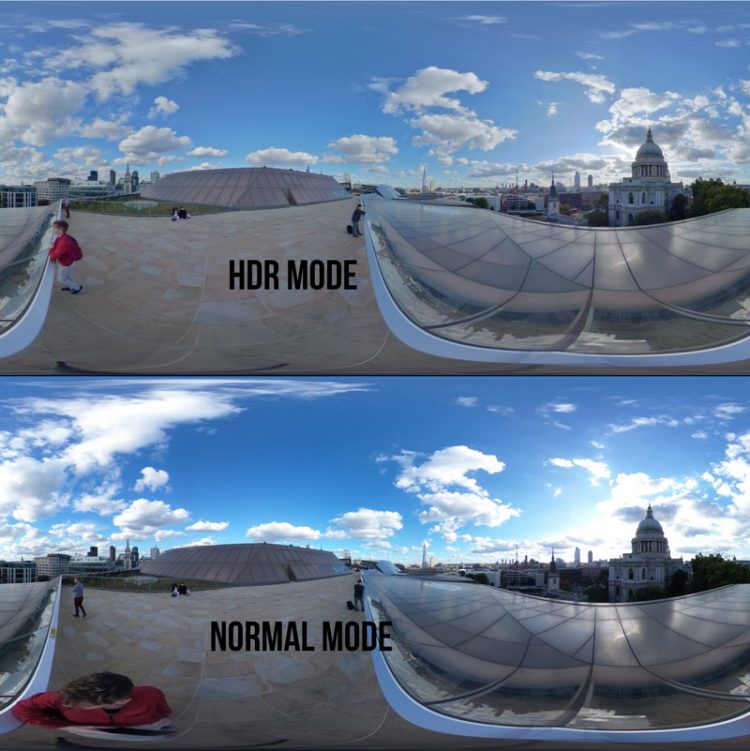 HDR improves the lighting immeasurably and leads to an overall better photo. This is an option not found in any 360 camera I know of.

While fast processor and HDR are welcome addition, but the relatively low 15 megapixel resolution does become noticeable when viewing images on a large screen or VR headset. If you mostly plan on sharing your 360 photos on Facebook then the Theta V is still one of the top 3 camera for 360 photos.

Like all 360 cameras, the Theta V is controlled by an app. The app is actually called Theta S in the Google Play Store, but also works with the Theta V. Apps are available for both Android and Apple phones.

As of writing this review, the app could do with some work. It’s rather slow to load, buggy when running and forces me to manually reconnect to the Theta V WiFi every time I use it. These are issues that are annoying, but not necessarily a deal breaker. 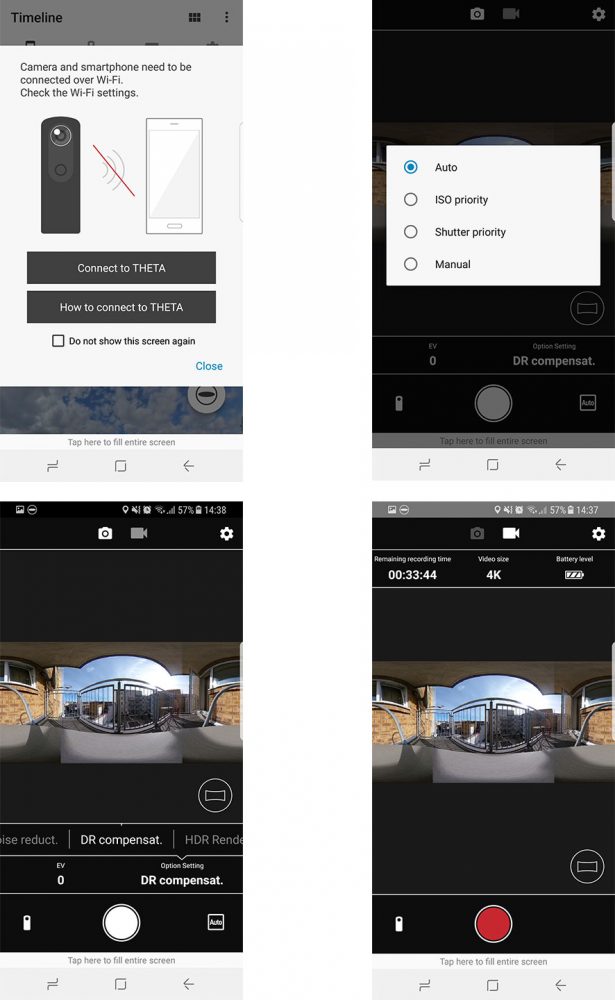 The app allows you to manually control the camera, particularly in photo mode where there are quite a large range of options, from ISO to Exposure and Shutter speed. Of course you can just leave everything where it is and the camera will do a fine job.

The app also allows you to view your content and share it across social media. This is achieved fairly effortlessly. While the app needs some work, it’s by no means a disaster, but expect a bit of frustrations ever now and then.

Livestream: The Ricoh Theta V can livestream in 4K. I’m not a big fan of livestreaming, but when I tried to test it I honestly couldn’t work out how to do it. The feature is there but it must be hidden quite well.

Memory: The Theta V features internal memory of 19GB with no option for expansion with a Micro SD.  This rather limits how many videos and photos you can take, especially considering how large 360 videos can be. You can always clear space on your camera by transferring files to your phone, but it’s something I’d rather not be worrying about.

Waterproof: The Theta V isn’t waterproof out of the box, but you can buy a special case which will allow you to take it for a swim. This case is pretty expensive though.

There are issues with this camera, and features are missing that really shouldn’t be. Never the less, I’m nothing but impressed with the 360 video coming out of this camera. With the exception of the 5.7K Garmin VIRB 360, the Theta V shoots the best 360 video of any camera under $1000 (as of now, new cameras coming all the time!).

Photos are less impressive, but still beat out pretty much every other camera bar one or two. The app isn’t a great experience, but once you’ve set up the camera you can forget about it. The design of the camera is the best of any 360 camera and using it by hand feels natural.

The most annoying omission from this camera is stabilization, which means I can’t recommend this camera if you intent to do any kind of moving action shots. But if you intend to shoot mostly still 360 video, then this is the camera to get

The Ricoh Theta V is available on Amazon, either independently or with the extra accessories I mentioned.