Should you get the Insta360 One X2 or the GoPro Max? These two 360 cameras are similar in many ways but they have some key differences. In this post I’m going to compare the Max and One X2 in detail. We are going to look at the video quality, photo capabilities, software options, hardware quality, software options and any other unique features.

If you need to choose between these two cameras then this post should point you in the right direction.

The GoPro Max was released in late 2019 and is the second generation 360 camera from GoPro. The Max became the best 360 camera at the time thanks to its excellent video quality, easy to use editing app and excellent design. GoPro’s products tend to come with a certain premium feel which you certainly get with the Max.

The One X2 is the newer camera having been released in November 2020 and is the follow up to the very popular One X. Along with improved color & processing power the One X2 has been redesigned to be more rugged and easier to use.

Both cameras are primarily designed to be action cameras. 360 cameras make for particularly great action cameras because they are able to create unique shots while maintaining excellent stabilization. You can also use these cameras for vlogging or creating VR videos. These are the two top 360 cameras out now so let’s find out which one comes out on top.

When it comes to raw specifications the One X2 and Max are very similar. Both cameras shoot the same 5.7K 360 video resolution. When reframed these videos end up as 1080p flat video. The Insta360 One X2 can shoot in 30, 25 & 24fps at the full resolution and at 50fps at 4K. You can also shoot 100fps slow motion video at 3K resolution. 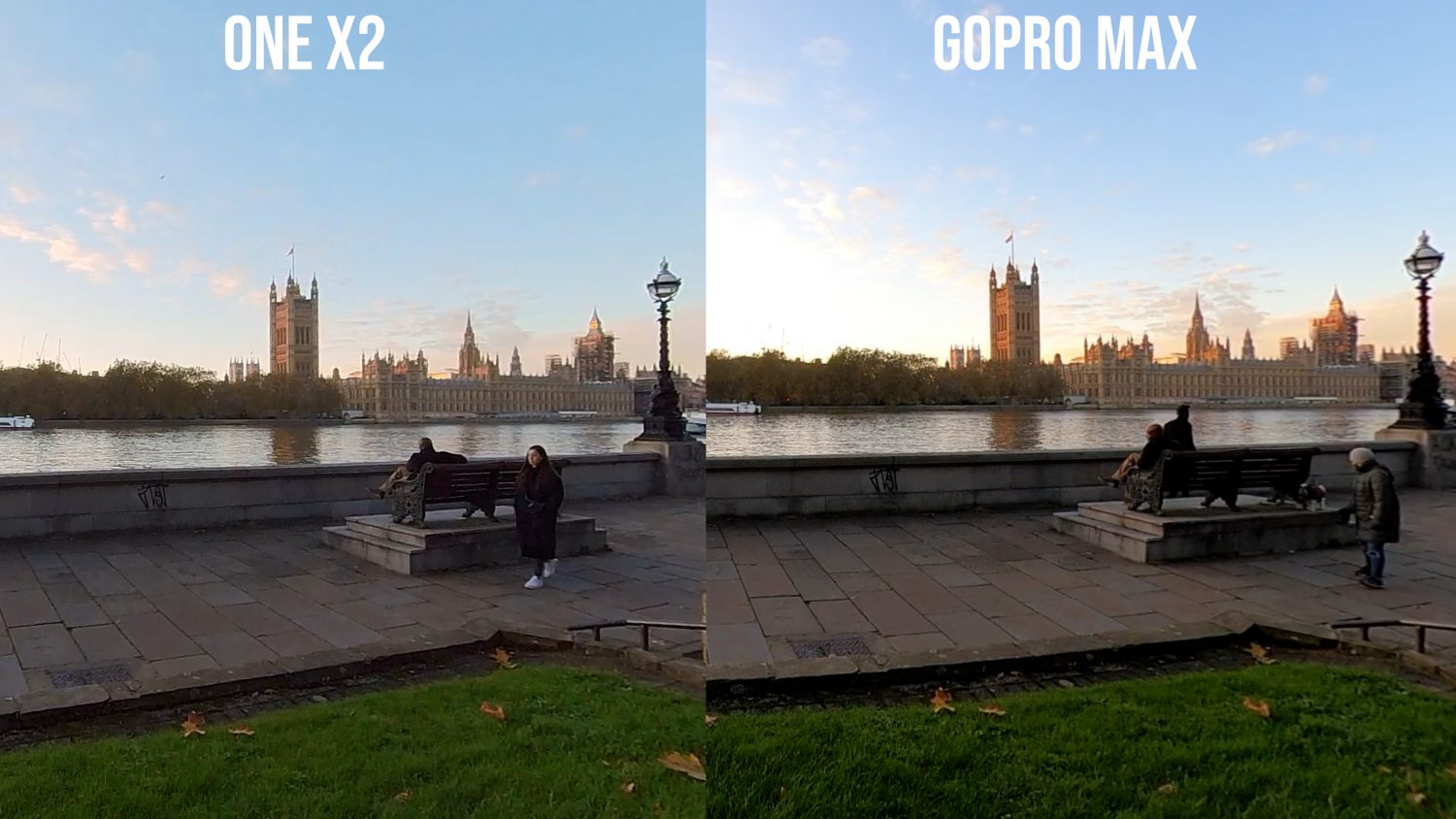 Just because both cameras have identical video specs doesn’t mean the video looks the same.  While the Insta360 One X2 can shoot at a higher bit rate it seems the GoPro Max has superior color technology. I have a hunch that GoPro also uses superior lens technology in the Max. The One X2 video looks good but it more noisy in dark areas. 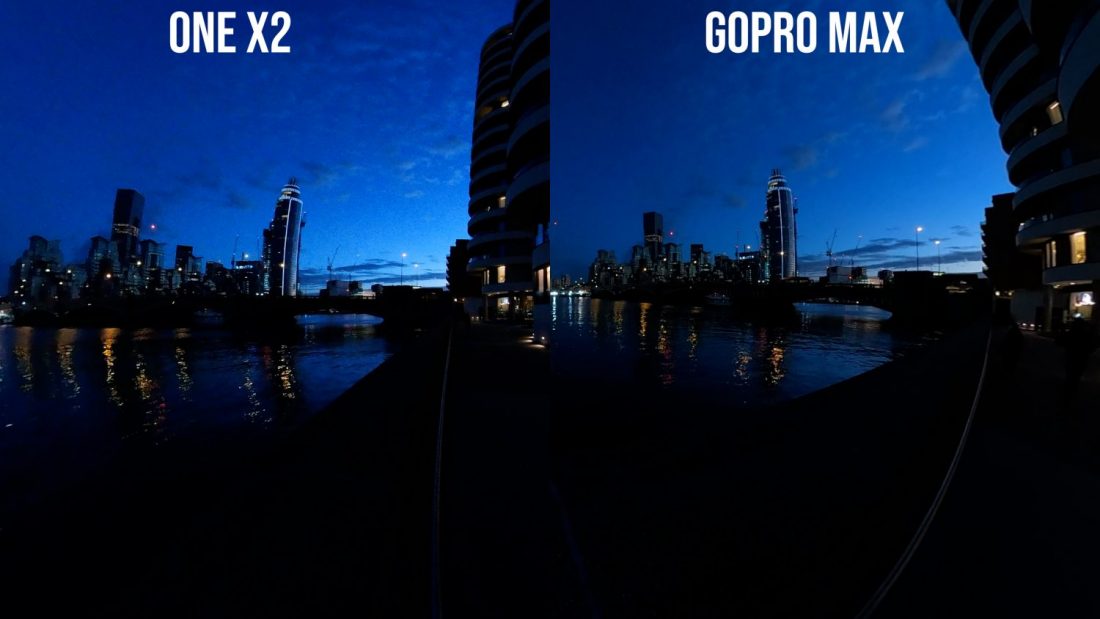 The One X2 also features a video HDR mode which improves the dynamic range of your video considerably, however it only works while the camera is motionless.

In reality there isn’t much between the two but overall I do prefer the overall color and quality of the GoPro Max video. On the other hand the One X2 has more shooting options, including LOG mode which allows for better post production editing.

Both cameras have a single lens shooting mode which allows you to shoot “normal” non 360 video. The single lens mode in both cameras is limited to 1440p at 30 & 60fps. Using this mode is like filming with a standard non 360 action camera. While the resolution is quite limited the advantage is that you get the epic stabilization without any extra editing. 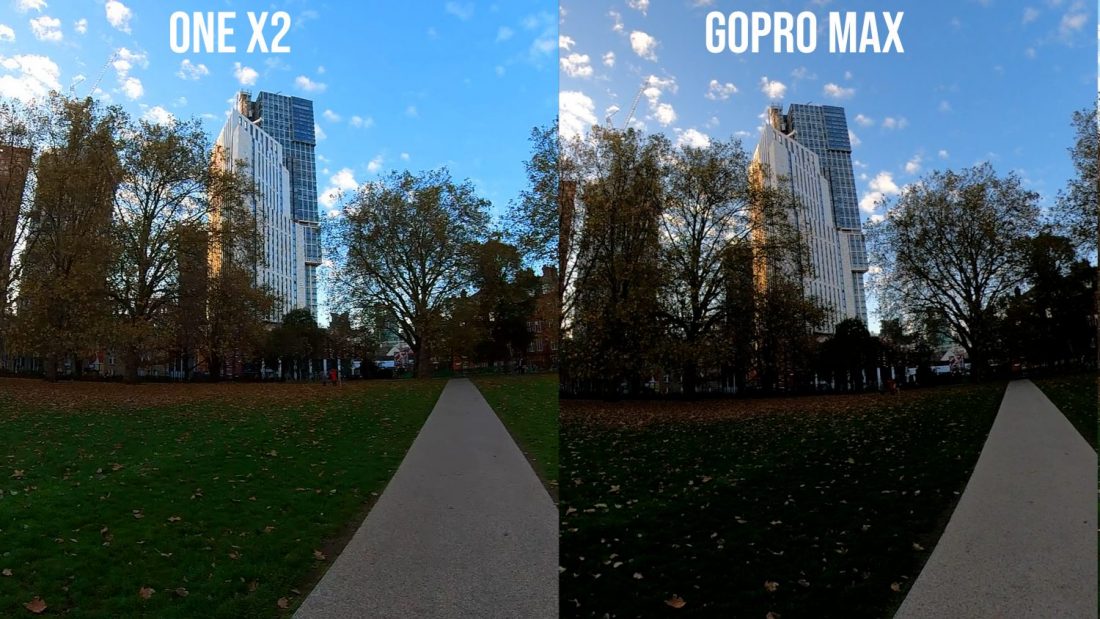 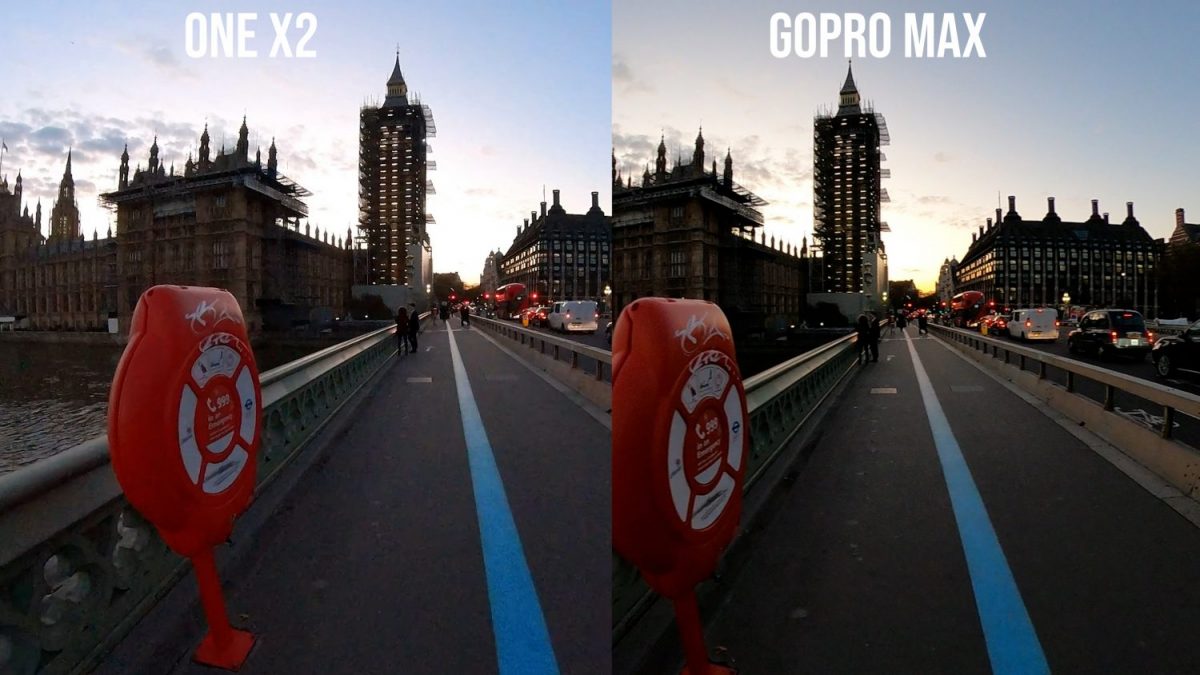 Once again the difference between the two is limited. The main difference is the color processing which can result in different color shades; this will be a matter of preference. The Max seems to shoot slightly darker video but the One X2 is a bit noisier.

When it comes to shooting 360 photos the One X2 comes out on top. The Pureshot mode available with the X2 automatically boosts the quality of your photos by combining multiple exposures without any editing required. As well as this the One X2 can shoot HDR photos and RAW images. 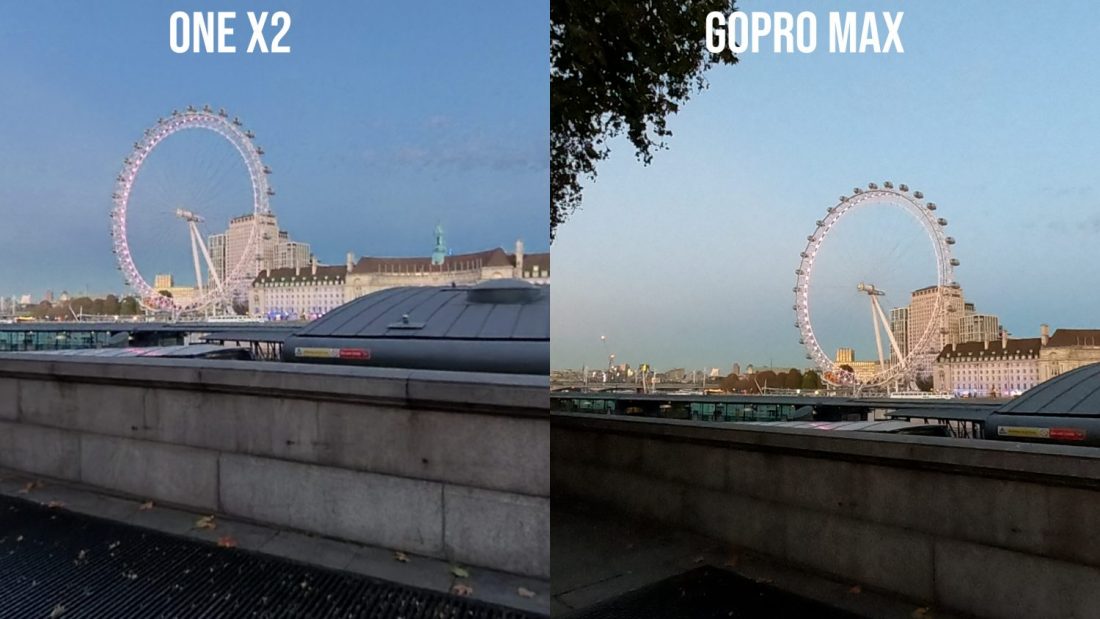 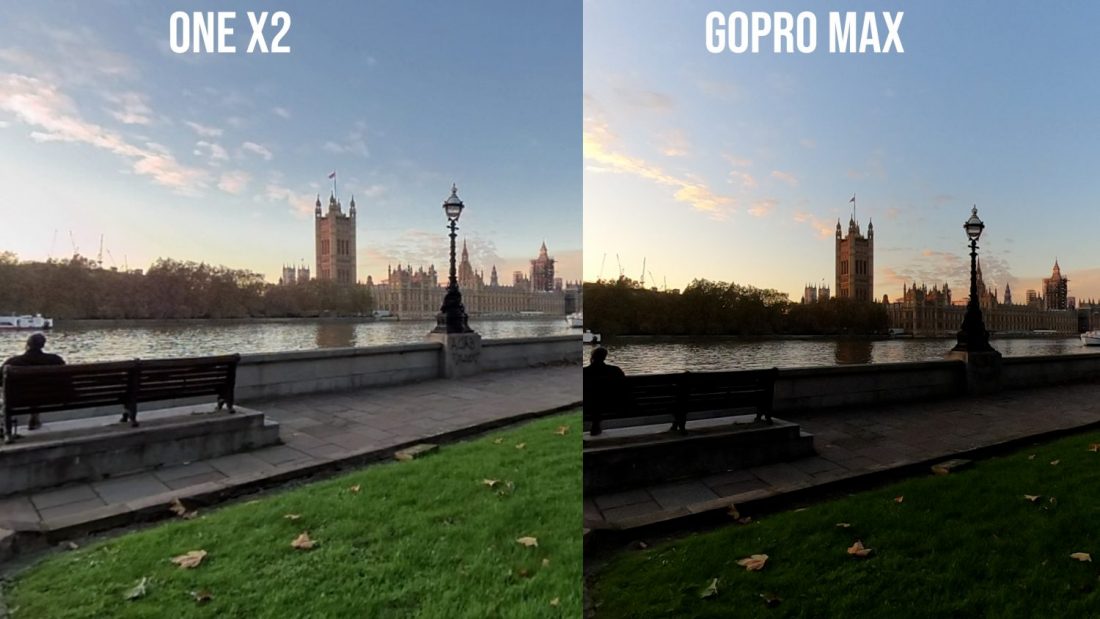 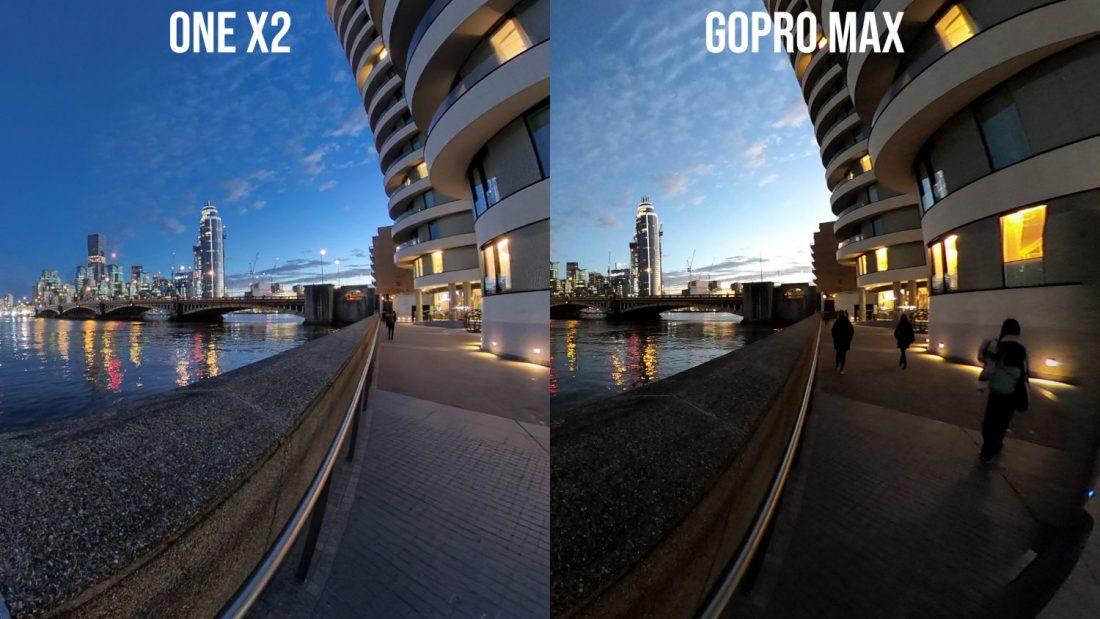 In comparison the GoPro Max has minimal photography options. There’s no HDR mode nor can you shoot RAW images. The photo quality from either camera isn’t of a professional standard but certainly the One X2 is the better of the two.

GoPro Max
The second GoPro 360 camera shoots 5.6K video with the best stabilization ever seen. Perfect for any kind of action shot
Get the GoPro Max

What makes both of these cameras quite exceptional is the epic stabilization technology which keeps even the most extreme action shots looking smooth. GoPro calls its stabilization software Hypersmooth 2.0 and Insta360 calls their Flowstate. Other than the name, the difference between the two is minor and both work very well to stabilize any kind of action shot.

It’s very difficult to say if one has better software stabilization then the other. If you are looking specifically for an action camera then you’ll have to look at all the other features to make your decision.

When it comes to photography the story is quite different. The One X2 features a wide array of photo options including HDR, Pureshot and RAW. Photo resolution is capped at 18.4 megapixels and you have full access to manual controls.

Both the GoPro Max & Insta360 One X2 are deigned to be action cameras and like most action camera they offer a rugged design and some protection. The Insta360 One X2 is a candy bar shape the two lenses protruding at the top. A round touch screen in the centre of the camera allows for full control over all settings as well as video preview. 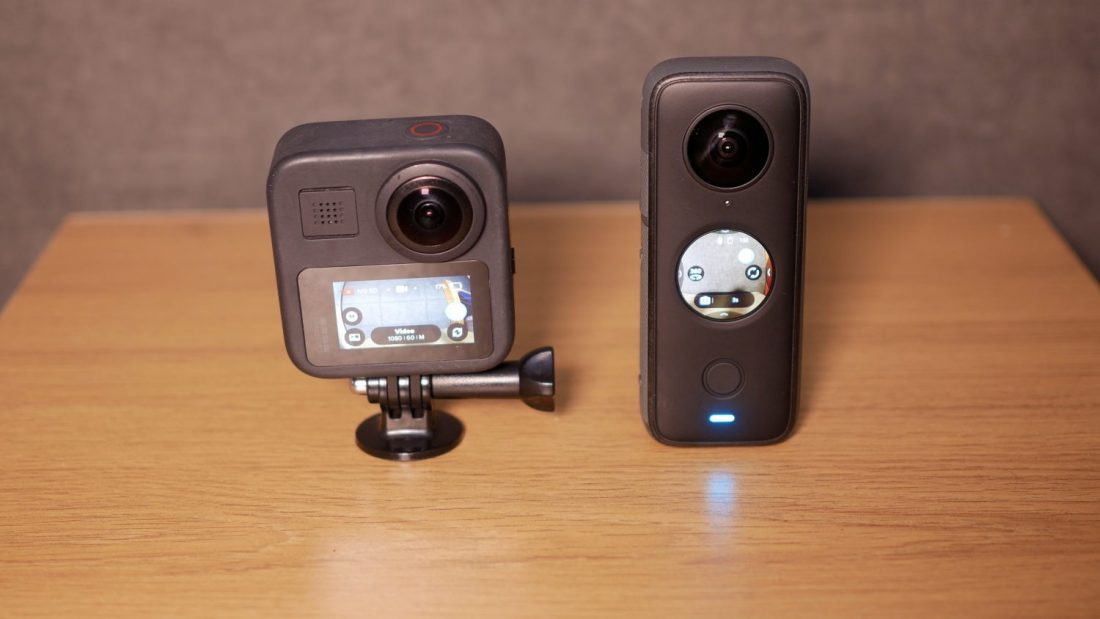 The One X2 offers full waterproofing up to 10 metres as well as a thick plastic body. You’ll also find textures rubber for easier gripping. The One X2 feels well designed and the locking mechanisms that keep the camera waterproof seem like they’ll last the distance. 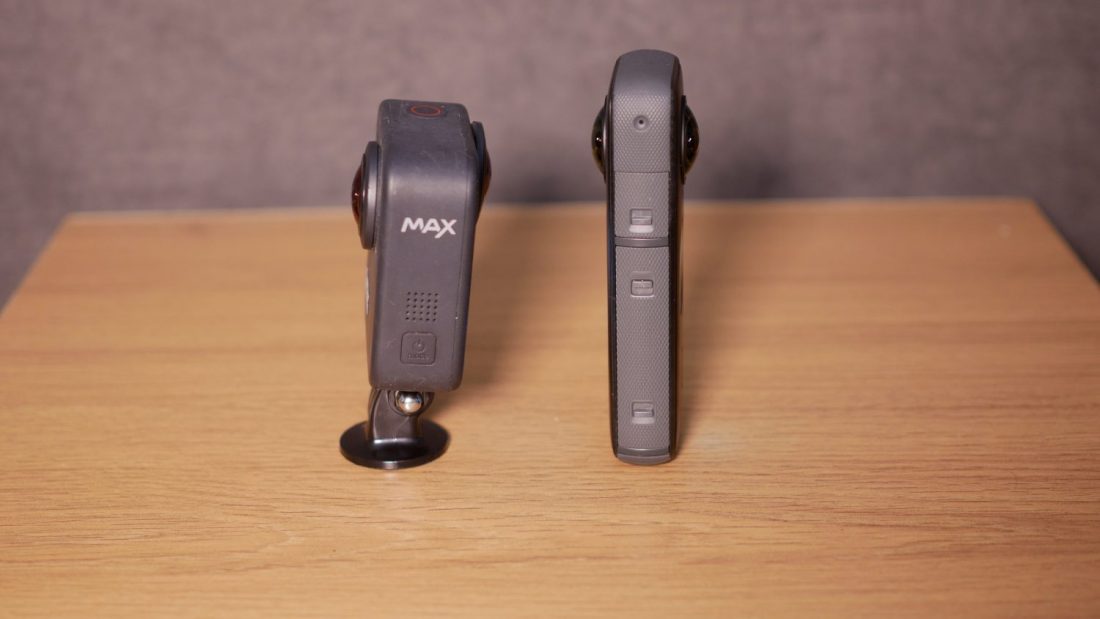 The Max is a square shaped camera with a large touch screen and two lenses on each side. The screen on the Max is larger and therefore easier to use. The Max is also a camera built to be used in various environments. Water resistance is equal to the One X2 at 10 metres without the need for a case. The Max is made mostly from a thick rubber coating and hardened plastic. The cameras comes with lens protectors.

The One X2 features a standard 1/4 inch mount whereas the Max features GoPro’s mount design which is compatible with multiple accessories. Both cameras are well built and don’t feel like they will break easily. In both cases the lenses are vulnerable. The Max comes with lens protectors in the box whereas you have to buy One X2 lens protectors separately.

The design of both cameras allows them to be used underwater up to 10m.

There are a lot of similarities between these cameras and you may still be finding it difficult to choose between the two. Where the cameras do diverge is the software they have developed such as desktop editors and apps.

Editing apps are an important thing to consider for every 360 camera as these types of videos have excellent editing potential. Both GoPro and Insta360 have tried to create easy to use apps which allow you to create unique & high quality video. There are some pros and cons of each platform so pay attention to the differences! 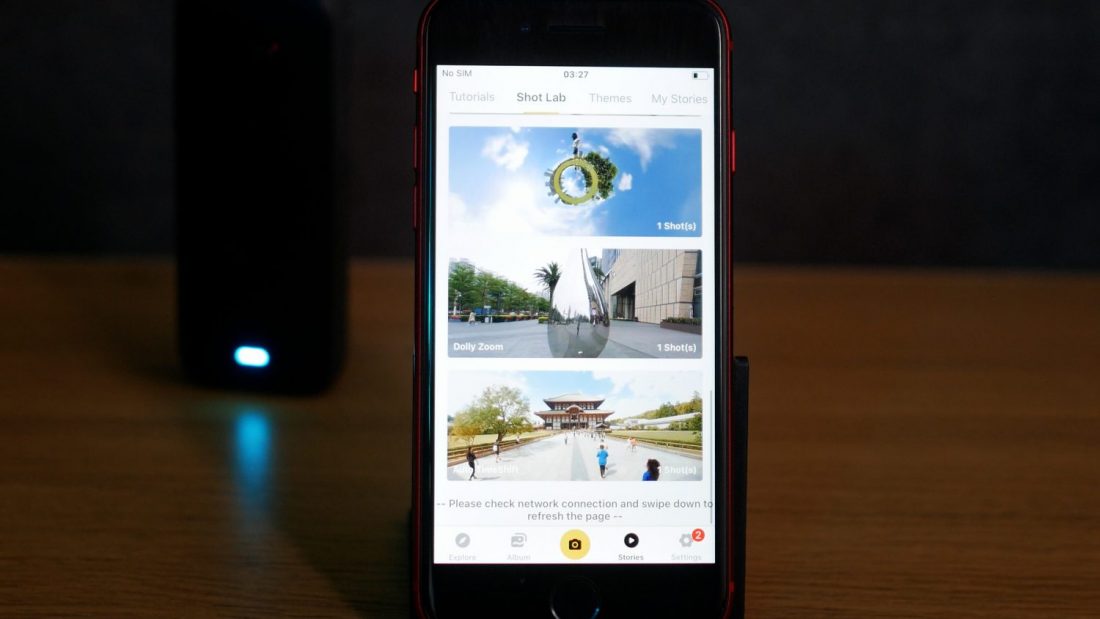 The best thing about the Insta360 mobile editor is that you can edit your videos without having to transfer files to your phone. Just connect to the camera and start editing. This makes the editing process much more quick and efficient.

As well as these automatic editing features the Insta360 App has an in-built color editor, filters, speed adjuster and an object tracker. The tracker is very effective at following a person throughout your video, perfect for action shots like skiing & skateboarding where you want to focus on a single person. 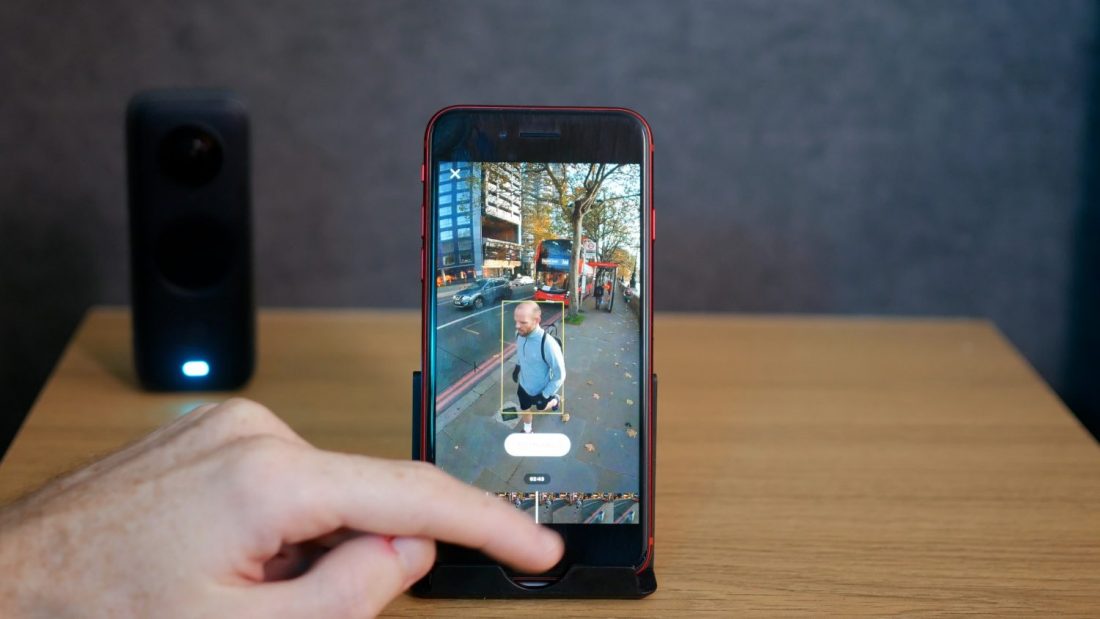 While the Insta360 App is easy to use, full of features and particularly innovative it does have some problems. The app requires a pretty powerful phone to use all functions and even then it can be prone to freezing and crashes.

In comparison the GoPro editor isn’t as feature packed but tends to be more stable. The GoPro app also has an automatic editor where you can create vlog-like videos as well as add music, titles and transitions. You can reframe your 360 videos quickly and easily as well as adjust the color/appearance of your videos; but the app lacks advanced features like an object tracker. 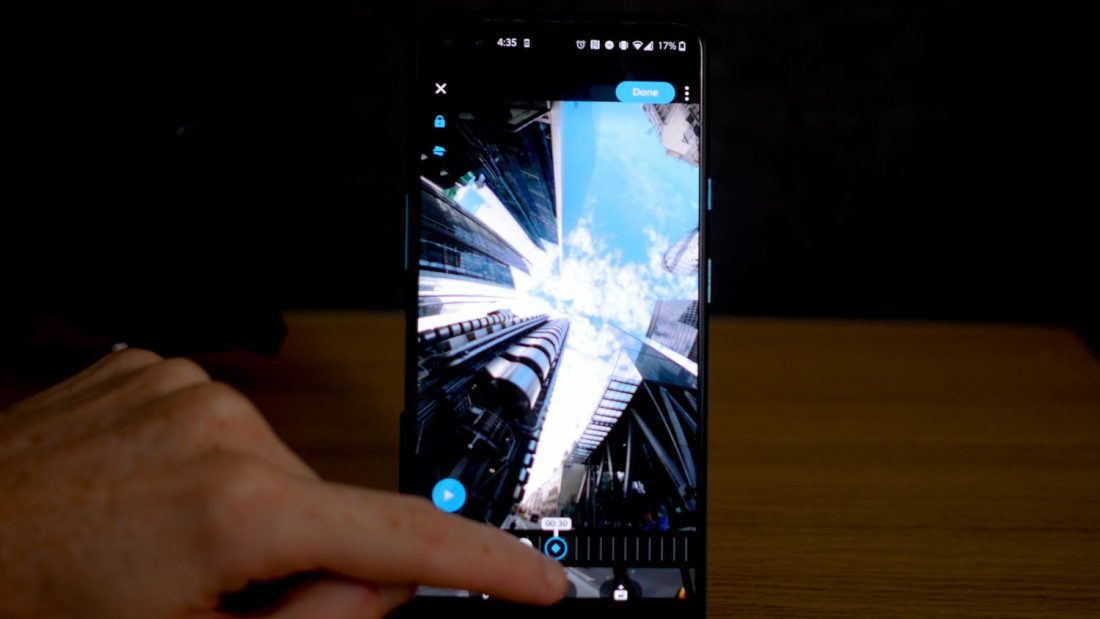 The most frustrating thing about the GoPro app is that you need to transfer all your files over to your phone before editing. You also need to re-frame each 360 file individually before using the automatic vlog creator – a long process. 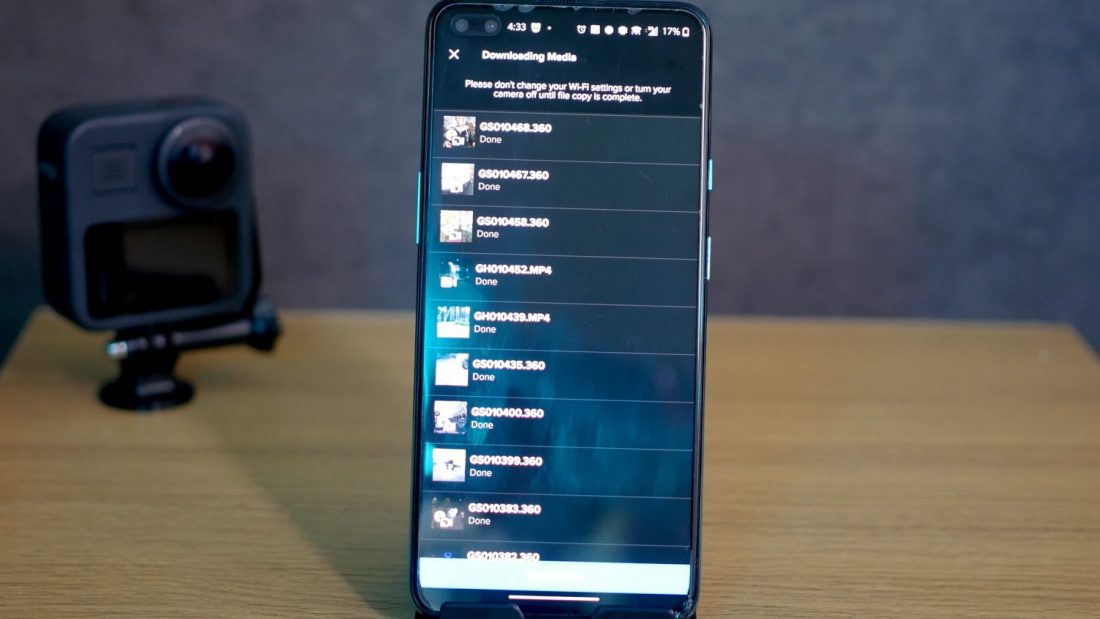 Overall the Insta360 app tends to be more popular as you can create more types of videos, special effect and cinematic video. New features are being added quite regularly and there’s plenty of support available. The GoPro app is still a good but far more basic editor with a longer workflow.

There’s no denying that these are two very similar cameras. Both are primarily 360 action cameras with the added ability to use one lens to shoot normal video, so in both cases these are two cameras in one. The GoPro Max tends to shoot slightly higher quality video and probably features more advanced lens technology, however the Insta360 has more effective software as well as much better photography features.

In either case your experience with both cameras will be pretty similar; for photography the One X2 is the much better option but it’s a slightly less reliable camera.

GoPro Max
The second GoPro 360 camera shoots 5.6K video with the best stabilization ever seen. Perfect for any kind of action shot
Get the GoPro Max
SaveSavedRemoved 0