The GoPro Max and Hero 9 are the flagship cameras from the leading action camera company. The Hero 9 is the latest in a long range of “Hero” cameras and features the best video quality of any GoPro camera. The Max is a second generation 360 camera which is able to shoot unique shots not possible with other GoPro cameras, it also features a lower quality “Hero Mode” which essentially makes it two cameras in one.

It’s important to highlight that the Hero 9 and Max are different cameras that fulfil different needs. It’s hard to directly compare them as they are not really meant to compete with each other. The Hero 9 is focussed on providing the best video quality possible in the action camera format while the Max allows for the most creativity.

Which one you choose will depend on the type of videos you want to create and how much editing you are willing to do for each shot. Both cameras are great at what they do but bare in mind this quality vs creativity decision when comparing videos from each one directly.

The Hero 9 is the first GoPro in the Hero range to shoot 5K video. This is quite a boost from the Hero 8 and allows the camera to shoot the best quality video of any GoPro camera. Looking at clips shot with the GoPro it’s clear that the high resolution results in exceptionally sharp video.

GoPro has a reputation for having among the best color technology in the industry and the Hero 9 benefits greatly from this. The camera can capture excellent dynamic range, colors look realistic and details are most preserved. The Hero 9 works best in daylight conditions but struggles at night time and you’ll likely notice noise in dark areas. This is hardly surprising and is a limitation of all action cameras which use small sensors in their lenses.

The various video resolutions and framerates available in the Hero 9 give you some creative control over the style of video you capture. Shooting in 4K at 60fps is a personal preference of mine and is the best way to capture smooth moving video and maintain high quality. The Hero 9 is capable of this as well as super slow motion 120fps @1440p and 240fps @1080p. Slow motion is quici and easy to capture and will look better than anything your phone can shoot.

The Hero 9 is also the first GoPro to feature a detachable lens. GoPro will be releasing other lenses in the future which may add new functionality to the camera.

Having used the Hero 9 since its release I’ve been extremely impressed with the video quality you can capture with this little camera. There are plenty of manual options for you to play with and the end result is truly impressive for a camera that can easily fit in the palm of your hand,

The GoPro Max is a different beast all together, but in some ways even more impressive. The Max features two lenses which it uses to capture 360 video at 5.7K resolution. While this is higher than the Hero 9 the end result is less sharp video, this is because the 5.7K pixels has to be spread around 360 degrees where as the Hero 9’s 5K pixels fits into just 120 degrees or so.

While the 360 video isn’t as sharp it does have huge creative potential. When shooting in 360 you are capturing the whole envirnment around you at once. You don’t need to point your camera at the action as it will always be capturing it. There’s literally no way to miss any moment when shooting in 360.

You can then take this 360 video and use the pretty awesome GoPro app to reframe (choose where the camera is pointing after you’ve shot the video). Here’s what a reframed video shot with the Max looks like.

The type of shots you can get with the Max is beyond anything the Hero 9 can offer, but there’s a significant sacrifice in quality. If you leave your 360 video untouched (non-reframed) you can upload it as an immersive video which can be viewed on a VR headset.

The other mode available in the Max is Hero Mode which uses just one of the two lenses to shoot “normal” video. This is a good addition for people who like to mix 360 and standard video together and essentially turns the Max into two cameras in one. Hero mode is limited to 1440p @30fps or 1080p @60fps. Quite limited resolutions in 2020 but still good enough if you are shooting content for social media.

You’re probably not going to be buying either of these cameras for the sole purpose of shooting photos, but it’s nice to have the option. In this case the Hero 9 is definitely the better camera for photography in this comparison.

The hero 9 has several photo modes including HDR and RAW which can result in some pretty impressive pictures. Will it beat a DSLR? Absolutely not, in fact some modern phones will out shoot it, but for some quick shots it’s no slouch.

Unfortunately the Max can’t match up to the Hero 9 as it lacks the same photo options. It’s only advantage is that it shoots immersive 360 photos which can be fun to play with; otherwise I rarely find myself bothering to use the photo mode.

The reason anyone buys an action camera is to shoot awesome video while moving. This could be simply vlogging or dare devil stunts. Either way these types of should require good stabilization and in the past few years GoPro has perfected software stabilization so you don’t need any extra gear. 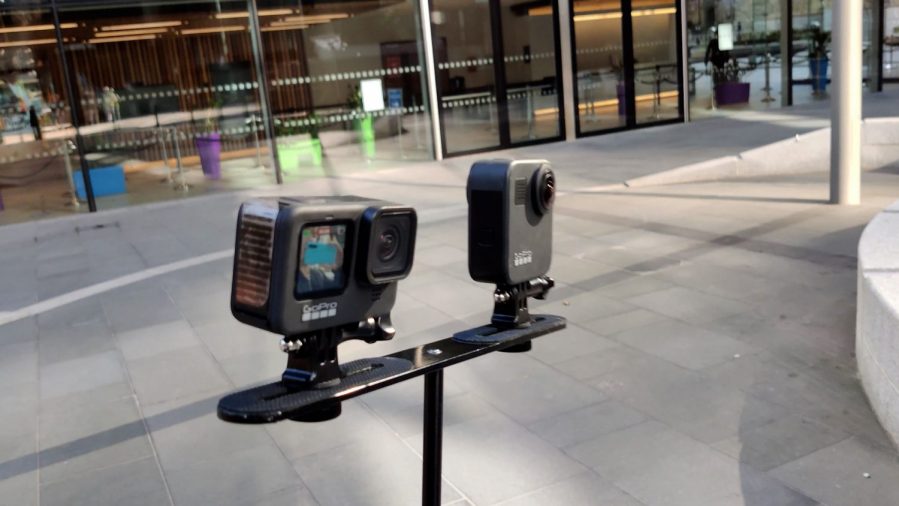 Hypersmooth is the name of this software and it allows you to shoot moving video without worrying that your video will be unwatchable. Hypersmooth is installed on both the Hero 9 and the Max, however they work slightly differently.

The Hero 9 has the latest version of Hypersmooth installed and it provide the best stabilization of any standard action camera ever. I’ve tested it and it works amazingly well to smooth out action shots. There is a limit to what it can do, for example spinning upside down will still result in some pretty tough to watch video, but for the most part it works well.

To get the best stabilization GoPro offers a specific video mode for action. This mode will reduce the video quality to 2.7K but will enable a stabilization “boost” which you should use for your most extreme action shots. If you want to maintain the highest quality then you’ll have to sacrifice some smoothness.

While the Hero 9 stabilization is very impressive it can’t beat the Max. 360 cameras will always beat standard action cameras when it comes to shooing moving video, this is because they have so much more footage to work with. Even the most extreme action shots will look almost professional when shot with a 360 camera with software like Hypersmooth.

Again, this extreme stabilization comes with the caveat of lower quality when shooting in 360, but I think it’s more than worth it. Both the Hero 9 and Max feature a video mode called Timewarp. This is essentially a moving timelapse (also known as a Hyperlapse) and was once limited to high budget productions. Software stabilization allows cheaper cameras to create the same effect.

A timewarp shot with the Hero 9 maintains the high quality and high resolution, however you are limited to pointing in a single direction. Shooting a timewarp with the Max allows you to change direction and looks far more cinematic, this does take longer to shoot and requires more editing in post production.

Both the Max and Hero 9 continue the long established tradition of excellent build quality that GoPro has entrenched in all of their products. The Hero 9 is the first GoPro to feature two screens, a large touch screen at the rear and a small display at the front. This allows for easily self filming and vlogging as you no longer need to guess whether the camera is pointed correctly. 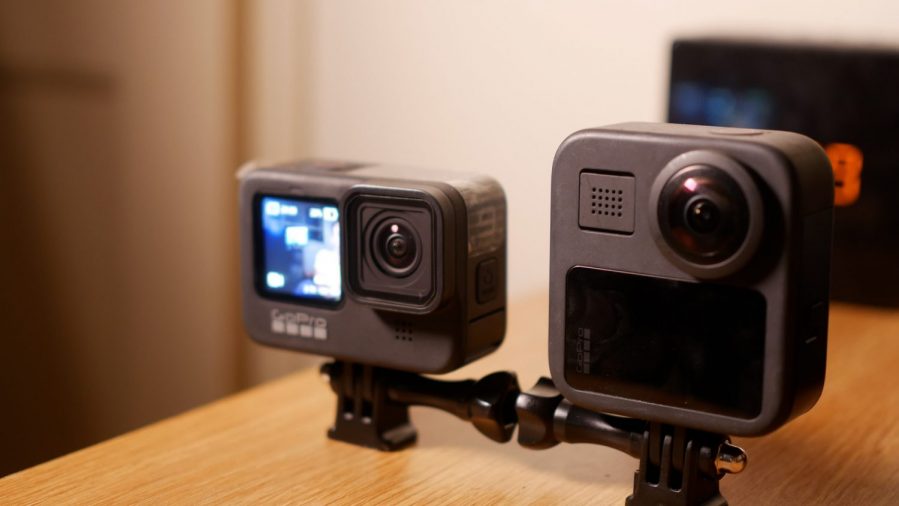 The Max features a single large touch screen, however when shooting in 360 you don’t need to worry where the camera is pointing as you’ll always be in the shot. Both cameras feature a built in GoPro Mount and they are both water resistant up to 50m.

Which Should You Buy

Comparing the Hero 9 and Max is like comparing a motorbike to a car; both a can be awesome but you’ll probably prefer one over the other. As I said at the start of this post the hero 9 is designed for maximum video quality in mind, and it achieves this. It also comes with the latest GoPro innovations like Hindsight shooting, detachable lens and multiple screens. It’s certainly the most advanced GoPro camera ever.

The Max is a creative editors dream; you’ll likely spend more time in the app tinkering with the video then you will shooting it. You can create some truly unique shots with the Max that isn’t possible with the Hero 9, they just won’t look as sharp.

So there we have it; are you looking for creative potential (get the Max) or the best video quality (get the Hero 9). Either way you’ll be very impressed and I’m glad to see GoPro is back at the top of its game.