Prefer to watch  a video?

So I’ve had my Samsung Gear 360 for nearly 10 months now. I’ve used it a fair bit (although, not as much as I’d like to) and I think I’ve got the hang of how to use it effectively.

So to save you some frustration in the future, and to ensure you get the best out of you camera, here are my 8 tips for using the Samsung Gear 360 effectively. If you own a different brand you should still read on because these tips apply universally to every kind of 360 camera.

1. Get a tripod that doesn’t have a wide base.

The Gear 360 comes with its own mini tri-pod which is great if you have a flat surface like a table to put it on, but otherwise it is limited. To have full control over the height and and position of the camera you need a proper full height tri-pod.

Now you may already own one of these and it will certainly work with the Gear 360, however if your tripod has a wide base or a lot of sticking out parts at the top you may notice an issue after taking a few 360 photos. A 360 camera will capture the whole space surrounding the camera, including what is underneath it. If you’re tripod has too much going on at the top or has a very wide base your camera will capture this and it will show in the pciture as a blurred mess.

I suggest you get a tripod that is as thin as possible, has a small base and no controls or prongs at the top. This is the tripod I’m using: 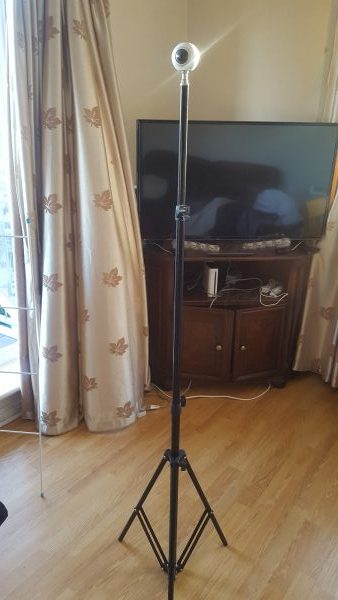 Here are a selection of tripods that will work just as well as this one:

2. Try and keep yourself and any objects away from the lenses to avoid bad stitching.

The Samsung Gear 360 uses two fish eye lenses to capture all 360 degrees of the environment, it then stitches these two images together to create a 360 degree image or video that you can look around. The stitching process isn’t perfect unfortunately and any objects that are close to either of the lenses will likely appear chopped in half.

This distortion can be avoided by keeping any objects, including yourself, at least a few feet away from the camera when filming or taking photo’s. It seems the less objects that immediately surround the camera, the better the stitching appears.

Here is an example of a 360 image that shows this issue. The image is generally well stitched together, but if you look down you’ll notice the stitching line in the rocks closest to the camera. If I had used a taller tripod this wouldn’t have been as visible.

3. Keep the lighting even on both lenses

Another issue with stitching occurs when one of the Gear 360’s lenses is exposed to more light that the other. For example if you taking a 360 photo outdoors and one of the camera’s lens was facing directly at the sun, while the other facing into a shadow, one image would appear much brighter than the other and this would make the stictching line (the line where both images meet) very obvious.

To avoid this make sure that each lens is receiving roughly the same amount of light, it out outdoor example you would simply need to turn the camera sideways so that each lens was being hit with the same intensity of sunlight. For indoor shoots just make sure the room is generally well lit from all angles, preferably from above.

Want more tips on how to use your 360 camera? Join my 360 Camera Facebook discussion group

4. Use the time-lapse feature

I think a somewhat overlooked feature of the Samsung Gear 360 is its time lapse feature. I think it’s fantastic, you can film a 4k 360 degree time lapse which looks great in the right environment. Just set up your camera, stick it on a tripod and let it film for at least a few minutes.

I think these videos will look great when viewed on a VR headset; the world rushing around you in fast motion.

5. You may want to change the automatic timer.

My camera has an automatic 3 second timer set for video and photo, meaning the camera would beep 3 times after I had pressed the shutter before taking the picture. This can be useful is some situations but it also lead to a few ruined photos before I realised you could change the timer to zero. This can be done on the camera manually or using the Gear 360 app on a Samsung Phone.

6. You can upload 360 photos straight to Google Street View.

Once connected you can upload your 360 photos to google street view and have potentially millions of viewers. Once you have uploaded enough acceptable photo spheres Google may authorise you as an official Google Street View supplier.

7. There are several places to upload and share 360 media, but they are not all equal.

YouTube was the first big social site to allow 360 video to be uploaded, but Facebook weren’t far behind. You would expect that uploading a 360 video to either site would result in a similar quality video, not so. For some unknown reason YouTube dramatically alters the quality of your 360 video and also crops it, this results in a lower quality appearance.

Facebook, on the other hand, no only leave your 360 video untouched, they also allow you to choose the starting position and input 360 controls to help you guide your audience to interesting points.

I’ve also found that kuula.co is one of the best websites for uploading 360 photos, particularly if you want to embed them on a personal website or blog.

This advice applies to all 360 cameras, not just the Samsung Gear 360.

8. You will get a lot of weird looks, just smile and nod.

The Samsung Gear 360 is a rather strange looking gadget. When you are using it in public people will probably be looking at you wondering what you are doing. I’ve had a few people asking me what that weird round thing is and ‘ve been happy to explain that it is a 360 degree camera (and offer some further clarification on what that means). So if you find people staring at you in confusion, just give a friendly smile and ignore them.

If you follow these tips you should be well on your way to creating great 360 degree photos and video with your Samsung Gear 360. If you own a 360 camera and have some other helpful tips, or you want to ask a question about using 360 cameras, feel fee to comment below and I’ll be sure to reply asap.