If you’re reading this post then you are probably looking to buy a 360 camera but aren’t quite sure which one to get, well, you’ve come to the right place. I own every 360 camera released in the past two years and am ready to share my knowledge with you.

I’m going to take you through the best 360 cameras available in 2021 and by the end of this post you should have a clear idea which one is best for you. While there are nearly a dozen 360 cameras available right now I’m going to keep this list down to 5;  these represent the crème of the crop and the other cameras on the market are either not good enough to make the cut or are obsolete.

Whether you are on a tight budget or you are looking for the absolute best quality there will be a camera here suitable for you. Even if you don’t spot a camera here that you are interested in you can check out my ultimate 360 camera comparison table which has every 360 camera ever release in the past 4 years. 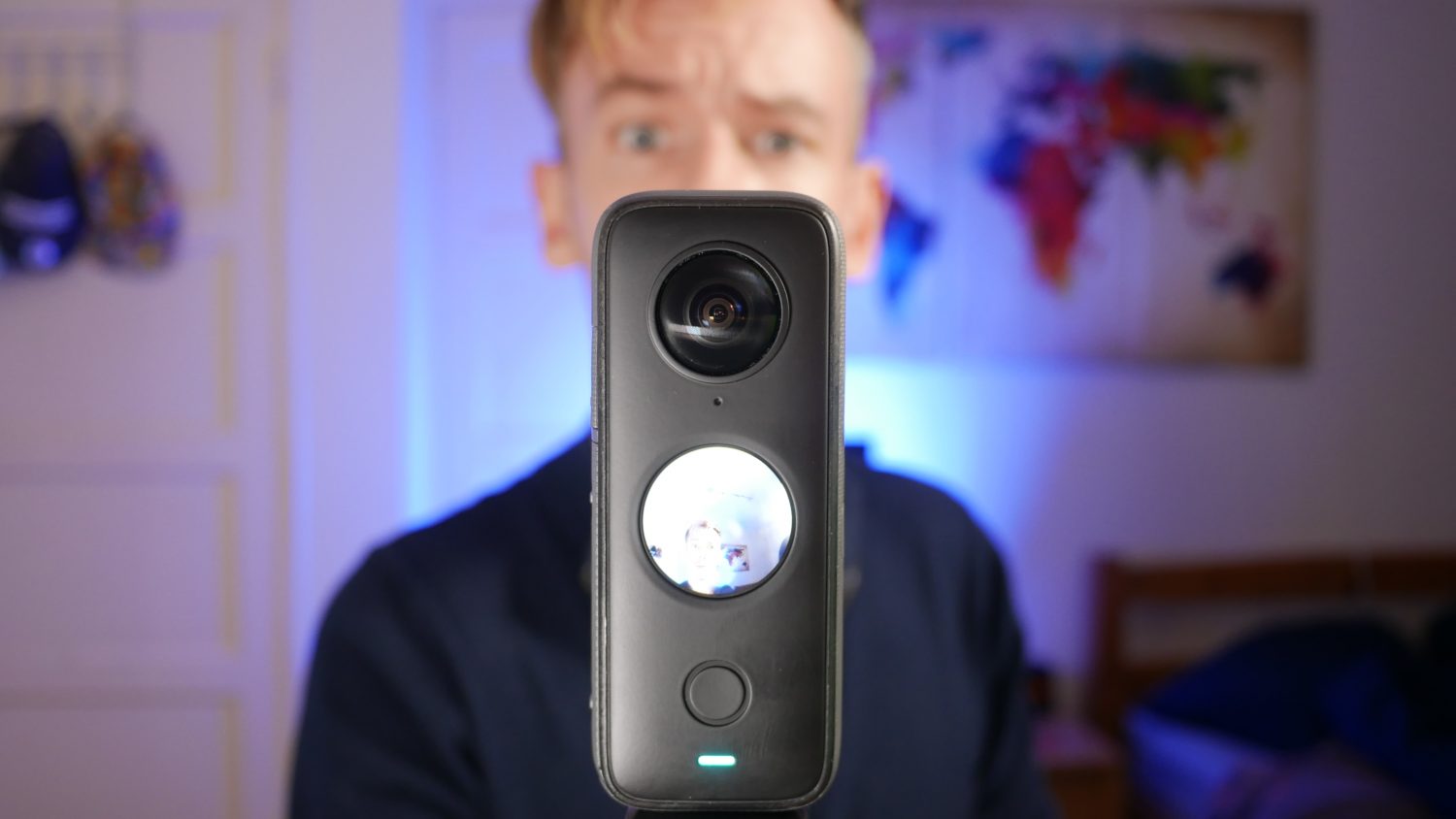 The Insta360 One X2 is my top choice for best 360 camera of 2021. The perfectly sized and shaped camera is great for all types of action shots. It can fit in places most other cameras can’t and features amazing stabilization for perfecting the most insane shots.

The touch screen makes the camera super easy to use and the editing app allows for easy cinematic video creation on the fly. It’s amazing the kind of shots you can get with the One X2 thanks to its size, shape, high resolution video, AI video editor and invisible selfie stick attachment. Check out my video review to see some of what it can do.

The One X2 also has decent photography capabilities including RAW shooting and auto HDR modes for instantly boosting image quality. The One X2 is certainly a triple threat camera when it comes to video, photos & design. It’s waterproof without a case and features a hardened plastic body with rubber grips.

The One X2 has a single lens shooting mode which allows you to mix 360 video and normal video using the same camera. Multiple frame rates are available as well as full manual control. 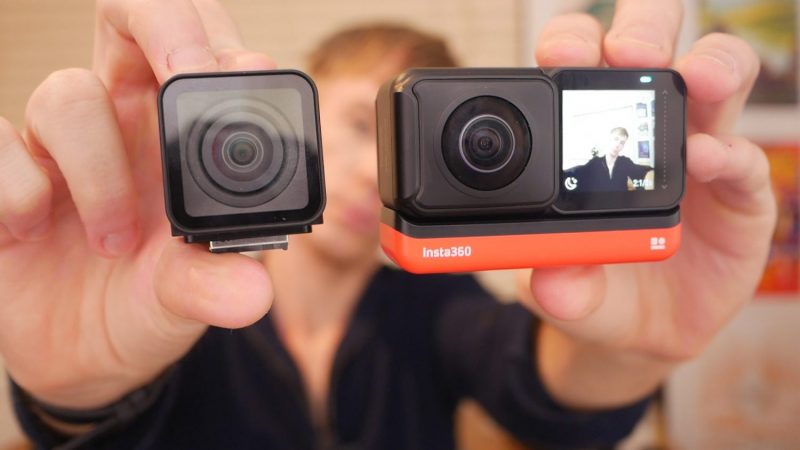 It’s another camera from Insta360 who have come to dominate the 360 camera market. The Insta360 One R is one of the most unique cameras I’ve ever used.. The One R is both a 5.7K 360 camera and a 4K action camera, it features a modular design which allows you to swap out lenses and change the functionality of the camera. it also features a 1 Inch Sensor addition which allows it to shoot higher quality video than other action cameras.

The One R is waterproof to 5m and features amazing stabilization software which makes it one of the best cameras ever for action shots, it also has multiple frame rate modes for slow motion shooting.

The One R App is the same as the One X2,  featuring AI editing, clip merging and color correction. You can create full length videos with multiple effects which would normally require a desktop editor to accomplish.

I’d recommend the One R if you are looking for an awesome 360 camera that can also switch to a “normal” action camera.

With the One R you essentially get two cameras in one and more modules are likely to be released in the future. The previous version of this camera quickly became the most popular ever and the One R looks set to build upon this success.

Insta360 One R
Modular camera. High quality 360 photos and video and amazing stabilization. A top choice for best 360 camera of 2021.
Buy from Insta360 Website
back to menu ↑ 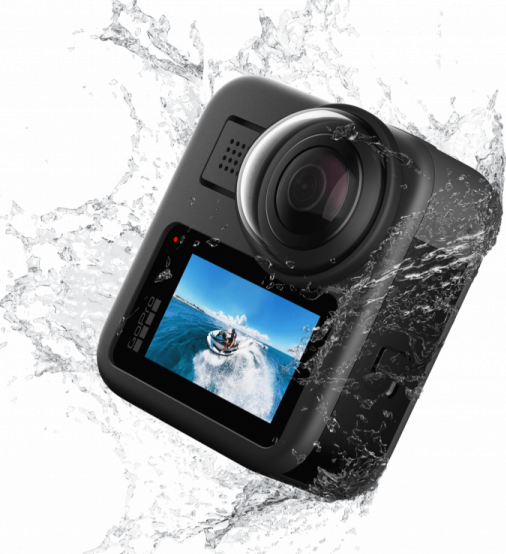 The GoPro Max is the second all in one 360 camera from GoPro and is one of their best ever cameras. The Max shoots some of the best quality 360 video I’ve ever seen thanks to their excellent lens, color and processing technology.

The Max is a 2 in 1 camera thanks to its Hero Mode which allows you to use just one lens to shoot normal linear video in 1440p.

What makes the Max an amazing camera for action shots is the epic stabilization technology combines with the shock and waterproof design. GoPro have made it extremely easy to reframe your videos on the go thanks to the intuitive app.

GoPro offer a huge range of accessories and most work with the Max, allowing you to attach your camera to anything from your car to a surfboard. The Max  features a total of 6 microphones on its body offering by far the best audio quality of any 360 camera out now; this makes the Max a perfect vlogging camera.

If you are looking for a camera to shoot fast moving and potentially hazardous video then I have to recommend the GoPro Max. GoPro Max
The top 360 action camera for 2021. Amazing stabilization and a well protected boy make this an awesome camera for any type of moving video.
Buy from Amazon
back to menu ↑ If you are looking for a semi-professional 360 camera for shooting virtual tours or any other kind of professional 360 photography then the Ricoh Theta Z1 is currently your best bet.

The Theta Z1 features two 1 Inch sensors in its lenses; three times larger than most other 360 cameras. The larger sensors allow for far superior quality images with excellent dynamic range and vivid colors.

Shooting with the Z1 is as easy as shooting with your phone allowing you create VR tours quickly and easily; there’s even a dedicated Lightroom Plugin for flawless stitching and editing.

While the Z1 is awesome at shooting photos it’s far less impressive when it comes to shooting video, with limited 4K resolution. Despite this the Z1 is one of the most advanced and impressive 360 cameras around, particularly if you want near professional quality 360 images for under $1000.

Ricoh Thea Z1
The best 360 camera for shooting high quality photos quickly and easily. Great for virtual tours, real estate and professional use.
Buy From Amazon
back to menu ↑ 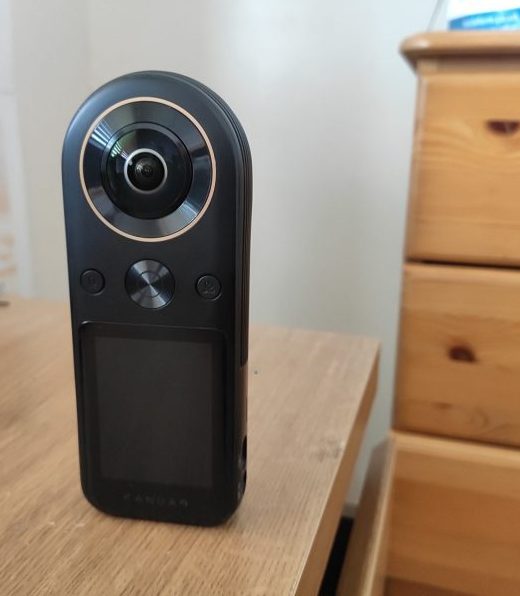 The QooCam 8K is the first 360 camera to offer 8K resolution for under $1000, in fact quite a lot under that figure. The QooCam is a revolutionary device that allows for super high quality 360 video in a small portable device.

Being able to shoot in 8K allows the QooCam to produce extremely sharp video which would have until recently only been possible with a very expensive professional setup. Video quality is boosted further by the including of 10bit color, allowing for millions of colors in every video, as well as slightly larger sensors than the competition.

The QooCam is perfect for shooting 360 video for viewing in a VR headset as that’s where the higher resolution will help keep the video looking as realistic as possible. You’ll also be able to reframe your video in 4K rather than 1080p as with other 360 cameras.

While the QooCam isn’t an action camera per-say, it does feature decent stabilization technology and can be used when attached to a vehicle, drone or selfie stick. You probably shouldn’t risk and extreme shots with this camera but it should work fine when moving at a decent pace.

With this being the first ever 8K 360 camera there have been some teething issues, particularly around desktop and mobile software. Make sure you have a powerful desktop to stitch your 8K video and don’t expect to get the best quality if editing only on your smartphone.

Despite some issues the QooCam is able to produce excellent quality video and has potential to be even better in the future once the kinks are ironed out.

If the above options are all a little too pricey for you then definitely check out the Insta360 One X. This is last years top 360 camera and it’s still one of the best around. Small, compact, easy to use and able to shoot great quality video, the One X is definitely the best value 360 camera money can buy.

The One X shoots similar quality video to the newer Insta360 One R, however unlike the One R the One X can’t shoot 4K linear video nor can it shoot as well in low light situations, it’s also not waterproof.

Other than these differences there isn’t much to miss if you choose the One X; you’ll get the same awesome App to edit your video and the quality in daytime is pretty much the same. You’ll also be able to shoot HDR video, HDR photos and DNG RAW images for maximum quality.

You’ll find the same shooting modes as well as the amazing software stabilisation found in the more modern One R. The One X has been used to create awesome action shots by thousands of content creators (including me!).

In some ways the One X is better than newer cameras, for example it’s very small size means stitching issues are less common when the software creates your final video. There is a reason the Insta360 One X is the most used, bought and talked about 360 camera ever and in many ways it’s still worth buying in 2021. Using the link below you’ll get a free invisible selfie stick too!

I said I’d keep this list of 360 cameras in 2021 down to five, and the cameras above do constitute your best options right now. Having said that there are several other 360 cameras available, some with unique features you might be interested in. Let’s take a quick look at them now 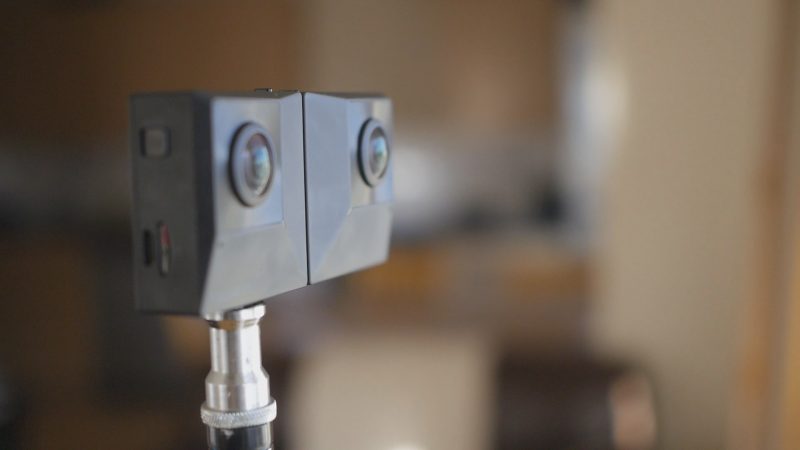 VR 180 Cameras are able to use two side by side lenses to shoot 3D 180 degree video. While this doesn’t give the same full 360 experience it does allow you to shoot 3D effects which look awesome when viewed in a VR headset. The format is very niche and not a huge number of people are shooting in 180, but as the number of VR headsets sold grows so does the demand for this type of video. The EVO can also transform into a 360 camera thanks to its movable body so you are not stuck shooting in just the 180 format. If you are looking for a professional 360 camera then the Insta360 Pro 2 has established itself as the VR workhorse in many studios around the world. The high quality video and relatively easy to use hardware makes the Pro 2 the preferred camera for shooting pro-level video. Insta360 have also develop a workflow which should help speed up the slow process of editing high quality VR video; a special Premiere Pro plugin allows you to edit proxy files then apply all the effects during the final rendering process.

The Pro 2 is an expensive piece of kit but it still ranks highly among VR creators. If you are looking to move into shooting high quality 360 video with professional production values then the pro 2 is the first camera to consider.