What’s the Best 360 Camera for Cyclists and Motorbikes? [Buying Guide]

360 cameras provide a whole new way to shoot video thanks to their epic stabilization and ability to capture everything around you at once. For cyclists and motorcyclists this is a great opportunity to create some amazing video that wouldn’t be possible with other cameras. Even if you just want to capture your commute to work, 360 cameras will never miss a thing that happens around you for the entire time you are recording.

With 360 cameras you can record first and point later with easy to use software; it’s like having a camera crew attached to your bike. In this post we are going to go through the top 360 cameras for bikes, both motored and not. We will be looking at video quality, stabilization and any extra features that set them apart.

Best 360 Cameras for Cyclists and Motorbikes

The latest and greatest 360 camera from the top action camera company. The GoPro Max features next generation stabilization which will keep your videos looking super smooth regardless of how fast you are going and how main hair-pin turns you take.

What makes the GoPro Max the best 360 camera for your motorbike is that it has two distinct shooting modes. 360 mode capture the whole environment around you and allows you to shoot first and point later. Hero Mode uses just one lens like a normal camera, but features the same awesome stabilization. The Global Lock feature is perfect for bikes and has been used to awesome effect.

The Max also features the highest quality 360 video for a camera under $800. You’ll also find the app very easy to use for editing and uploading; but for any advanced editing you’ll need a paid program like Premiere Pro.

Available on Amazon back to menu ↑ 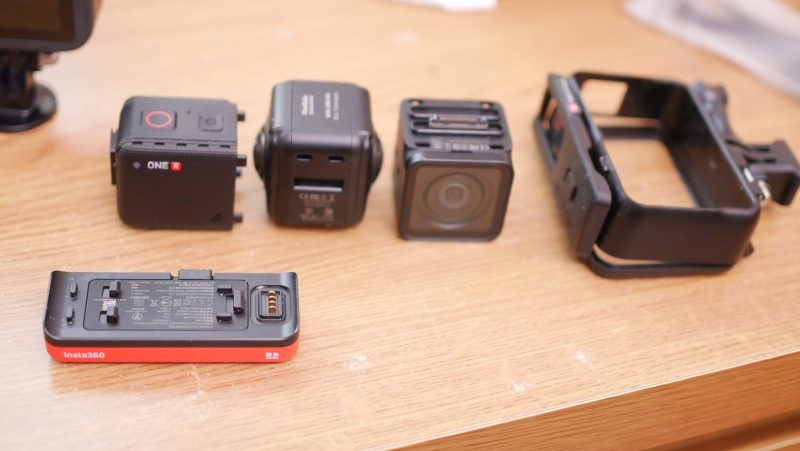 This modular 360 camera is a top contender for recording your bike shots. For many people this may actually be the best option as it can not only record high quality 360 video but 5K “normal” video too.

The modular device allows you to take the camera apart and quickly plug in a different lens. there are three lenses available right now, one of which is a 360 lens, another a 4K action lens and finally a 1-Inch sensors high quality lens.

If you don’t want to limit yourself to just 360 video and also want GoPro Hero quality shots too then the One R is the camera for you. It also features some of the best camera stabilization ever and a whole host of shooting options, frame rates and accessories.

If the GoPro Max seems a bit limited to you then the One R is the better but more expensive option. You’ll also have to get used to taking the camera apart every time you wan to switch between 360 and non 360 video, which can be a bit frustrating.

Available From Insta360 back to menu ↑ 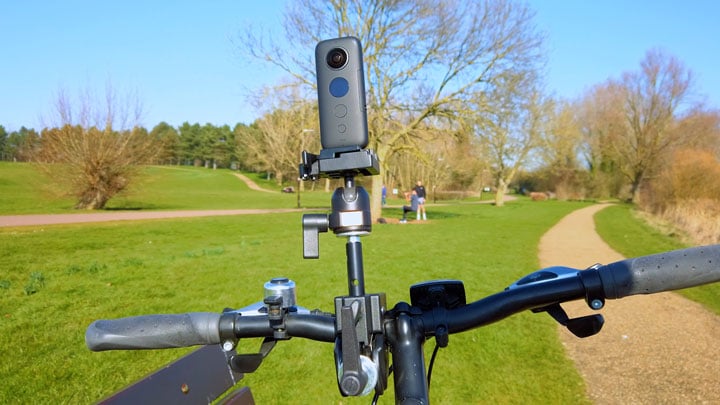 Probably the best overall 360 camera for bikes. The Insta360 One X has the best stabilization of any 360 camera so it can take any kind of knock and vibrations that your travels will put it through. The video quality is also very good at 5.7K so you’ll be able to capture fine details.

Be aware that 360 cameras won’t capture video at a quality you are used to with other action cameras, but the One X isn’t far off. You’ll be happy to hear that the One X has a whole host of accessories and mounts for attaching to your bike or helmet, in fact there is a dedicated Bike Bundle which includes everything you need. Check out this footage shot with the One X and a mountain bike:

The One X also has an amazing app for creating cinematic video; you can create timelapses, panoramas and hyperlapses in just a few minutes. Take a look at this video fron YouTuber Mike on Bikes who shows you how easy it is to edit your One X video

The downsides of the One X is its lack of weather or water resistance, however you can get a waterproof case. This case may slightly affect the video quality so its not a perfect solution.

The One X is one of the cheaper 360 cameras and there are loads of people using it so you won’t have any trouble finding tutorials or help using it online, but you’ll likely pick it up with about 30 minutes of practice. You can get the One X from their official website and if you use this link and you’ll get a free invisible selfie stick. 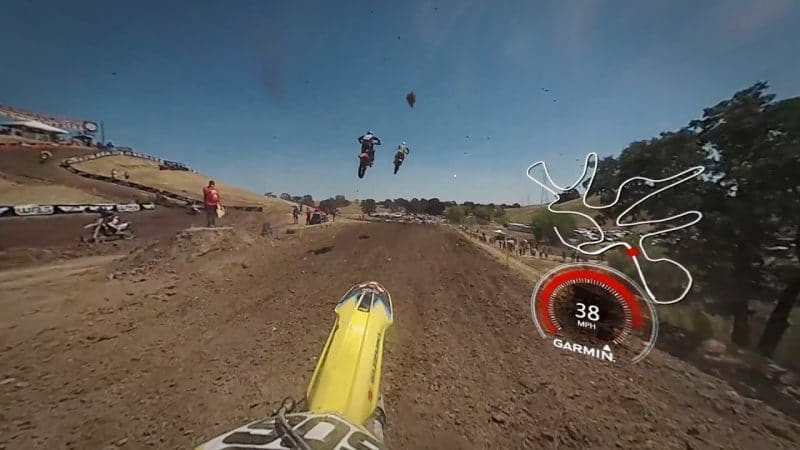 The VIRB 360 is the first full 360 action camera and it’s practically perfectly designed to be used for bikes. The VIRB 360 is waterproof, shock proof and dust proof, it has replaceable lenses and a whole host of sensors. Garmin are one of the top action camera producers and they have put all their experience into the VIRB.

Probably the best feature of this camera is how it tracks pretty much everything you do, from your speed to elevation and even air pressure.

The data collected by these half dozen sensors can then be displayed as an overlay on your video, this provides a kind of heads up display on your 360 video. Garmin calls this G-Metrix and it’s one of the reasons why Motocross chose Garmin as their supplier of cameras and why the VIRB 360 is used for nearly all their races.

The VIRB also has amazing 6 Axis stabilization technology which keeps the video looking smooth regardless of what you put it through. Take a look at this motocross race shot with the VIRB to see how it deals with the jumps and hard turns.

The stabilization isn’t quite as good at the One X but the VIRB makes up for this with its rugged design which protects it from being easily damaged like most other cameras would be in this situation. The VIRB is more suited to shooting 360 video for VR such as in the video above.

Other cameras like the One X and Rylo (see below) are more suited to creating standard flat video by editing 360 video, although all cameras are capable of both.

The video resolution is quite high at 5.7K but the quality isn’t as good as some other cameras on this list. On a clear bright day you probably wouldn’t notice much difference anyway. The VIRB 360 is the most expensive camera on this list, this is most likely due to its unique design and the many sensors it holds. Check th latest price by clicking the button below. 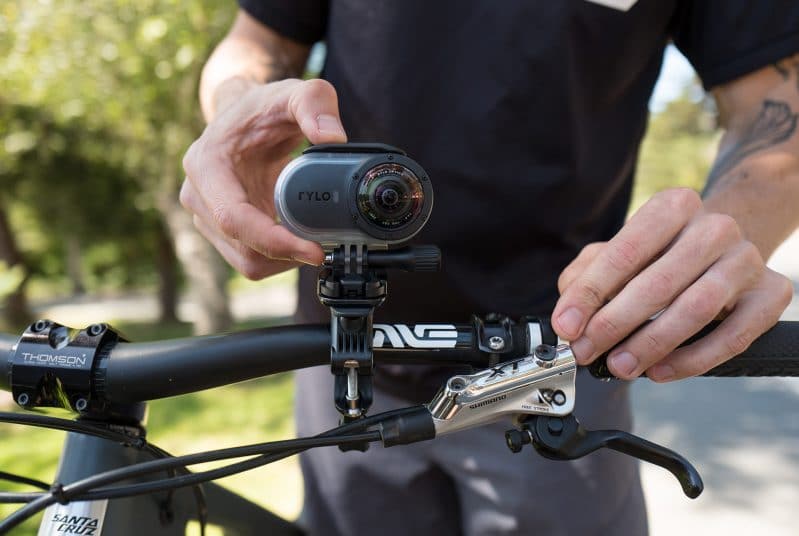 The Rylo is another small, compact and easy to use 360 camera with amazing stabilisation technology. Like the Insta360 One X the Rylo has an app which allows you to edit your 360 video into a flat video. You can create smooth panning motions, tiny planets and even track specific objects.

The video resolution is the highest yet at 5.8K so you should get a pretty sharp video out of it. The stabilizaiton is up there with the best and the camera is compatible with all GoPro mounts. Take a look at DC Rainmakers video shot with the Rylo as he cycles around Paris:

He makes clear from the start that he’s not touching the camera and all movement and tracking is done in post production with the app. The Rylo has the easiest to use app to achieve this effect and even someone with basic editing experience should pick it up fast. Unfortunately the Rylo isn’t waterproof or shock proof so it may not be suitable for action shots which put it in danger of breaking, but for casual cycling and motorcyclists it should be a top contender.

If this is your first time using a 360 camera (or even just thinking about it) the you may be concerned that the process is difficult, but the reality is that 360 cameras are easier to use than pretty much any other set up. All you need to do it find the right mount for your bike or helmet, start shooting and go. The best thing about 360 cameras is that it doesn’t matter where they are pointing or if they move because they’ll always capture everything around them.

The more complicated part comes after you’ve shot and you want to edit. Depending on which camera you get you’ll likely need to stitch your video, which is basically combining the video from both lenses into a single video. This is done with an app or desktop software provided by the camera company and it’s just a matter of dragging, dropping and waiting.

Where to look next?

If you are still not convinced or are a bit confused you can check out my YouTube channel where I have over a hundred videos showing you how to use 360 cameras. You can also check full reviews of all the cameras listed here:

Which 360 Cameras Work With Matterport?