Mi Sphere vs VIRB 360 vs Gear 360: Video and Photo Comparison

It’s time for the ultimate 360 camera showdown. These three devices are probably the most popular 360 “prosumer” cameras out right now. They are powerful but relatively cheap, designed for those who want to shoot excellent quality 360 content without spending thousands. Up for contention is the Xiaomi Mijia Mi Sphere vs the Samsung Gear 360 2017 vs the Garmin VIRB 360; each has their strengths and weaknesses, but I’m going to focus solely on 360 video and photo quality in this comparison.

Let’s take a look at the full set of specifications for all three cameras side by side. These are a good indicator of what each camera can do, but remember resolution isn’t anything.

As you can see all three cameras are completely different, primarily because they are all trying to accomplish different things. The VIRB 360 is an action camera packed with sensors and a tough outer casing. The Gear 360 is designed to be a mass market product; easy to use and cheap. The Mi Sphere is somewhere in the middle. Whilse video and photo quality is of course a hugely important factor in choosing a 360 camera, you’ll also need to consider what you are going to use the camera for and of course the your budget. 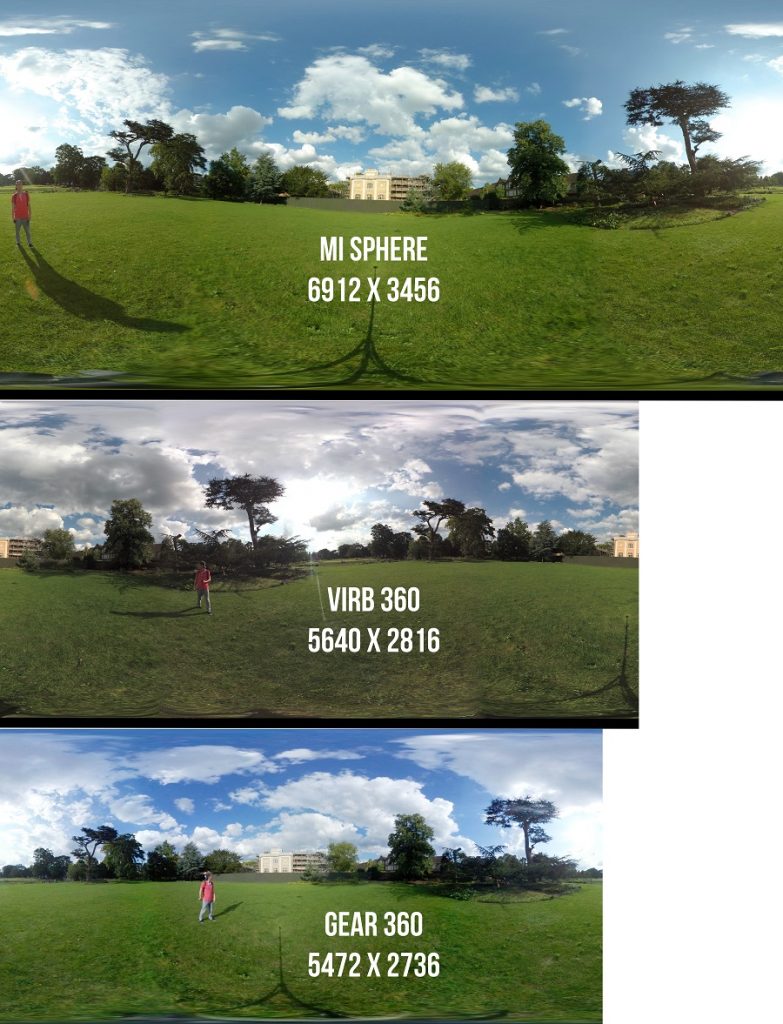 I created this all in one flat image that lets you compare the image quality from all three cameras easily.  Here’s what I think about the quality of each image:

Xiaomi Mijia Mi Sphere (check price): The flat image shows us that the Mi Sphere produces the largest 360 stills, which usually helps in creating sharper 360 images. I’m impressed with the overall quality of the image, with little over-saturation and only a slight amount of flaring from the sunlight. The only issue I see is that some highlights are slightly blown out (see the building in the center). Details are captured beautifully and this is definitely on of the top consumer 360 cameras for photography.

VIRB 360 (check price): The VIRB 360’s strength’s lie in video, however the stills it produces aren’t too bad. In this comparison you can see a clear difference in color between the VIRB the other cameras, and the VIRB gets it right the most. While it lacks the higher resolution, the VIRB can produce accurate and highly detailed 360 photos, although it does struggle somewhat with direct sunlight.

Gear 360 (check price): Significantly smaller in resolution than the Mi Sphere, the Gear 360’s still images suffer from a lack of detail and over-saturation. While it can produce great 360 images in the right conditions, I think the Gear 360 is probably the loser of this particular comparison.

I combined all three photos into a single 360 image so you can look around and compare each image in 360 format, as it’s meant to be seen.

Let’s move onto a video comparison between the Mi Sphere, Gear 360 2017 and VIRB 360. To compare the video quality of these camera I shot a 360 video with each of them in the same location, then overlayed them in a single video. I also combined all three videos into a single 360 video so you can look around and see the quality difference instantly.

Xiaomi Mijia Mi Sphere: Even though it has the lowest video resolution of the three cameras, the Mi Sphere still produces 360 video that matches and even beats its competitors. The Mi Sphere manages to not overexpose highlights too much and capture vibrant colors. It struggles with direct sunlight, but manual controls can allow you to underexpose to deal with this. The Mi Sphere also comes with video stabilization, which wasn’t necessary for this video but still very important.

VIRB 360: Undoubtedly the best performer in terms of video. The VIRB shoots at the highest resolution but also has the better optics, resulting in clear, detailed and accurate 360 video. Notice how different the colors are in the VIRB video, this is actually truer to reality than the rather saturated coloring of the Mi Sphere and Gear 360. The time-lapse shot with the VIRB is particularly impressive and produced an excellent video.

Gear 360: The video shot with the Gear 360 in this comparison appears slightly bland and washed out, with many details blurred. Look at how the appearance of the building differs between each of the three cameras and you’ll see that the Gear captures the least amount of detail and color differences. While the  Gear struggles to match up to its competitors, remember that it’s by far the cheapest and easiest 360 camera to use. 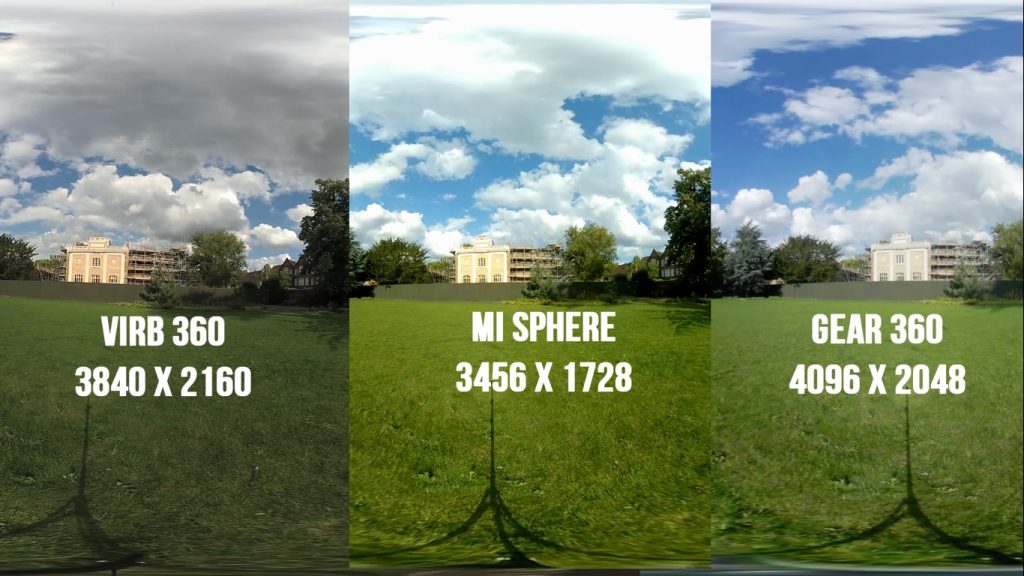 Here is a flat screenshot of the combined videos from each camera. You can see even more clearly here the difference between each one, this is mostly due to the optics used inside the lenses of each camera.

What surprised me most about this test is how well the Mi Sphere performed; as this was the first time I used this camera and I was unaware of what it could do. I was sceptical due to its lower video resolution, but it proved to be the standout in many tests. Overall I think the VIRB shoots the best quality 360 video and the Mi Sphere can shoot the best 360 stills. The Gear 360 is the cheapest and easiest to use, the VIRB is very expensive and suffers from software bugs and the Mi Sphere is averagely user friendly with some room for improvement. I can’t really tell you which one is best for you, but I hope this comparison has made the capabilities of each camera clearer.

Mi Sphere is available from Gearbest, which ships to over 200 countries

The Gear 360 is cheapest on Amazon

The VIRB 360 is also available on Amazon