VR180 is an emerging video format that provides higher quality but less immersive alternative to 360 video. The VR180 format is exactly what the name suggests, video shot at a 180 degree field of view that you can watch on a VR headset. Humans have a natural field of view of about 140 degrees, so shooting in VR 180 is like capturing everything the human eye would see plus a little bit extra on either side.

VR 180 offers an easier workflow and higher quality video compared to shooting in 360. A camera that shoots 5.7K resolution video in 180 degrees is going to look better than a camera shooting 5.7K video in 360 degrees, this is because the same number of pixels only need to fill half the space. The down side of course is that you only capture what is in front of the camera, not everything surrounding it. In some situations this might actually be preferable, such as filming a concert, football match, or any event/scene where the points of interest are confined to a specific area.

Yes! Just like 360 video you can view 180 video on VR headsets like the Oculus Go or Samsung Gear VR. In fact VR 180 video is likely to look sharper and higher quality when viewed back on a VR headset compared to full 360. Another advantage that VR 180 has is that all cameras that shoot VR180 also shoot in 3D, which actually looks really good on a VR headset. There are only a few 360 camera that can shoot in 3D and they are all very expensive. 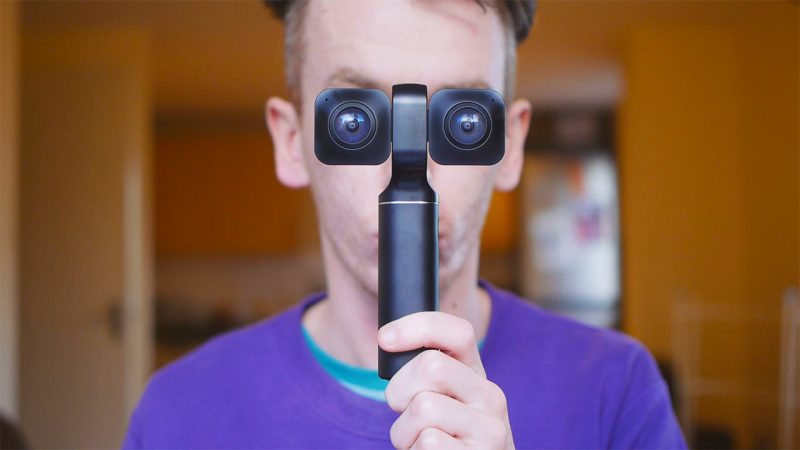 The Vuze XR is a dual 180 and 360 camera, giving you the best of both worlds. The camera can change between the two modes at the touch of a button, which causes the two lenses to flip out. In 180 mode the Vuze XR can shoot 180 video in 3D at 5.7K. This is one of the highest resolution 180 cameras out right now and the video quality is great. You can also shoot 4K video at 60fps for slow motion. There are some issues with stitching lines in 360 mode as well as stabilization when moving, but overall this is a very high quality camera that can produce some of the best looking VR180 video I’ve seen from a consumer camera.

Right now the Vuze XR is the camera I would suggest to anyone who wants to start shooting VR180 video. 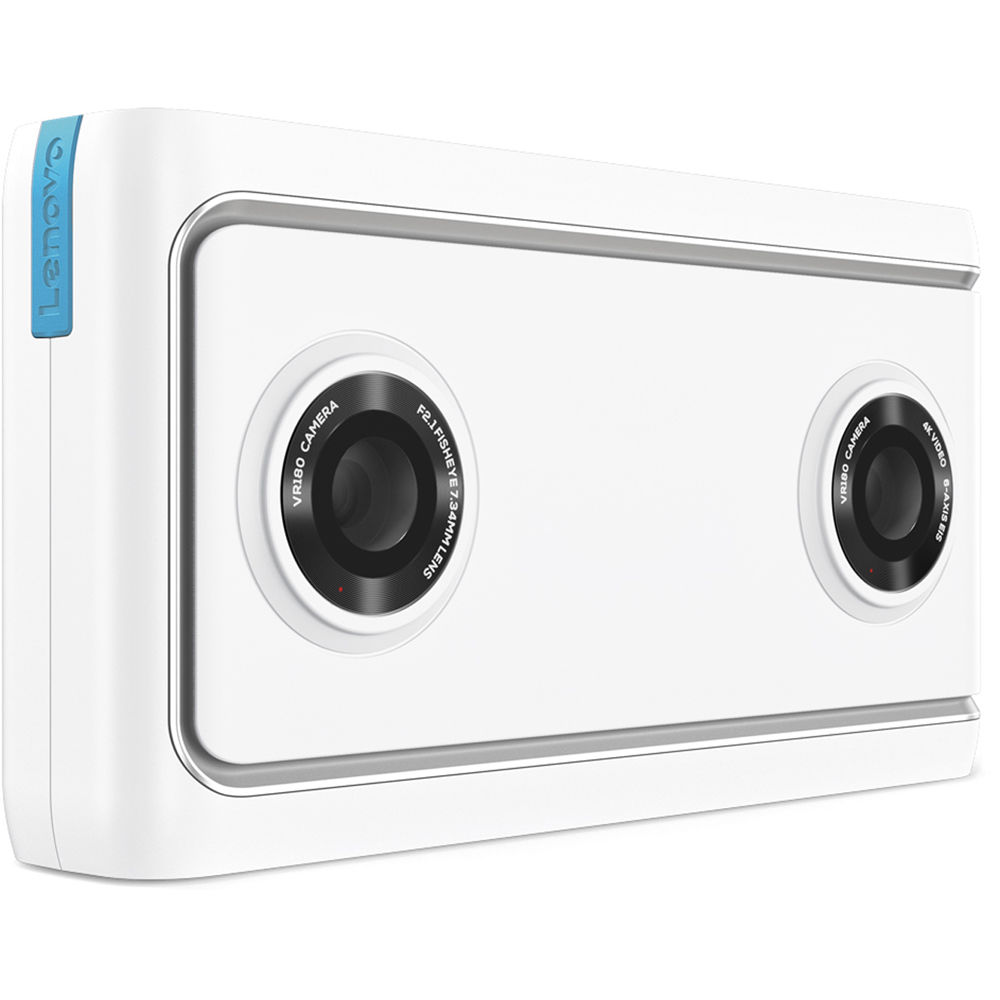 The Lenovo Mirage was the first camera released specifically for the VR 180 format. It’s a tiny camera with two side by side lenses that shoot 4K 180 video in 3D. The Mirage is designed to be as easy to use as possible; a goal that it achieves. Using the Mirage is as easy as using your phone or a digital camera, however this comes with some sacrifices. Unlike some other VR180 cameras the Mirage has no stabilization feature nor can it shoot photos. The Mirage is currently the cheapest VR 180 camera available right now (in the US at least), so if you want to get started with VR 180 at the lowest price possible then the Mirage could be worth a look. 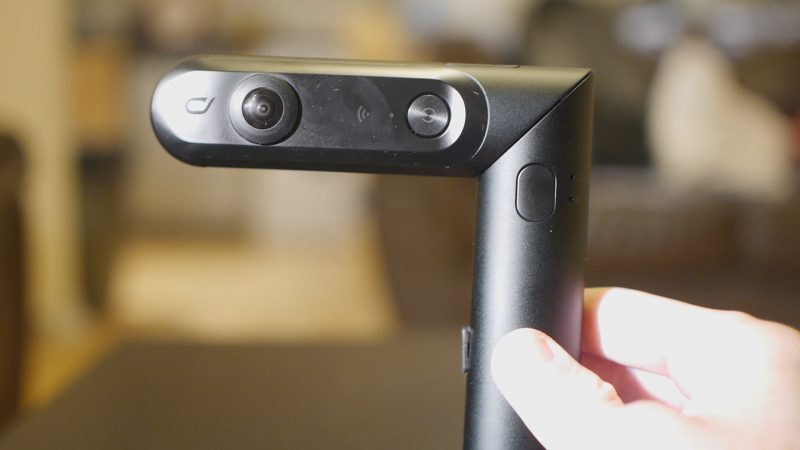 This is another dual 180 & 360 camera which can change the position of its three lenses by rotating the body. The Qoocam can shoot video at a resolution of 4K at 30fps in both 360 and 180 modes. Other resolution options include 4K at 60fps and 3K at 120fps for a slow motion effect. The video quality is reasonably good, however when viewed on a VR headset 4K resolution can seem a bit blurry. The in built stabilization is excellent and you can confidently shoot with the Qoocam while moving. The Qoocam also comes with depth mapping and background re-focusing, neither of which works 100% of the time but they are nice features to play around with sometimes. 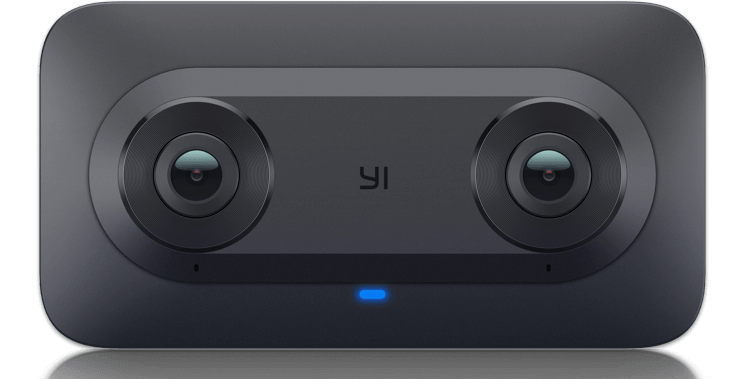 The Yi Horizon is an unreleased VR180 camera with 5K video capabilities. The Horizon was announced at the start of 2018, but we’ve heard precious little about it since. It may be that Yi has abandoned the product, but just incase it is released one day let’s take a look at it. The Yi Horizon is a dedicated 180 camera that can shoot 5.7K VR180 video. I can’t comment on the video quality as it’s not been released yet, but Yi have a good reputation for creating high quality cameras at relatively low prices. I’ll update this page if a release date for the Yi Horizon is ever announced. 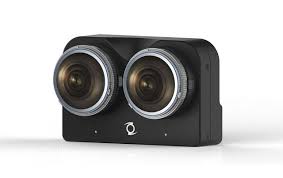 The Z-Cam K1 Pro is a professional 180VR camera that’s capable of shooting super high quality 180 video. This camera is significantly more expensive than all the others on this list, mostly because it utilises micro 4/3 lenses to create its video. The difference in quality is huge and the resulting  video will look like it was shot with a DSLR. You’ll only consider this camera if you are interested in shooting professional quality video for VR headsets.