I’ve had the new Gear 360 (2017) for a few days now, long enough to compare the video and photo quality with my old Gear 360. I went out to my local park, armed with my two Samsung 360 cameras, and took some 360 photos and videos with each of them in the same position with the same settings. The reults are shown below, I’ll let you have a look at them before I go into any analysis.

Lets start with a comparison of the 360 photos. The old gear 360 can shoot 30 megapixel photos, however the 2017 gear 360 can only shoot 15 megapixel; this is why they are a different size in the flat image comparison.

(Please ignore the fact that I left the “n” out of “original” in every single image! Just goes to show you shouldn’t always copy and paste without checking!) 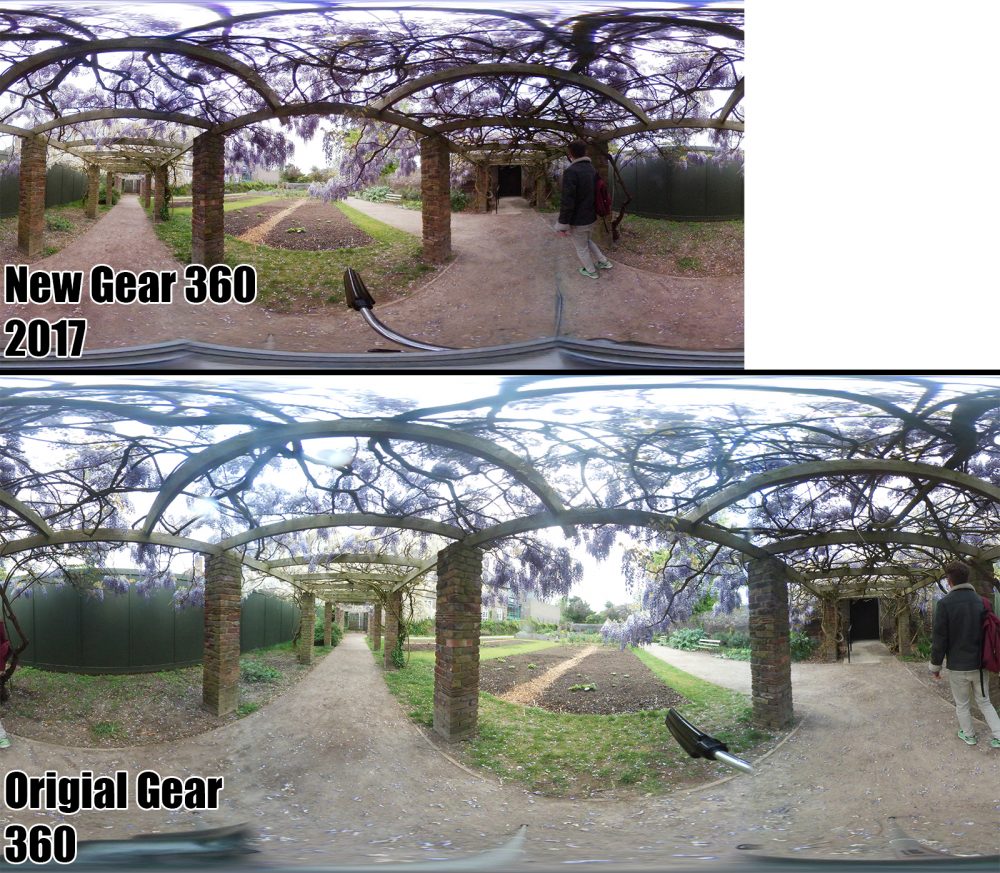 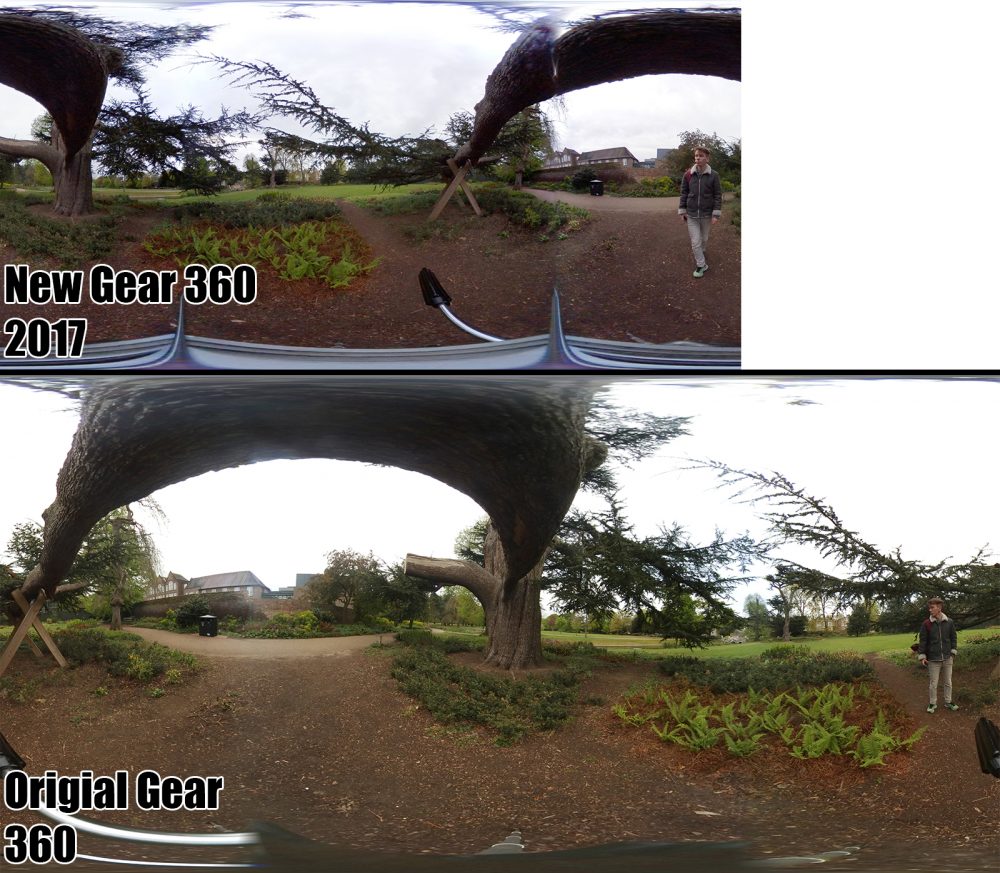 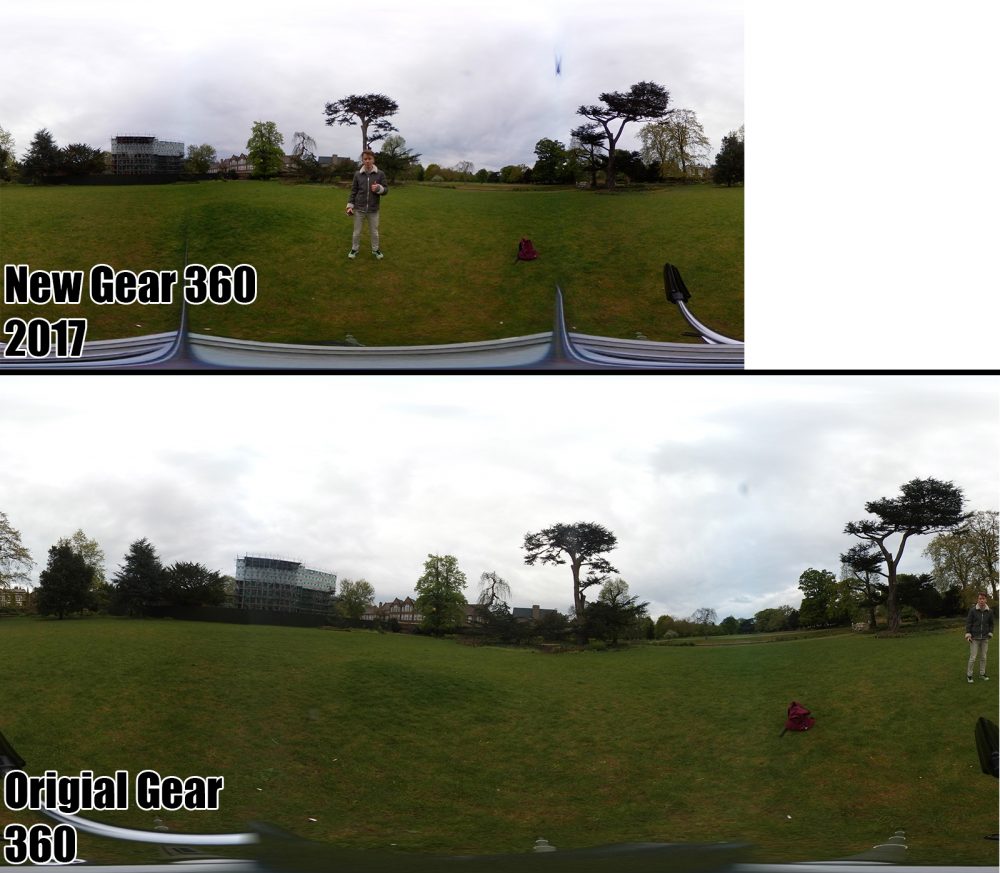 These images were stitched using the action director and both cameras were set to maximum resolution with 800 ISO and automatic light balance.

Now lets take a look at the same images in 360 format:

After looking at both the flat images and the 360 images from both cameras, I can only conclude that the old Gear 360 takes better 360 photos when compared to the 2017 version. This isn’t too surprising to be honest, as soon as I saw that the new Gear 360 would cut the resolution by 15 megapixel, I had little hope that they could improve on the overall quality.

If you look at the 360 images you’ll notice a kind of fuzziness, this is caused by the low resolution being stretched over 360 degrees. Never the less, the new Gear 360 does improve on color balance and saturation, making the images feel more vivid, it’s just a shame Samsung couldn’t have kept the same resolution. OK, onto video…

For the video comparison, I took video shot with both cameras and put them side by side in a non 360 video. This should allow you to compare the subtle differences in video quality more easily. I’ve also uploaded video in the 360 format from both cameras, so you can see how it looks.

I think it’s pretty clear the the New Gear 360 shoots higher quality 360 video compared to the older version. The bump in resolution, while not massive, is noticeable and results in a sharper image. Colors are more vivid in the video shot with the 2017 Gear 360 and the white balance is improved. You may notice that parts of the video are occasionally moving in the footage shot with the 2017 Gear 360, it seems like the camera tyies to automatically correct stitching errors by moving parts of the image, whether this turns out to be an advantage or an annoyance remains to be seen

I’m going to continue using the new Gear 360 for a few more days before I write up a full review. In the mean time, you can check out a full specification comparison between the two cameras or see some more footage show with the New Gear 360 on my YouTube channel.

If you already know you want to buy the new Gear 360, it’s now available on Amazon.com