The two latest VR headsets from industry leaders Oculus have been released, now it’s time to pit them against each other. The Oculus Quest is being lauded as the first wireless VR gaming machine, able to provide a tether free VR experience that many have been longing for. The Oculus Rift S is an improvement upon the original Rift and brings new tracking technology and an improved screen, albeit with the requirement for a gaming laptop.  VR has come a long way in the past few years and there are more options than ever so which of these headsets will be best for you, or is there another option out there? Lets find out as we compare the Oculus Quest and Oculus Rift S.

It’s what you are going to be staring directly into at a very close distance, so you want your VR headsets screen to be sharp, crisp and high resolution. The two headsets utilise different screen technologies which both have their strengths and weaknesses and the jury is out as to which one is “better”. The Oculus Quest features a dual OLED screen with a total resolution  2,880 × 1,600 (1280×1440 per eye), this is among the highest resolution screens of any VR headset in this price range. The Rift S screen is based on fast twitch LCD technology which some people consider superior for its ability to reduce the dreaded screen door effect which allows you to see individual pixels, however an OLED screen it likely to display deeper blacks and more vivid colours.

There’s no denying that the Oculus Quest has a higher resolution screen and may therefore be able to display a slightly sharper image, especially when watching videos or reading text. Don’t expect a better gaming experience just because of a higher resolution screen however, that is more dependent on computing power which I’ll talk about later. I should also mention the higher refresh rate on the Rift S, an often under appreciated metric, which will allow the headset to display smoother moving images which playing games.

Both headsets feature identical tracking technology newly developed by Oculus which does away with the need for external cameras; instead the cameras are embedded in the headset itself (all of them) and infrared is used to track the room you are in as well as the two controllers (also identical on both headsets). This is a great innovation and means there is one less accessory to set up to start your VR experience 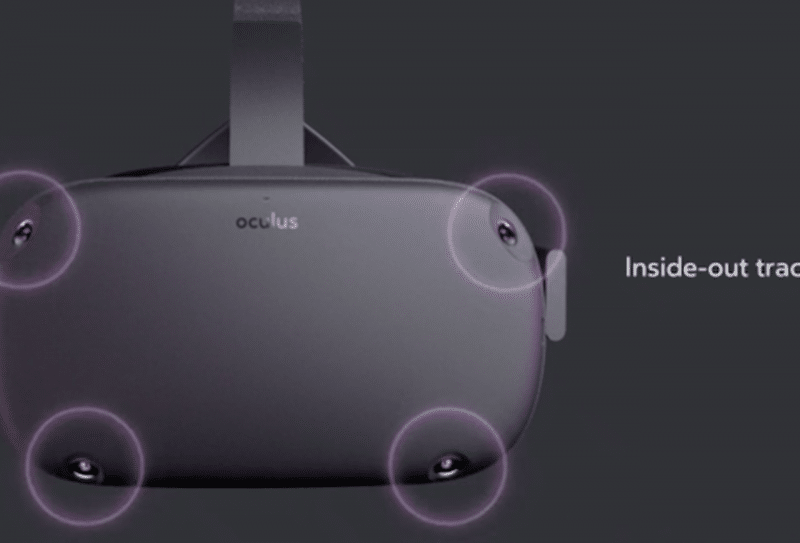 The tracking and controllers for both headsets allows for 6 degrees of freedom (6DOF) which means you can move around the VR environment freely (just watch out for your real life furniture). The tracking should work to room scale in the average living room or bedroom and is best used in a well lit environment. 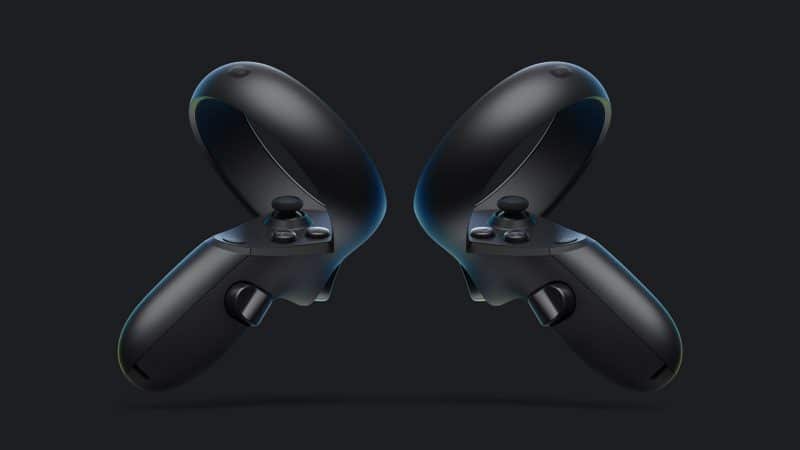 Each controllers features an analogue stick, two triggers, a menu button and two face buttons. They are ergonomically designed to be used effectively without having to actually see them. In the VR environment they could be represented as a paintbrush, gun, tool kit, anything the gaming world requires. The Rift S has one extra tracking sensor than the Quest, so you can expect a slightly more accurate experience with that headset.

Tether or not to Tether?

This is where the biggest and most important difference between the two headsets becomes apparent. The Quest is Oculus’s first wireless headset, requiring no PC or laptop and therefore no wires. Being able to experience full 6DOF VR experiences without any wires is nothing short of a revolution in VR technology, perhaps as big as the original iPhone was for smartphones. Wires have been a constant intrusion when playing VR games and could often limit your movements and freedom to act in the VR world. 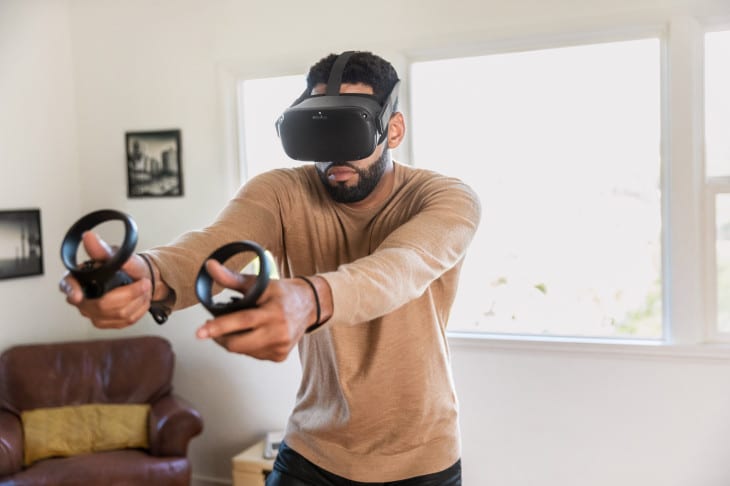 Tethering your headset to a gaming laptop does come with some advantages, primarily the ability to display far superior graphics. While the Rift S will still require a tethered connected to a PC to play it will be able to render much better textures and details than the Quest. Essentially the games on the Rift S are always going to look uch better than on the Quest, and in a VR environment this does matter. The Oculus Quest is powered by a Snapdragon 835 mobile processor which is the same processor found in the Samsung S8. This is already a fairly out of date processor and in a few years it may seem positively ancient. It’s only thanks to the huge amount of research and optimisation that Oculus/Facebook put into the Quest that it can even run VR games at all. Compared to the power of a PC or Laptop it’s never going to win, but that might not matter to many people.

You’ll have to decide which is more important to you, a VR experience free of wires or a VR experience with the best visuals. For me I think I’d prefer the wireless experience even though I do have a VR ready laptop.

Here’s where you’ll find the other glaring difference between the two headsets, and it’s one where the Rift S comes out on top. The Rift S will have access to the full gaming library of the Oculus Store which has had years to build up titles and experiences, it will also be able to play most of the games developed for the Quest as well. The Ques ton the other hand just isn’t powerful enough to play all the games developed for its more powerful counterparts.

There will be some ports (like Beat Saber and Superhot) but expect a lower quality visual experience. The Quest does launch with some interesting exclusives which will be more than enough to keep even the most avid VR gamer busy for months, and don’t forget the huge library of 360 videos and other VR experiences which will also be available on the Quest.

Simply put, the Rift will be able to play all Quest games but the Quest will only be able to play some Rift games. Obviously as time goes on the library will expand and I’m sure developers will be keen to create experiences that work on both headsets.

Both the Oculus Quest and Oculus Rift S are available for $399 and $499 for the 64GB and 128GB versions respectively. In the UK the price is the same in £. Remember though that the Rift S requires a reasonably powerful PC with at least 8GB or RAM and a dedicated graphics card, whereas the Quest is ready to go straight away.

Both systems have been hotly anticipated and reviews from customers and other tech websites have been flooding in. I’ve read a lot of these reviews so if you want to save some time here’s a summary of the most common pro’s and con’s for both headsets.

The Oculus Quest currently has an impressive 5 star rating on Amazon with several dozen long form reviews from customers whereas the Rift S has a 4 star rating with less reviews, likely because of its higher requirements. It seems that the Rift S is attracting owners of the original Rift who are seeking an upgrade whereas the Quest is attractive those who are new to VR or have maybe owned an Oculus Go.

With these two reasonably low prices VR headsets it seems to me like Oculus is taking the lead in the VR race. As for which one you should buy, well that depends entirely if you are more attracted to the idea of wireless VR or graphically impressive VR. That’s really the defining different between these two. I would say that if you are looking for your first VR headset then the go for the Quest because the experience alone will be enough to keep you entertained.