Vlogging is as widespread as ever and with the popularity of 360 cameras increasing rapidly, both new and old vloggers are looking at using 360 video in their vlogs to create an immersive experience for their audience. Both Facebook and YouTube enabled 360 video on their platforms, many of which already have millions of views.

So things brings up to the question, which 360 camera is best for vlogging? A vlogger who wants to shoot in 360 will likely want a camera that’s easy to use, not super expensive and can shoot good quality 360 videos. Thankfully there are more than a few camera options that fit into all these categories.

What to look out for when buying a 360 camera

First thing’s first, 360 cameras are not like normal digital cameras or DSLR’s. There are a few things you need to think about when buying a 360 camera that you wouldn’t need to worry about with a normal camera. Let me break it down for you:

You are going to want to find a 360 camera that has the highest resolution possible. You will probably know that the common HD resolution is 1980 x 1080, which is perfectly fine for most normal cameras, but not for 360 cameras. 360 video and photos require much larger resolutions because the image is wrapped all the way around the camera in 360 degrees, where as a normal camera shoots at around 100 degrees. Look out for 360 cameras which feature 3K or 4K resolution, this should be enough for decent looking footage.

360 cameras often have more than 1 lens facing opposite directions; when you shoot a 360 video or photo these lenses work individually. Once you are done the image from both lenses are stitched together to create the final 360 image; sometimes the stitching can be visible in the final image as an area of blurriness. Always check an example video shot with the camera you are considering to see how visible the stitching is.

One of the most popular 360 cameras is the Samsung Gear 360, mostly thanks to its 4K video resolution and low price. The Gear 360 can shoot excellent quality 4K 360 video, which is considered the desired resolution for good quality 360 video. Not only that, but the Gear 360 can also live stream 360 video to Facebook and YouTube, albeit at a lower resolution.

The Gear 360 is designed to be hand held, however it has a tripod mount that you can also attach a selfie stick to. You connect to your phone via the Gear 360 app where you can also share your 360 video and photos to social media right after you’ve taken them. One of my favorite features of the Gear 360 is the time-lapse feature (see video below), which I often use in my own vlog.

Why it’s good for vlogging: It’s small, very easy to use and shoots great quality video. You can live stream from the dedicated app within seconds of firing it up and sharing/uploading your 360 content on social media is handled beautifully.

The Gear 360 camera is only fully compatible with Samsung smartphones, however you you can also use it with iPhone minus the Lives stream feature. At just over $200 this is one of the best value for money 360 camera out right now, and certainly the cheapest that can shoot in 4K.

There is also an older version of the Gear 360 that shoots poorer 360 video,  but slightly better photos. It’s also cheaper!

The Ricoh Theta S is probably the best all round 360 camera for vloggers. It’s super easy to use, compatible with both android and iPhones, can shoot full 360 photos and video and is prices under $300. Ricoh were one of the first company’s to develop a consumer level 360 camera and this is a second generation version. The Theta S connects to your phone wirelessly where you can control it, or you can use the manual controls on the camera itself. This camera is perfect for vloggers who want to experiment with 360 cameras, however it has a limited video resolution of 1980 x 1080, so don’t expect your videos to be crystal clear.

Why it’s good for vlogging: The Theta S is easy to pick up and use and while it doesn’t take the highest resolution video, it can handle low light situations better than most other 360 cameras. 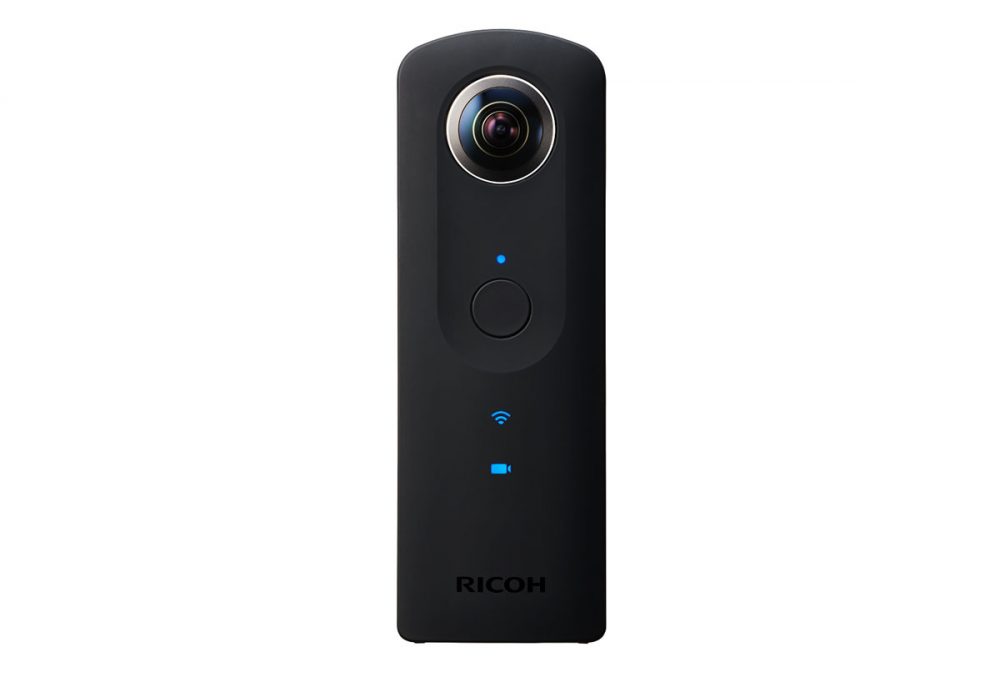 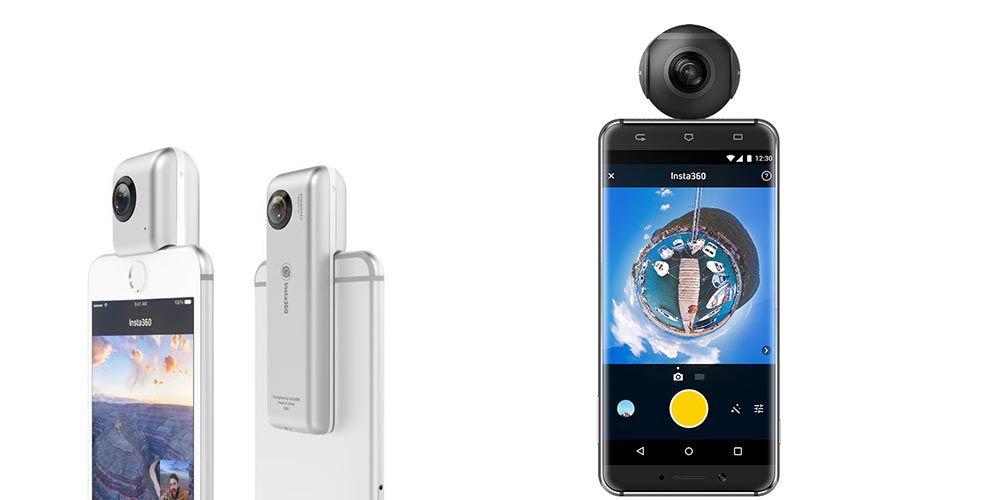 I’m grouping these two cameras together because they are both made by the same company and are close to identical (apart from design). The Insta360 Nano (left) and Insta360 Air (right) are 360 camera phone accessories that plug into your smartphone and turn it into a 360 camera. By attaching to your phone these tiny cameras are able to be portable and easy to use. So why are there two separate devices? The Nano is only compatible with iPhones where as the Air is compatible with Android phones. There are a few other differences too; the Air has a slightly lower resolution but can also use the phones battery and memory, the Nano is a completely different design and can only use its own battery and memory.

Why it’s good for vlogging: These two cameras are literally designed for the Facebook video generation. Just plug in the camera to the charging port of your phone and an app will instantly launch, allowing you to control the camera, shoot 360 video and stills and then share straight to social media. Despite their small size the image quality of these cameras is actually very good, both can shoot at 3K video resolution producing decent 360 video, certainly good enough for Facebook and YouTube.

These two cameras are also among the cheapest 360 cameras available right now and represent great value for money. If you are interested in dipping your toes into the world of 360 then these cameras are a great way to do so, just remember to buy the camera that is compatible with your phone. 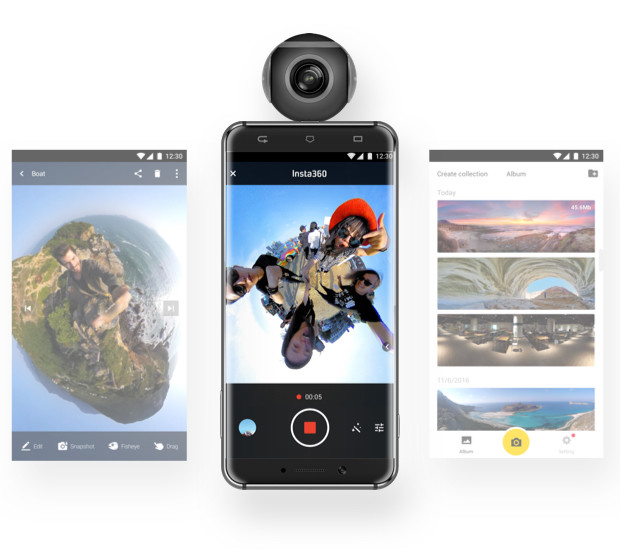 This is the most advanced and most expensive option on my list of 360 cameras for vloggers, however if you are willing to dish out the dough, it’s totally worth it. The VIRB is probably the best 360 camera under $1000 ever; it can shoot 5.7K 360 video, it has stabilization software so your videos will look smooth and it’s even waterproof up to 10m. This camera can shoot exceptionally good 360 video and photo’s are equally as amazing. This cameras possesses so many other features that to list them off now would be an endless task, but lets just say that this the GoPro of 360 cameras, and then some.

Why it’s good for vlogging: It has all the bells and whistles you could want on a cameras. Stabilization software is a huge plus because you won’t need to worry about your shaky hand as you’re shooting.

The VIRB isn’t cheap by any measure, but then you get what you pay for. If you want a “prosumer” 360 camera that goes above and beyond all its competitors then the VIRB is the only choice. 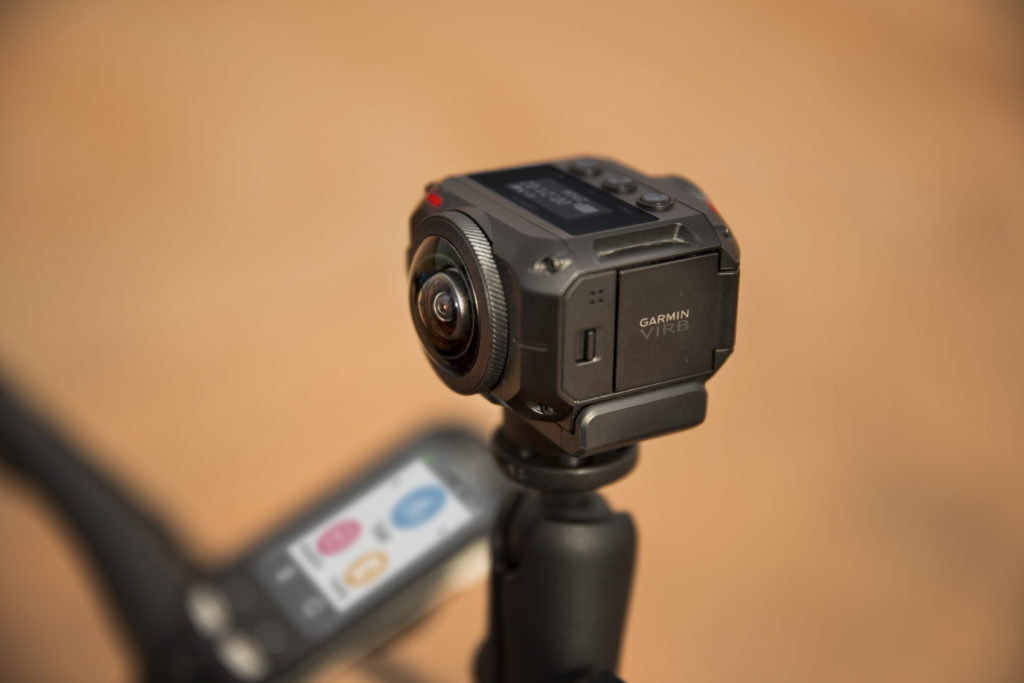